The Possibility of Dumping Mike Pence 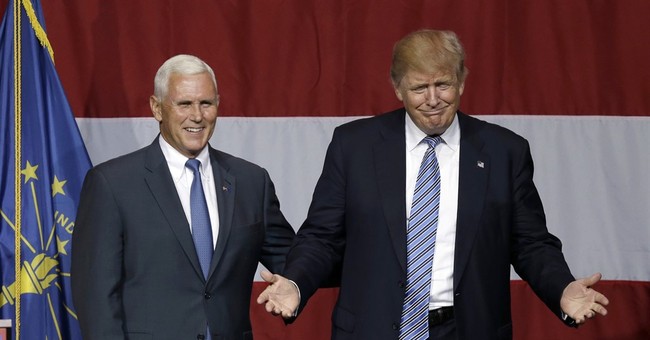 FILE – In this July 12, 2016 file photo, Indiana Gov. Mike Pence joins Republican presidential candidate Donald Trump at a rally in Westfield, Ind. Over the past two decades, Trump has disagreed with his vice-presidential pick on plenty of political issues, including immigration policy, entitlement programs and trade. On social issues above all, Trump and Pence arrive at the 2016 general election from very different paths. (AP Photo/Michael Conroy, File)

As sure as the sun rises in the East, migratory birds fly South in the winter, and monarch butterflies find their way back to Mexico, rumors and suggestions that sitting Presidents up for reelection will dump their current Vice-President abound. Although being the proverbial “heartbeat away” from the Presidency, Vice Presidential choices carry very little weight in an electoral cycle.  Most of the rumor-mongering is from the pundit class.  This year is no different than any other when an incumbent is running for reelection.

In the past, replacing a current Vice President was not out of the question.  The trend began in 1840 when Richard Mentor Johnson, Van Buren’s VP, was passed over for re-nomination, although he remained on many state ballots.  Abraham Lincoln dropped Hannibal Hamlin and chose Andrew Johnson for his second term.  In 1872, the GOP refused to renominate Schulyer Colfax and chose Henry Wilson instead.  Franklin Roosevelt managed to drop two Vice Presidents- Henry Wallace and John Nance Garner.

In the past, most of the choice of a VP was left to the party.  Sometimes, the incumbent would intervene.  For example, Andrew Jackson dumped John C. Calhoun after Calhoun voted to defeat Jackson’s choice of Martin Van Buren to be ambassador to England.  Lincoln was thinking about the aftermath of the Civil War when he chose Johnson.  FDR dropped Nance after Nance questioned a third FDR term.

Since 1944, there has been one example, but that was under very extraordinary circumstances.  In 1976, Gerald Ford asked Nelson Rockefeller to step aside.  Rockefeller became Vice President under the 25th Amendment amid the Nixon resignation.  Ronald Reagan ran against Ford in the GOP primaries and was clearly to the right of Ford.  Fearing a loss of conservative votes, Ford dropped the moderate Rockefeller in favor of Bob Dole.

Recent history suggests that unless your last name is Rockefeller, the President will not dump you as a running mate.  There have been attempts.  For example, Eisenhower tried to persuade Nixon to step aside, but Nixon refused to take the lure of a cabinet position other than State and Eisenhower was not giving that post to Nixon.  It is reported that Nixon wanted to drop Agnew in 1972 but feared losing conservative votes.  GOP strategists wanted Bush to drop Quayle and for a time Bush II considered dropping Dick Cheney in favor of Bill Frist.

Hence, there is usually talk, some rumors, and sometimes truth to the rumors.  Thus far, Trump has not signaled any displeasure with Pence.  But it should be remembered that more than any President in recent history, Trump has thrown the rulebook out the window and is rewriting it.  He has no affinity for “political conventions.”  He runs the administration much like he ran his business organization.  Pundits call it “turmoil,” but it is not.  Trump uses whoever he believes serves him the most good at any particular moment in time.

One should never say “never” when it comes to Trump.  He defied conventional wisdom and befuddled the “experts” since the day he came down those stairs in Trump Tower and announced his candidacy.  However, keep in mind the fact that there are two things which have remained constant in Trump’s first term when it comes to key players: one is Kellyanne Conway and the other is Mike Pence.