Yo! RedState FP Writers (Looking at You, Mike Ford): You're a Fascist 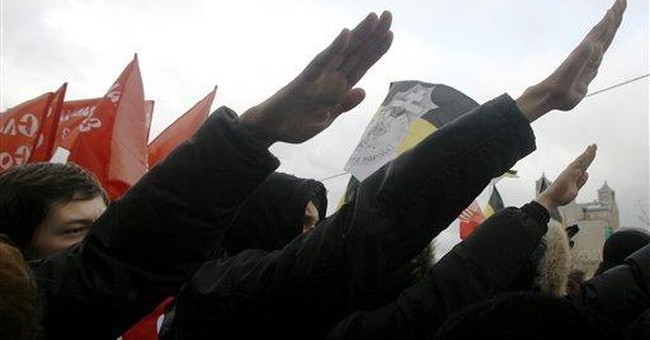 In this Sunday Nov. 4, 2007, file photo, ultranationalist demonstrators give a fascist salute during their authorized rally in downtown Moscow. Causes across the political spectrum have long used distinctive salutes to identify themselves. When Anders Behring Breivik, the far-right suspect in the massacre of 77 people in Norway, pulled his right hand to his chest and then thrust his arm out with a clenched fist after an Oslo courtroom guard removed his handcuffs on Monday, April 16, 2012; it was hardly the first time such a salute has been flashed. (AP Photo/Mikhail Metzel)

This writer likes to go to a particular Lefty website to see what the fruitcakes are talking about.  Sometimes, I chime in.  They call it trolling; I call it educating, fact-checking, or just providing an alternate to their wild conspiracies.  Along the way, I’ve been called every name in the book and told to STFU in no uncertain terms.  They have also alternately accused me of being a Russian bot and a Bernie Bro.  Rest assured, I am neither.  There have even been veiled threats such as tracking me through Facebook (which you comment through) even though that Facebook page hasn’t been updated in five years and I have moved on from many things on that page.  Which is kind of silly that these people live through Facebook.  I am not revealing the name of the site at this time… maybe another.

For example, I managed to get into a situation with one person who suggested that someone should assassinate President Trump.  Although the particular person looks like he could not get out his front door given his girth, I did fire off an email to the Secret Service.  What becomes of it, I know not.  The following is a shot of that “conversation:”

The times have indeed found us.. This is the time in a hundred years that they will look back at and wonder “why” no one just put a bullet in his head for the good of humanity..? Proof? Remember the ethical question about going back to 1935 and killing Hitler?? Would you? This is the time.. #AimForTheFace

You know…as much as people hated Barack Obama, I doubt very few people ever expressed these thoughts. You are a sick deranged man. You are encouraging assassination and I do believe that is a federal crime.

Seriously dude… you need to be investigated by the Secret Service.

He later replied that I needed a refresher course in reading comprehension and that I must be from a red state.  It is also interesting to note that while many here at Redstate are not wishing ill will upon anyone in this pandemic, they- along with the aforementioned Mr. Braunsdorf- do wish ill-will upon anyone who supports President Trump and, in fact, any “Drumpfkin” that lives in a red state.

Besides the frequent laughs and occasional threat, there has been one silver lining: my Facebook notifications, which usually number about 20 per week, have ballooned to about 259.  Gosh… I’ve never felt so popular.  My wife implores me not to engage “crazy,” but I confess not to taking her advice.

Most recently, when not trashing Trump’s coronavirus updates, they are harping on Trump’s “endorsement” of chloroquine as a grift where he will make money off its sale, how great Joe Biden is and that Bernie Sanders is a bum who needs to drop out of the race, attacking Trump’s family, especially Melania Trump and now… the subject of this article- the relief of that Crozier dude from command of the USS Roosevelt.

As one knows, our own FP writer, Mike Ford, has been quite vocal here on the subject with an analysis that can only come from someone with military experience.  You can read those articles here, here, and here.  Apparently, someone at this particular website has been using Google to look into the Crozier/Modly matter, or perhaps they are a reader of Redstate, though one doubts they have that level of intelligence.  Either way, the following occurred in the comment section for an “article” titled, “Donald Trump’s Acting Navy Secretary Stooge Hits the Panic Button;”

See here a commend [sic] from RedState, firmly supporting Modly. I wonder how they are going to spin this one:

“I’m glad Modly used blunt terms instead of beating about the bush. The profession of arms is a tough business. We have no place for folks who cannot understand that our primary purpose is to be prepared to kill people and break things in support of National Command Authority objectives. We certainly don’t violate operational security. Another thing senior leaders have to realize is that we often have to do things that we regret…are necessary. Side Note: POTUS should go ahead and forward his name (if he hasn’t already done so) to the Senate for immediate confirmation.”

Wow. It’s bad enough this person thought Modly’s statements were ok, the remainder of what he said is down right scary. These folks aren’t Republicans or even Trumpsters, they’re die hard fascists.

You see, Redstate readers, Front Page writers, Republicans, conservatives, and Trump supporters, we are all “die hard fascists.”  I did not dignify that with a response, finally heeding my wife’s advice, although elsewhere in the comments (before reading this one), I did note that perhaps Modly’s comments were a little strong, that he did apologize, but that Crozier gave away vital information outside proper channels basically saying the USS Roosevelt was not battle-ready, which is a dangerous thing to do.

In any case, I thought it prudent that we are all made aware- particularly you, Mike Ford- that you are a “die hard fascist.”

Note: tried notifying Mike Ford via Facebook prior to posting this.