Can the GOP Capture the Bernie Bros? 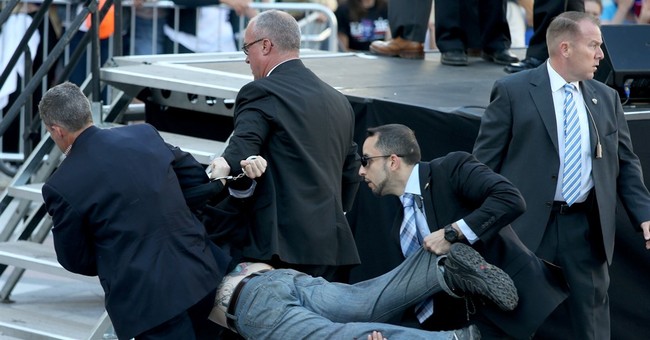 Secret Service agents remove a man from the crowd during a campaign rally for Democratic presidential candidate, Sen. Bernie Sanders, I-Vt., at Frank Ogawa Plaza in Oakland, Calif., on Monday, May 30, 2016. A group of animal rights activists briefly interrupted the Sanders rally in Northern California when they jumped barricades and tried to rush the podium. Sanders’ security stopped the protesters before they could reach Sanders, who was addressing supporters at the rally and continued his speech within minutes of the disruption. (Anda Chu/Oakland Tribune via AP) MANDATORY CREDIT

Go to most Leftist websites and one will find that the name of the ultimate Leftist- Bernie Sanders- is mud.  Some lament the fact that up to 15% of the Bernie Bros are likely and willing to vote for Trump in 2020 than for Biden.  The typical profile of the Sanders supporter is: young (under 45), particularly women under the age of 40, income under $50,000 annually, unmarried, and college educated.

It is a well-known political fact that younger voters, especially those in the 18-24 age range, are a notoriously low turnout demographic.  If they vote at all, they are usually first time voters and then only in presidential elections.  Imagine if President Trump, and the GOP after Trump, were to capture that demographic in the current and future elections.

The infatuation with Bernie Sanders among younger Americans, in a broad sense, illustrates the destructive nature of higher education.  In the humanities and social sciences, they are bastions of the Left.  In universities that stress the STEM fields, there is still political influence from the Left.  Most colleges today are less interested in imparting knowledge and critical thinking skills than they are in perpetuating a politically correct narrative of ethnic, racial and sexual injustice while stressing the oppressive nature of Western culture and civilization.  Reason has been suborned to social justice.  The university of Plato- which de-emphasized gods in favor of reason- has been replaced with a new god- social justice.

Obviously, reforming higher education should be a priority, but it is a difficult task.  Many elite universities are filthy rich with endowments showing no interest in reform.  Perhaps alternate colleges are the answer and while many colleges are using remote learning in the wake of the coronavirus, a Leftist college professor can do as much damage on Zoom as they can do in a classroom.

Besides being inculcated into a Leftist mindset in higher education, perhaps a better strategy would be to address the more immediate concerns of the typical Sanders supporter.  Student debt is one big area that motivates them.  The popularity of some on the Left with young voters is the belief that debt forgiveness- essentially a wealth transfer from the old to the young- is a winning proposition.  Before being dismissed, one should be reminded that entitlements like Medicare, Social Security and even Obamacare are, in effect, a wealth transfer from the young to the old.

Consider also the obstacles placed in the way of younger workers in the form of occupational licensing.  The barriers to entering many occupations have grown more expensive and demanding over the years.  Whether talking about the legal, medical, or teaching professions, besides being expensive, they are cumbersome.  Very few states allow a lawyer, for example, to become lawyer without going to an accredited law school.  Despite the rising costs of education, a lawyer, doctor or teacher today is no better than they were five decades ago, other than the enhanced technology they now use.

In essence, the young face a structure of entitlements that favor the older demographics while making it harder to compete with them.  Thus, they demand that the government pony up the money now.  In effect they are saying: “why not get our loans forgiven before being forced to subsidize generations of pensioners with little guarantee we will benefit in the end?”  More to the point: “why not vote for radicals in the hope of shaking up the system on the assumption that it can’t get worse for us than it is now?”  Although naive, it is also “revolutionary.”

There is very little this writer can criticize President Trump about regarding policy, but if there is one it has to his reluctance to address entitlement reform.  In a classical sense, one idea is to reduce the transfers from the young to the old (not eliminate) while removing those barriers to occupational entry.  Just spitballing one idea: how about exempting young workers from the payroll tax for two years and paying for it by means-testing high-income retirees?  It would be a symbolic first step and one that would keep the more radical ideas of Warren and Sanders at bay.  It might also peel off some voters who would have gone to Biden.

As for credentials and licensing, the coronavirus has exposed the fault lines in that area as medical professionals licensed in one state are now taking their skills across state lines with no deleterious effects.  The same could be done for any profession- law, teaching, engineering, etc.  The young have traditionally been the most mobile demographic and will seek out opportunity in new territory.

The detriments to the young were created by government, not earned in the free market that Bernie Sanders despises and wishes to destroy.  Making younger voters part of the coalition that favors freedom and opportunity will win hearts, minds, and voters.