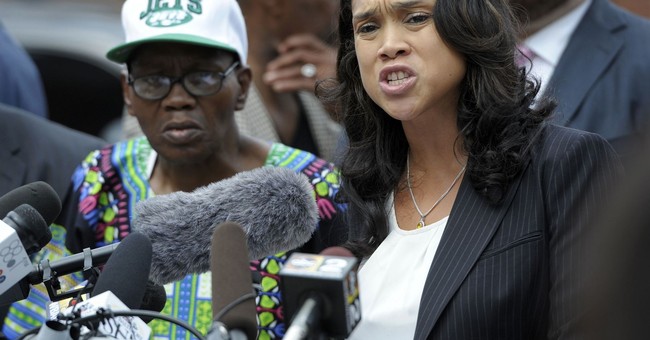 FILE – In a Wednesday, July 27, 2016 file photo, Baltimore State’s Attorney Marilyn Mosby, right, holds a news conference near the site where Freddie Gray was arrested after her office dropped the remaining charges against three Baltimore police officers awaiting trial in Gray’s death, in Baltimore. The 4th U.S. Circuit Court of Appeals will hear arguments Wednesday, Dec. 6, 2017, in Mosby’s bid to overturn a decision from a judge who ruled that parts of the lawsuit filed against Mosby by five Baltimore police officers charged in the death of Freddie Gray can move forward. (AP Photo/Steve Ruark, File)

Regardless of what one thinks of the Democrat-infused pork in $2.2 trillion coronavirus aid package, Democrats are using the pandemic to achieve another one of their pet projects on their Leftist agenda.  As if providing $25 million for the Kennedy Center and funding for NPR and the arts and humanities (one suspects we need artists to draw paintings of Covid-19), one of their pet projects centers around the notion of mass incarceration.

Their solution is simple: release prisoners because of the risk of contracting the virus in a prison setting.  This writer may be missing something, but isn’t the idea of prison or jail the ultimate form of quarantine, or self-isolation?  These are strange times.  Take the case of Baltimore, a city run into the ground by decades of rule by Democrats.  The city in many parts has become a cesspool of drug dealers, vagrants, and gangs.  We soon forget that Trump once correctly referred to parts of Baltimore as “rat-infested.”  The city set a record for murders in 2019 and are on pace to break that record in 2020.  The city’s mayor, Jack Young, came up with a novel approach to the problem.  He pleaded with would-be gang-bangers and drive-by shooters to please stop because they needed the hospital beds for those with the Chinese flu, not shooting victims.

The same day he was pleading with thugs, the notorious city prosecutor, Marilyn Mosby, said she would be dismissing pending charges for the following offenses: possession of drugs including heroin, attempted distribution of any drug, prostitution, trespassing, minor traffic offenses, open container, and urinating in public.  One is not sure whether prostitution or public urination is conducive to stopping an epidemic, but Baltimore prostitutes and those facing the urge to take a leak in public are encouraged to do so.  This occurred on the very day it was announced that there were 8 confirmed cases in Baltimore and no deaths.  As a result of Mosby’s “decision,” you are more likely to encounter a bullet than a virus in Baltimore.  Considering the fact that a heroin drug deal has got to “go down,” the heroin dealer and addict now have free reign on the city’s vacant streets.  The irony is that cities like Baltimore also deter law-abiding citizens from gun ownership.  The people of Baltimore have more than one reason to stay in their homes these days.

As bad as Baltimore is, it does not compare to the ludicrous actions taking place in New York.  There, Rikers Island is being emptied of prisoners considered to be at risk for infection.  While it is true that there were 51 confirmed cases within the prison walls when the state-sanctioned jail break began, there were ways to deal with those cases without resorting to releasing prisoners who showed no signs or symptoms.  The city and state note that those released were in the jail because of parole violations.  That may be true, but what was the underlying crime that required parole in the first place?  Maybe it was prostitution or public urination, but one doubts it.

While making the same rationalization that those released are in jail for “technical violations,” the New York Department of Corrections managed to release eight known sexual predators from the jail in Monroe County under orders from governor Cuomo.  Three of the eight were convicted of raping a child.  Where are they self-isolating?  At a Holiday Inn Express in Greece, New York at government expense.  The police chief of Greece was not even notified ahead of time that nine criminals were being put up in his town.

While this is occurring at the state level, some senators- including 14 Republicans- are jumping into the act.  They recently sent a letter to the DOJ requesting they release elderly felons deemed “non-violent” from prison.  Perhaps the experience from Utah regarding a felon deemed “non-violent” is instructive here.  Due to the fear of the spread of coronavirus in a Utah prison, 42-year-old James Haskell was released.  Just 14 days later, the non-violent Haskell held a woman at knifepoint in her home, robbed her, and threatened to murder her.

One Governor, Greg Abbott of Texas, is bucking this trend.  He signed an executive order “to preclude the release on personal bond of any person previously convicted of a crime that involves physical violence or the threat of physical violence, or of any person currently arrested for such a crime that is supported by probable cause.”  This was in response to Harris County officials attempts to release prisoners.  The FOP in Houston praised the action noting they have their hands full dealing with a pandemic without babysitting convicted felons.

Again, the Leftist policy ideas of places like New York are instructive here.  We have seen the pictures of an empty Times Square usually teeming with people, empty streets and parks, and those who venture out wearing masks.  One would think crime would plummet in the wake of the great lock-down.  But when the lockdown went into effect, murder went up 50%, rape up 18%, burglary up 35.7% and auto theft up 64% over the same time period last year.   A virus cares less about lockdowns and quarantines, but criminals care even less.

One final ironic note: it was recently announced that the mayor of Washington, DC, Muriel Bowser, ordered a virtual lockdown of the city.  Any persons or businesses found violating the order can face a hefty fine up to $5,000, or jail time.  One supposes there are a few empty cells in Baltimore, on Riker’s Island, and in Monroe County, New York.