Bet You Didn't Hear About This Story 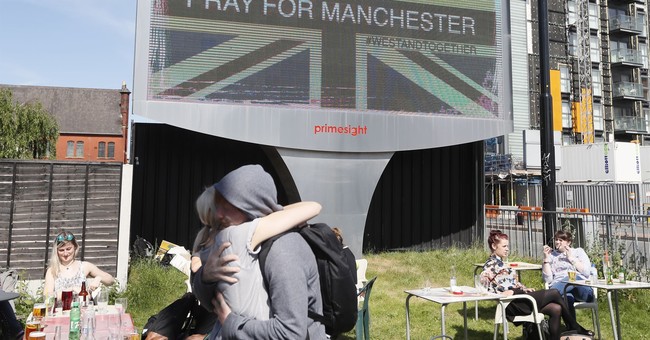 FILE – In this Tuesday May 23, 2017 file photo, couple embrace under a billboard in Manchester, England, the day after the suicide attack at an Ariana Grande concert that left more than 20 people dead. The Royal Navy rescued the Manchester Arena suicide bomber and his younger brother from the civil war in Libya three years before he killed 22 people at the Ariana Grande pop concert. Britain’s Daily Mail reported Tuesday, July 31, 2018 that the HMS Enterprise picked up Salman Abedi and more than 100 other British citizens from the Libyan coast and took them to Malta, where they flew back to the U.K. (AP Photo/Kirsty Wigglesworth, File)

While the United States (and Ireland) were busy canceling St. Patrick’s Day celebrations and Ohio was postponing their primary, a major criminal trial in Great Britain came to a close.  The trial of an Islamic extremist returned a guilty verdict.  Chances are that if there was no coronavirus hysteria gripping the world we would not have heard about it either because the media just does not like talking about extremist Islamic violence.  Most of the time, they even cover it up.

There are no calls to galvanize opposition to Islamic extremism.  We do not dig into the twisted ideologies that may have motivated a violent act.  Yet, when some white guy shoots at a school, we see the polar opposite.  With extremist Islamic violence, we declare it a rarity and call for community solidarity against hate.

It is that mindset, not a preoccupation with a virus, why we heard crickets from the media on March 17, 2020 when a jury returned a guilty verdict against Hashem Abedi who was held responsible for the death of 22 people at an Ariana Grande concert in Great Britain.  Talking about Islamic extremist violence is verboten in today’s politically correct culture and discourse.  To do so would upset the multicultural apple cart.

You would expect that 22 murders would generate some discussion if for no other reason than to take people’s minds off the coronavirus.  Instead, the media was handwringing over what to properly call a virus.

Hashem Abedi aided and abetted his brother, Salman, in the act of terrorism although it was Salman who actually detonated the bomb.  They purchased the chemicals together, purchased the nuts and bolts that increased the deadliness of the bomb together, Hashem’s fingerprints were found in the car where the bomb was kept and the apartment where it was constructed.  With the guilty verdict, Hashem Abedi is now one of England’s most notorious mass murderers.

So… where is the debate?  Where is the outrage?  ISIS-inspired acts of terrorism within the past five years has led to scores of stabbings, bombings, and motor vehicle attacks.  Yet where are the ubiquitous hashtags, gatherings of activists, and pleas to weed out extremism, Islamic fascism, and hatred?  When you see those blue lawn signs saying “Hate Does Not Live Here,” does that include the hatred exhibited by Islamic extremists?

Compare this with the reaction when a few hundred people showed up to protest the removal of a statue in a park in Charlottesville, Virginia.  One person unfortunately died, but you would have thought a bomb exploded at an Ariana Grande concert in Charlottesville, Virginia.  The ensuing violence was held up as evidence of a warped mentality that existed in society and had to be immediately confronted and eradicated lest we see the second coming of Hitler.  Why is it we never hear those sentiments in response to terrorist acts by Islamic extremists in the wake of violent actions that make the events of Charlottesville look like- excuse the expression- a day at the park?

In fact, we hear the opposite.  We are told not to get angry, or talk about it too much.  Don’t investigate it or look at the Muslim community, among which terrorists live and operate, too closely.  Don’t consider the supremacist ideology that fuels acts of terror.  In fact, don’t even name it or call it out for what it is for fear of being labeled an Islamophobe.  You will told you are fanning the flames of racial hatred (Islam is not a race) and be told that you– not they- are the true threat to the fabric of society.

When it comes to far-right groups, they must be fought, defeated, and eradicated we are told.  The response must be unforgiving.  But with Muslims, they must be “de-radicalized,” which means, one supposes, some form of therapy for you see, they are not fully in control of their ideological convictions and the crimes they commit.  By using the phrase “radicalized,” it infers something was done to them.  They need our help, not our scorn.  The right wing fascist must be defeated, but the radical Muslim gets the therapist’s couch and pitied.

Countries and societies are loathe to answer some important questions.  First among them is whether multiculturalism made us stronger or weaker and has it divided us?  Why are there so many people who feel un-integrated, particularly in Europe?  Why do people born here or in Europe and have lived here and in Europe a very long time loathe their adopted countries so much they resort to violence?

Avoiding these tough questions is easy and they contribute to the collective amnesia after every act of Islamic violence.  Thirteen students were killed at Columbine and twenty students at Sandy Hook and there was debate for weeks on end about those terrible acts.  When 22 people- many of them as young as those murdered at Columbine or Sandy Hook- are killed in an act of Islamic terrorism, we hear little debate, if any.

In fact, in the aftermath of the bombing, the song “Don’t Look Back in Anger” by Oasis became the anthem of national grieving over the terrorist attack in Manchester.  It was not because the song was particularly good; it was because of the official obsessive concern with stifling and neutering the emotional and political responses to radical Islam.  As the names Dylan Klebold, Eric Harris, Adam Lanza, and Dylann Roof who killed, respectively, 13, 20 and 9 people have passed into infamy, the names of Salman and Hashem Abedi who killed 22 people and injured and maimed hundreds more are tossed into the memory hole.

People did not “look back in anger.”  They did not look back at all.

UCLA Anderson Forecasts California Bounced Back Better Than Florida: Someone Needs to Lay off the Weed
Jennifer Oliver O'Connell

The Coma Before the Storm
Townhall
'You are the ones with the perversions': Stand-up comic wants to know why Matt Walsh doesn't find joy in a young girl twerking
Twitchy
HOT TAKES: CNN's Chris Cillizza Tries Giving Rand Paul a U.S. History Lesson, Probably Now Regrets It
Redstate
BREAKING: The Babylon Bee Scores a Major Victory Over The New York Times
PJ Media