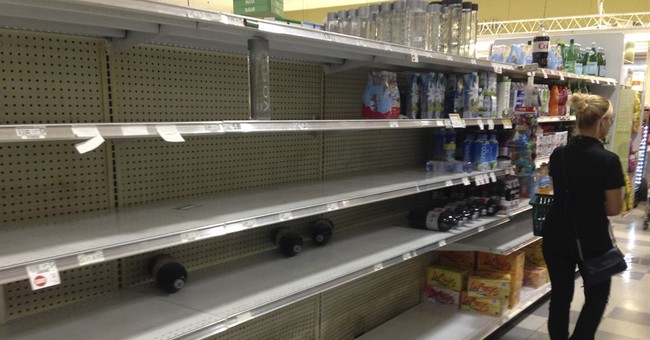 A shopper walks by the empty shelves where bottled water normally would be, Wednesday, Oct. 5, 2016, at a grocery store in Hollywood, Fla. Hurricane Matthew marched toward Florida, Georgia and the Carolinas and nearly 2 million people along the coast were urged to evacuate their homes Wednesday, a mass exodus ahead of a major storm packing power the U.S. hasn’t seen in more than a decade. (AP Photo/Wilfredo Lee)

When the panic passes and the Wuhan virus is under control or hopefully eradicated, Americans across the country will put down their remotes, toss that Netflix subscription, and head back to work; that is, if they have a job to return to.  Politically, we can wax philosophical and surmise that some will jump to conclusions that capitalism has its drawbacks in handling pandemics and emergencies, or that recent events created a fertile ground for socialism, fascism, or socialist fascism (a/k/a Nazism).  We shall see.  I kind of knew this was bad when ISIS issued a travel warning to terrorists heading to Europe.

One thing is certain, though.  The stock market will come roaring back as Weyerhauser, Georgia-Pacific and Kimberly-Clark lead the charge.  Perhaps they will combine forces and start a hostile takeover of Apple or Google.  Most likely, there will be some new coronavirus mutate from this one because viruses, and even bacteria, are tricky devils that way.  But at least everyone will be prepared with their metric ton of toilet paper stored in the spare closet.  The bright spot is that everyone will have a cleaner bottom, so we should be thankful for that.

Economically, the country will come roaring back as millions are freed from exile in their homes.  Leading that charge will be bars and restaurants, provided the restaurant had a liquor license and assuming the bar or restaurant has not gone financially under.  Pennsylvania is instructive here.  When governor Tom Wolfe declared “non-essential” businesses closed, he failed to realize that sucked in liquor stores, many of which are state-run.  Pennsylvanians gave up bars, but not home consumption and the governor had to reconsider.  Thankfully, in my neck of the woods, New Jersey governor Phil “Squirrel Face” Murphy realized that liquor stores were “essential,” especially if you were holed up in your home for a month.  (Hint: Actually, liquor and beer are, objectively speaking, not essential, but I’m glad my local establishment is open.)

Speaking of being holed up in your home with family and loved ones, will we see a spike in births in about nine months time?  Of course, being holed up in your home for weeks with loved ones, we may also see the opposite: a spike in divorces, or possibly missing loved ones.  Either way, there is a silver lining if you are an OB/GYN or a lawyer.  Once again, like cockroaches, lawyers will benefit from this.  They’re sort of like viruses themselves mutating to meet the societal needs of the post-apocalyptic world.

One of the first actions taken was encouraging working from home which benefits the professional class, but not the bulk of the American workforce- the chambermaid, bartender, waitress, etc.  Plus, it is kind of hard to assemble a car or build a house from home.  But, this proved that remote working from home can work and perhaps those trips to the office are not all that necessary.  But, this writer has another theory.  Workers will be clamoring to get back to the office if for no other reason than a realization that a toddler hanging off your leg as you pounded out a memo from your kitchen table was not exactly nirvana.  Hence, there is likely to be a newfound enthusiasm for dragging yourself to the office five days a week.

Twitter is brutal.  Some people are referring to the virus as the “boomer remover.”  But not everyone over the age of 60 contracted the disease and of those that did, not everyone died.  These people will look at this as a new lease on life and two things will happen: churches will be filled after which they will fill the bars.  Move over hipster…there’s a new clientele in the bar.  Meanwhile, that influx of babies about nine months from now will inevitably be called the Corona Generation and there will be a spike in the sale of Mexican beers…with a twist of lime.  Speaking of the Corona Generation, they will have the cleanest hands and cleanest butts of any generation as reams of toilet paper are bequeathed to them in wills.

Key workers on the front lines will be expecting greater respect after this.  These are the nurses, the cleaning people…and the grocery store clerks and stockers, especially the guy responsible for Aisle A7 where toilet paper can be found, followed closely by the guy responsible for Aisle A19- bottled water and canned juice.  Perhaps they are right to demand pay raises for their sacrifices, but as sure as night follows day, they will not get one.

The movie industry will come back stronger than ever after the re-release of “The Stand.”  One wonders what the appropriate length of time is considered fine for a comedian to make a “virus” joke?  Will protective hospital gowns and masks be the new fashion statement?

We hear about “touching” good stories coming from all this: the little boy who takes groceries to his elderly neighbor, the neighborhood that gathered supplies for hospital workers, etc.  Is it possible that society will emerge from its self-exile a little kinder, gentler, and more giving?  Yeah…keep dreaming.

The Media Hates You And Is Shocked That You Hate It Back
Townhall
Oh FFS! Middle-aged white woman asking Black doctor if she works at a store SO triggers her she tweets entire thread about racism
Twitchy
Blinken Remarks About Hamas/Media Building Israel Leveled Cause a Furor
Redstate
Diner Owner Sublimely Turns Tables on Snitches to COVID Hotline – 'We Deserve to Know Who We Can Trust'
PJ Media