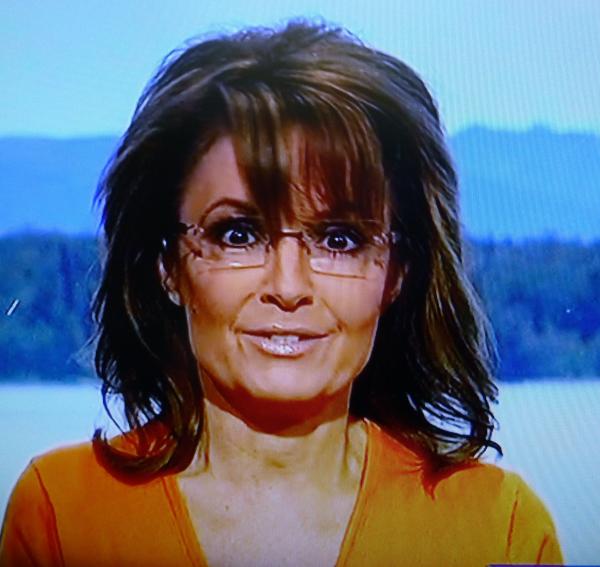 This writer hopes to make this a bi-weekly compendium of crazy comments made by supposed conservatives.  Of course, not being a real conservative, Donald Trump will obviously figure big in these discussions.  And naturally, comments by Trump supporters will also figure prominently since it is the unhinged leading the unhinged.

First up, Sarah Palin- a/k/a  the Caribou Barbie…the Wasila Wombat herself.  At a Trump rally in San Diego, she had this gem of a statement:

“Trump came roaring in through this primary, and he blew the lid off the corrupted and corroded machine. He was like a golden wrecking ball. He wrecked what needed to be wrecked in order to shine light on the shenanigans, in order to allow us to rebuild because, see, Trump builds things. He builds big things. And with optimism. And with common sense. He solves problems!”

Pure Palin poetry at its zenith.  Seems that The Donald has a new nickname courtesy of Palin: “The Golden Wrecking Ball.”  In psychiatry, there is a symptom noticeable in schizophrenics called “word salad-” a string of unrelated words, some made up, strung together to form an incoherent sentence.  Perhaps Palin was experimenting with some Southern California LSD, but she is exhibiting all the symptoms of schizophrenia at this point.  Of course, being the President of the United States is a lot different than building tall buildings decked in gaudy red neon with your name on it.  But, I digress…

He went on to say that the water situation was “insane” and if elected, he would solve the problem.  His solution?  He’s going to “If I win, believe me, we’re going to start opening up the water so that you can have your farmers survive.”    Yep…Donald Trump is going to turn on the water in California.

This writer will admit that some of the problems in California are attributable to ridiculous regulations, but it is also disingenuous (and stupid) to assert there is or was no drought.  Perhaps there is a solution.  Trump can build a series of yuuuge buildings along the West Coast to divert storms from the Pacific Northwest towards California.  Seattle doesn’t need all that rain anyway.

Kimberly Guilfoyle at Fox News is always good for some goofy statement and we have one, which is funny considering Trump calls Elizabeth Warren “Goofy.”  I will admit the grandmother of the Occupy Wall Street movement, as she proudly sort of touts, is goofy.  That is especially true considering that OWS was invented by some Canadian anarchist advertising firm.  But Trump also calls Warren “Pocahontas.”

This is in reference to the fact that Warren is supposedly 1/32 Cherokee Indian, a fact she used to her advantage to gain employment in a nice New England Ivy League school that shall remain nameless, but is in Massachusetts.  Of course, most people born in Oklahoma can make a claim of having Cherokee Indian blood.

Personalizing the obvious insult directed against Warren by Trump, Guilfoyle claimed it could actually be construed as a compliment because…wait for it… at one time Guilfoyle dreamed of being someone like Pocahontas.  Yes!  She actually said that.

I will admit that I used to regularly watch Fox’s The Five (on which Guilfoyle appears) until Eric Bolling started to show his Trumpophile tendencies, soon followed by Guilfoyle.  Greg Gutfeld is the mainstay curmudgeon/libertarian who makes the most sense and is unafraid to hold the other’s feet to Trump’s fire.  And Dana Perino is insightful and generally neutral.  But when you start agreeing more with Juan Williams than with the supposed conservatives on the panel, something is wrong.

Another digression: Eric Bolling supports Trump because they have something in common- neither can form a sentence above a 5th-grade level.  As for Guilfoyle, she may be pleasant to the eyes, but grating to the ears.  If you must watch this show, mute her parts.  You really won’t miss anything important.  And by the way, the Pocahontas reference is meant to be an insult against Warren, not a compliment regardless of Kimberly Guilfoyle’s childhood fantasy wishes.  Duh!!