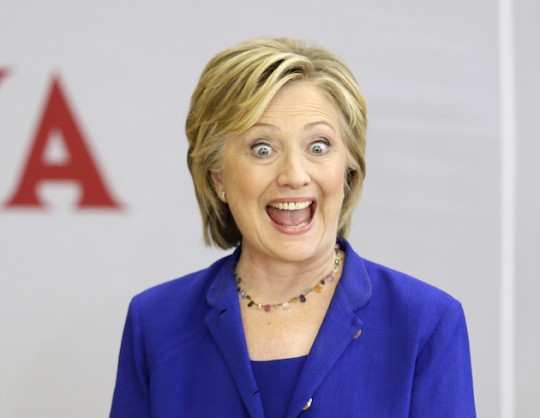 February 1st:  D-Day…or should I say I Day.  You know…as in REDACTED Iowa?  Haven’t had this many butterflies in stomach since 2008 and Barry was challenging me.  This year its Bernie.  WTF?  Sitting in hotel awaiting results.  Have to find Bill though.  Snuck out, said he was going to bar.

February 2nd:  Well it was close but we won.  Thank God for two-headed coins!!  So long Iowa.  That is the last I saw of this REDACTED state.  Take your pig REDACTED and shove it.  I’m heading for NH, then SC and NV.  REDACTED those pork barbecues.  I don’t even like barbecue!  Oh and that other guy dropped out.  So Bill is here with me and Chelsea is keeping him on a short chain while I campaign elsewhere in NH.  Have to be careful here according to Huma.  Lots of these people are feeling the Bern.  I still find that REDACTED creepy.

Feb 3rd:  Crap!!! Bill is in SC and Chelsea in Minnesota.  Can’t leave that man alone by himself.  Especially in South Carolina.  What do I care?  I’m not running against an empty suit black dude from Illinois this time.  What else?  Oh yes…this NH town hall thing.  Blah blah blah.  The only reason Bernie leads here is because people from NH inbreed as much as the people from VT.  Why the REDACTED do you think I got the hell out of Arkansas??  Oh…I made the cover of Time magazine.

Feb 7th- Bill obeyed Huma and is back in NH with me.  Had to knock on doors.  God!  I hate this part of this job.  Appeared on CNN and Tapper allowed me to play the va-jay-jay card.    Now its off to Flint, Michigan.  OK.  Thank God this trip is over.  BTW- the water sucks here in Flint.

Feb 9th- Oh REDACTED.  Bernie won and won big.  Haven’t taken a REDACTED whipping like that since 2008.  Well, Huma just got off phone with DWS.  Things are looking better now.  So the prune beat me by 20 some points- I get the delegates!!!

Feb 11th- Oh Jesus.  Another REDACTED debate.  WTF?  I thought DWS had this covered.  Thankfully on PBS which no one watches anyway.  This is getting cumbersome.  I’m gonna win because I have the CBC on my side now…I think.  But that  old prune is putting up a fight.  There is a special place in hell for that man.  Getting lots of comments on my debate performance.  People really liked my golden yellow Nehru jacket pantsuit.

Feb 12th- Staying in WI…in the winter(!).  BOO!  For a fundraiser.  YAY!  Then MN, NJ and RI all in one day.  Wow!  Thank God for that all those donations that got me this plane.  That old van I used….that was light years ago.  But I’m retiring that piece of REDACTED.  Raising lots of money from Americans overseas now.  Being Sec of State sure pays off.  Hahahaha.

Feb 13th: Well its not Iowa thank God.  Gotta fund raise.  Flying from Wisconsin to SC to Minnesota in one day is getting REDACTED expensive.  Bill in Rhode Island.  Well, that is what Huma tells me but you never know with that man.  Geez- sitting here in hotel room watching this GOP debate.  DT hammering Bush over 9/11.  He obviously got that Code Pink memo from Cindy and Mike.  You go Donald!

Feb 14th:  Dear diary- spent Valentine’s Day campaigning in Nevada.  Picked up some newspaper endorsements.  Does anybody read newspapers any more?  I have my cell phone to get the news.  Actually I have several cell phones.  Bill is elsewhere but did call and sent me the funniest Valentine’s e-card.  He’s so romantic.  Well, gotta get some beauty sleep before I campaign in Nevada some more.   Think I’ll make a impromptu stop with some cocktail waitresses.  Gee- I hope they’re young.  Oh who cares?  Young women are stupid for going to Bernie.  There IS a place in hell for anyone who doesn’t vote for me.  Its about time I put this REDACTED to work and if it means using my genitals to get elected, by golly so be it.  There I said it!  REDACTED you!!

Feb. 15th:  So Bill gets to stand in for me in Florida while I get diverted back to Nevada.  Life is soooo unfair.  Huma said this will be the day my campaign will be remembered for- barking like a dog.  God—I was so cute doing that.

Feb 16th:  Ah…the good, the bad, and the ugly of campaigning all in one day.  For the bad- had to go kiss Al Sharpton’s REDACTED in Manhattan.  The ugly?  Al Sharpton.  The good?  Fundraisers!!!!

Feb. 20th: Made it through NV caucuses a winner.  This prune dude- Sanders.  He’s starting to be a real REDACTED and pain in my REDACTED.  May have to pull a Vince Foster on his REDACTED!  What was that stuff Putin used?  Polonium or something?

Feb 21st:  OK…well barking like a dog didn’t go over too well.  Huma was right.  People like llamas more.  What sound does a llama make?  What else?  How can I forget?  Money!!!  Celebrating my Nevada win by attending some fundraisers.

Feb 22nd: Another day of fundraising in sunny California.  This is the part I like the most.  Talking to just plain everyday millionaires and billionaires.  Well…of to London, England.

Feb. 25th:  OK back from England.  Time to set my sights on SC where I hope to destroy Bernie.  South Carolina…where I get to talk about systemic racism and that kind of thing.  Gotta keep the black folk happy.  After all, black lives matter, right?  Just to show my solidarity with the Negro folk, agreed to appear on Steve Harvey show.

Feb 27th:  So I won SC.  Did anyone expect otherwise?  Even if I lost, I would’ve won the majority of the delegates.  Must really be REDACTED off Bernie right now.  I’m gonna leave him in my dust.  Vroom….the Hillary campaign rolls on.  I feel like Mel Gibson in those Mad Max movies.