Donald Trump: The Code Pinker of the GOP 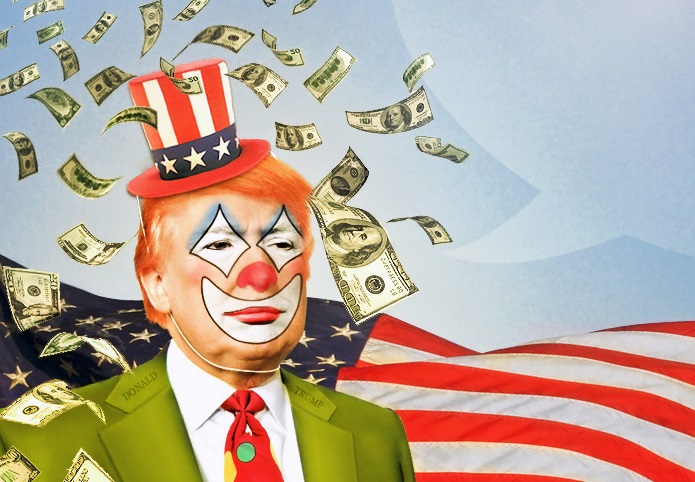 Donald Trump feeds on publicity and to gain publicity he throws out controversial statements.  His most recent debate performance which has been panned by every sane person (which eliminates Trump supporters) was just such an example when he went on the attack against George W. Bush.

The falsities spewed in that debate and its aftermath on the many talk shows are the stuff of conspiracy theories.  One wonders why he has not yet suggested that the CIA bombed the World Trade Center or launched a missile at the side of the Pentagon on 9/11/01.  As others have more eloquently put it, Trump has climbed into the sewer with Michael Moore, MoveOn and Code Pink.

To assert or insinuate that Bush was complicit in the terrorist attacks on 9/11 is almost treasonous.  Because Trump knew people who died in the World Trade Center seems to make him believe he can make these outrageous statements.  Although I did not personally know someone, I knew the father of someone- a very important person who died in that tragedy- John O’Neill.

O’Neill’s first day on the job was September 11th, 2001.  After a distinguished career in the FBI, he resigned and was hired as chief of security for the World Trade Center.  His brother was to meet him in New York that day to interview for an IT job in the WTC.  In a strange twist of irony, he could not get a train out of Washington for New York because of the terrorist attacks.  Otherwise, two O’Neill brothers would have died that day.

As per his father as he told me in a roundabout way, when his son was with the FBI he was in the counterterrorism unit and they were on the trail of Osama Bin Laden.  Contrary to Trump’s assertion and his statement that he wrote about bin Laden before 9/11 in his book (big whoopie do!), the FBI and the CIA were well-aware of Al Qaeda and bin Laden since at least the first attack on the WTC during the Clinton administration.  According to his father, on at least two occasions they had bin Laden in their sights and could have “taken him out-” once in Yemen and once in Saudi Arabia.  On both occasions, they were denied permission by “someone in Washington.”

As for the oft-cited National Intelligence Estimate- the alleged smoking gun against Bush- if Trump or anyone took the time to read it they would have seen with their own eyes that in no way did it suggest that Al Qaeda was going to highjack planes and fly them into buildings in a coordinated attack.  It was a broad-based warning. devoid of specifics, that Al Qaeda remained resolved to having a terrorist attack on American soil.  Well, duh!  We knew that going back to the first WTC attack and subsequent interviews by the press with bin Laden himself.  The NIE stated the obvious.

Previous articles here have noted that weapons of mass destruction were, in fact, discovered in Iraq.  The mere fact that Hussein had used them on his own people in Basra and against the Kurds is proof that he was in possession of these weapons.  Perhaps Trump misunderstands what a WMD is and believes it is only a nuclear weapon.  Perhaps he does not consider chemical or biological weapons a WMD.  Of course, that would only highlight his ignorance.  Remember that this is a candidate who does not know what the nuclear triad is after all.

Perhaps the only criticism against George W. Bush and the decision to go into Iraq is twofold.  First, the administration may have relied on faulty intelligence that did not correctly characterize the WMD threat.  But if one remembers, the United States intelligence services were not alone.  Intelligence services from Germany, Great Britain, France and Israel had come to the same conclusions.  If Hussein did not have nuclear aspirations, why would Israel have bombed a nuclear facility years previous?

The second potential criticism is that the administration fumbled the execution of the war or, more specifically, the aftermath of the war.  For that, this writer has always blamed then Secretary of Defense Donald Rumsfeld who did completely mangle the affair and flipped it off with a “democracy can be messy” attitude.  However, once it was determined that things were not going as planned, it resulted in the troop surge and counterinsurgency efforts that stabilized the country.  Unfortunately, despite the best efforts of the Bush administration, an agreement on leaving troops behind in Iraq could not be reached and Obama had no stomach to pursue that avenue.  Thus, ISIS was formed and that can be traced to Obama’s reluctance to work out an agreement.  I have always been of the opinion that having expended so much money and so many lives, screw an agreement and just tell Iraq we were leaving behind troops to ensure stability.

Jeb Bush was absolutely correct when he asserted during the debate that while Trump was building a reality show, his brother was building a security apparatus to keep the country safe.  Those are facts!  Because the World Trade Center and the Pentagon were attacked on September 11th, Trump asserts that Bush did not keep the country safe since they occurred “during his reign.”  One inconvenient fact gets in the way of that assertion: these attacks were planned well in advance of September 11th, 2001 and were at least three years in the making.  That puts the genesis of this attack squarely during the presidency of Bill Clinton.  Perhaps if was not so busy “having a cigar” with interns in the Oval Office, things may have turned out differently.  Thus, Rubio is certainly on point in noting that the Clinton administration took their eye off the ball well before George W. Bush was sworn in as President.  And going where Rubio was reluctant, yes- Bill Clinton is indirectly responsible for 9/11.

These statements by Trump were obviously the result of watching Michael Moore’s Fahrenheit 911 or a reading from the Code Pink website.  As such, he has done a huge disservice to the truth.  This fact alone should disqualify this windbag from the nomination.  Candidates sometimes stretch the truth, but this is just plain wrong and shows his ignorance in this matter and of historical facts.  One fully expects Cindy Sheahan to endorse Trump any day now.  Perhaps the Trumpettes will discard the brown shirts and start wearing pink.

'End of the Era'? What Is CNN's Don Lemon Going to Do Now?
Townhall
'Not even popular in the quasi-honeymoon stage': Glenn Greenwald BRUTALLY honest about how unpopular Kamala Harris really is and OUCH
Twitchy
Report: Biden Snapping and Losing It in Profanity Laced Tirades at Staff
Redstate
Legacy Media Finally Calls Out the 'Experts' for Their COVID-19 Misrepresentations
PJ Media