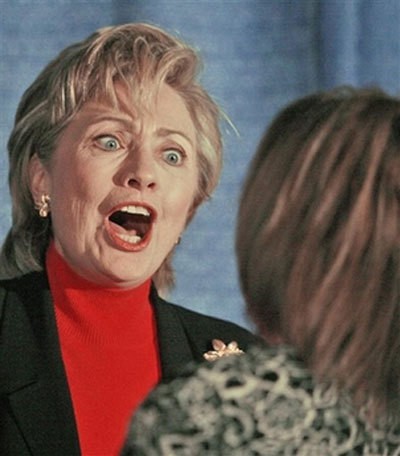 In my continuing effort to inform readers about the inner workings of the strange mind of Hillary Clinton, I have obtained some more of her personal diary entries.

1/1/16:  Spent day with friends going over upcoming events and rolling out Bill in NH.  They have me going to NH also this week when I will make the big announcement.

1/3/16:  Spent day in NH taking questions from school children.  They ask some tough ones like the one about what book I most recently read.  Finally, something substantial on the campaign trail.  Things haven’t quieted down about Bill and Trump.  I need to watch what I say in public.

1/4/16: REDACTED.  Back to Iowa!  Yuck!  Spoke to Iowa radio station about  gun control.  Then more of these  enlightening town halls when I get to speak to  everyday people.  And Bill hit the trail in NH.  He gets the good job!  Have to talk to him about putting makeup on that lip sore.  That man!  What will I ever do with him.  Hahahaha.  But, back to me!  In Iowa and doubled down on Obamacare.  Wait a cotton picking minute (Huma said to practice my Southern roots).  What’s this about Bernie gaining on me here?

1/5/16:  Today I unveiled my plan to combat something that is on every voter’s mind- autism.  I so want to be the president of everyday autistic people everywhere.  To prepare, Huma cued up a screening of Rain Man.  That Dustin Hoffman…  What else? Oh yeah- Obama’s gun control announcement.  America- you haven’t seen anything yet when it comes to gun control.  Just wait until I’m POTUS.  Then it was off to an interview with Chris Matthews.  I know…I know- no one watches MSNBC which is exactly why I chose Chris Matthews to interview me.

1/9/16:  Yikes!  Had to attend same event as Bernie and that other guy running against me.  Stood good distance from Bernie so that his spittle didn’t stain my pantsuit.   Although he did almost poke out my eye with his waving gestures.  But Vegas was fun.  As Bill says, what happens in Vegas stays in Vegas.  And Bill is doing what he does best- raising funds for me.  He’s been to NY, AZ and WA!  What a man!  I know…other women have said the same thing.  What else?  Oh yeah- broke out the big guns and Lena Dunham is campaigning for me in NH and IA.  Hmmm…maybe Lena and Bill can hook up since they have so much in common.  I don’t mean “hook up” that way…I mean campaign.  God knows what they have their fingers in these days.

1/10/16: In California to recruit Asian-Americans to my side.  I so want to be the president of everyday Asian-Americans who married Latino small business owners who later turned out not only to be gay, but be suffering from autism while entering the country illegally.  Got chance to attack DT over immigration and diversity.  And even got in a few fundraisers along the way.  Ch-ching!

1/11/16-  Wow!  This comes as a huge surprise.  Planned Parenthood endorsed me.  That is the good news from today.  The bad news is that Chelsea hit the campaign trail.   BTW…did you see me on Ellen DeGeneres show?  Gee…I am so authentic!

1/12/16- OK, time to take this liberal REDACTED to a new level.  Today I proposed a 4% surcharge on millionaires.  That’ll do it.  Wait….Huma just e-mailed me.  Bernie is gaining on me in IA and NH.  REDACTED!  This is 2008 all over again.  And now I’m getting fallout from that forum last night!  Shouldn’t have equated police with terrorists.  Who am I kidding?  I don’t even know what terrorism is!  Doesn’t it have something to do with a YouTube video?  Thankfully, I had a fundraiser today and Michael Bolton serenaded me.

1/13/16-  Went on GMA and interviewed by George.  Good to see him again.  Hardest question?  What I would do with my winning Powerball ticket.  Bill is in NH doing damage control after Chelsea spoke.  I told her to just smile and show teeth, not to say anything.  Damn that girl!

1/14/16- Fundraisers and Jimmy Fallon.  Such is the life of the Democratic front runner.  Well, got this debate Sunday and then MLK day.  Gotta come up with something to say about black folks.

1/15/16-  Dear diary:  Bill is in that REDACTED state Iowa while Chelsea is running a fundraiser in Chicago.  Me?  Holed up in at a Chipotle with Huma and John preparing for the debate.  Hahahaha….debate.

1/16/16- More “debate” prep.  Issued that statement on release of Iranian  prisoners.  Gee- this talking out both sides of my mouth thing sure is paying off.  And did you hear?  Chelsea pronounced jingoistic and used it correctly in a sentence.  I am so proud of my girl.

1/17/16- Went on ABC with George.  He asked a question or two.  Had to get back to debate prep.  Thanked him again for campaign contribution.  Be back after debate.  OK- back now.  All that prep paid off.  Think I threw some water on the Bern.  He may have the principles, but I got the money, so REDACTED you Bernie.

1/19/16- Dear diary: just finished tough day of campaigning in NC and TX.  In Texas, held at home of Muslim business owner.  That’s another reason I’m running- to be the president of business-owning Muslims  everywhere.  Gee- that’s a lot of gas stations and 7-11’s.

1/22/16- So they ship me off to that REDACTED Iowa again and Bill gets to play with donors in Nevada and La Jolla.  Something’s not right here.

1/23/16- Today was another anniversary of Roe decision.  I threw my support behind  purveyors of women’s health.  Jamie Lee Curtis is on the trail in IA for me today.  Yay!!  Free yogurt for me.

1/26/16: Besides Lena Dunham and Curtis, got another one on my side- Billy Jean King.  That just wrapped up the votes of feminist serial liars, out-of-work Hollywod actresses who have resorted to television commercials, and gay female tennis greats.

1/29/16:  Dear REDACTED diary!!!  That REDACTED mother REDACTED Bernie is REDACTED everything up!!!  They promised me I’d be in NY  raising money, but now I gotta go to Iowa and answer questions from those REDACTED hillbilly farmers.  Who cares?  After Monday, do they think I really care about Iowa?  I can’t stand the smell of that state.  But, here I am stuck in Podunk, Iowa answering stupid questions and making like I feel these people’s pain.  Argh!!!  Why doesn’t he just go back to Vermont and make maple syrup.  And Ben and Jerry’s has an ice cream dedicated to that hunchbacked prune!!!  Where the REDACTED is my ice cream???  And Bill…great help he is.  Where is that 1996 Bill?  I swear- I think all that REDACTED and all those cigars made him brain dead.  OH!!!!  I am so frustrated.  And REDACTED the intelligence community.  I- Hillary Clinton- gets to decide what’s secret and not secret!!!!  This weekend is turning into a REDACTED nightmare.

1/30/16:  Damn it- I should be in NH, not Iowa!  That damn Bernie.  Got to campaign with Bill which means I at least know where he is.  Been drawing crowds in the 1500 range.  Gotta do something to stop them from checking their cell phones and playing Angry Birds or Words with Friends during my speeches.

1/31/16.  Dear diary: Should not be this nervous on eve of Iowa caucuses.  Butterflies in stomach.  Or is Bernie in my stomach.  Can’t tell.  This wasn’t supposed to go down like this! REDACTED you Iowa.  Just you wait…when I’m POTUS we’ll see what you get from me!  Can’t sleep.  Too nervous.  And where the hell is Bill?