It would appear that by virtue of her solid performance in the second debate, attention has turned to Carly Fiorina.  The criticisms have come hard and heavy and center on (1) her tenure at Hewlett-Packard, (2) her past “conservative” record, or lack thereof, and (3) her run against [mc_name name=’Sen. Barbara Boxer (D-CA)’ chamber=’senate’ mcid=’B000711′ ] in 2010.  With increased popularity comes increased scrutiny and in the interest of the vetting process, this is a good thing.  However, there seems to be a tendency to rip apart any front runner or someone surging in the polls for their lack of conservative purism (unless their last names are Cruz or Jindal).

Many people are portraying her as one of the worst CEOs in history.  No doubt, people have seen this chart recently, but it bears explanation again: 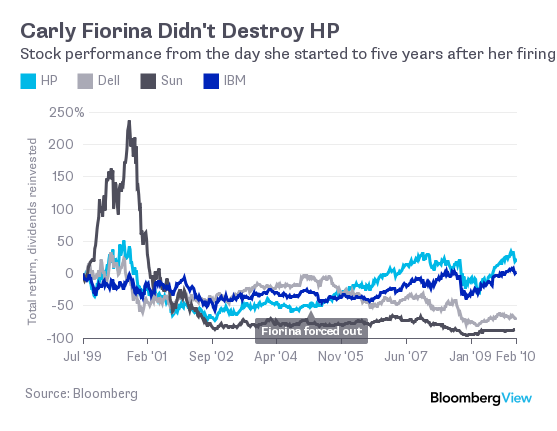 The basic analysis is that in hindsight, what Fiorina attempted at Hewlett-Packard paid off dividends after her departure.  Much of what she was attempting with the Compaq merger- which Trump described as the worst business deal ever- has, upon review, shown to pay off.  Five years after her departure, H-P’s stock outperformed all the major competitors.  For a more detailed analysis of the merger, its effects, and Fiorina’s pros and cons:  https://www.gsb.stanford.edu/insights/compaq-hp-ultimately-urge-merge-was-right

Suffice to say, the accusations that she ran the company into the ground or that she was one of the worst CEOs in history is seriously off the mark and those making those assessments are still living in 2005.  Compared to another candidate with business experience in the mix, I would take Fiorina over Trump any day.  At least she took a risk that did not pay immediate dividends, but one that did not result in a trip to US Bankruptcy Court in Camden, New Jersey…four times.  Trump may not have declared bankruptcy himself personally, but on at least one occasion the Donald himself sat in that bankruptcy court.  His “art of the deal” was to sue Carl Icahn because the word “Trump” on the Taj Mahal casino was “ruining his brand.”  Additionally, she has been very open about her tenure at Hewlett-Packard without bravado and lest we forget, not everything Trump touches turns to gold (more likely, it is red neon) and not every law enacted or position taken by the politicians in this race are all golden.

Before Trump “had the sense to get out of Atlantic City,” in his words, Trump’s properties were a joke.  Many were in disrepair (the period when it wasn’t a question of “brands”).  When he sold Trump Marina to Landry’s Inc. and they renamed it Golden Nugget, he left them with a huge electric bill unpaid.  Regardless, a real businessman, Tillman Fertitti, has completely turned that property around and it is now profitable.  Trump didn’t extricate himself from Atlantic City; he was laughed out of the city.  Incidentally, the Taj Mahal remains a garish eyesore.  For an explanation of Trump and bankruptcy, see the following article: http://www.forbes.com/sites/debtwire/2015/08/18/a-trip-down-donald-trumps-bankruptcy-memory-lane/2/

As for the criticisms of her conservative credentials, she is certainly not as far right as some other candidates, but we all can’t have Cruz for a last name, can we?  If we went solely by past stances, then Bush and Graham would be considered more conservative than Fiorina, yet we know that not to be the case.  And endorsements (none yet) from groups that some people distrust mean essentially squat.  This writer is willing to give Fiorina the benefit of the doubt more than I am willing to give other born-again-conservatives like Kasich and Trump the benefit of the doubt.

And the reason stems from the third criticism- her run against Boxer in 2010 in a losing cause.  In that campaign, Boxer was particularly vehement in her depictions of Fiorina as a far-right pro-life candidate.  In the Senate debate, this was a serious exchange between the two, yet Fiorina stuck to her argument that Roe vs. Wade should be overturned.  She was a supporter of Proposition 8 banning gay marriage in California, supported the death penalty, and received an A-Q rating from the NRA.  On fiscal issues, she opposed the Obama stimulus, cap-and-trade, Obamacare, and amnesty and sanctuary cities.  All of these are well-documented positions taken during her campaign against Boxer.  In California, they are also a recipe for sure defeat.  But, she did not back down.  As a result, she lost by 100,000 votes of over 9.4 million cast- a relatively close election…for California.  It was also the the closest any Republican got to Boxer as her previous win margins averaged over 1 million votes.

Carly Fiorina is not my first or even second choice in 2016.  But, piling on her from the Right is doing the heavy lifting for the Democratic Party.  In that second debate, she was perhaps the most specific in terms of policy proposals and addressed them without the aid of cue cards or notes.  It behooves everyone to pay attention to her in 2016, not the Carly Fiorina of 2005 or 2009.  If the Trumpettes are willing to give the Donald a pass for his sudden evolution on the issues when his past has more egregious shortfalls, then they should be willing to do the same for Fiorina.  In the meantime, instead of criticizing, perhaps we should sit back and enjoy the ride because she is the one candidate who seems to realize who the real enemy is at this point- Hillary Clinton.