Why I Won't Worry About Chris Dodd This Week 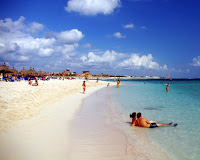 That picture is where I will be for most of the next week. I will be without a computer, so posting will be light, sporadic or non-existent. Hopefully I don’t miss too much, though Simmons may make an announcement before I am back on-line. In any event, soon after I return I plan to transition from  [Blogger] to a more attractive and easier to use WordPress site; hopefully that excitement will be enough to get you to come back. I will have limited email access on my phone, so somebody email me if anything good happens. I’ll try to read them between Coronas.

One last installment of Off the Wire before I go.

– The Minority Report on Barney Frank’s desire for criminal prosecutions of those responsible for the banking crisis – except, of course, for himself, his boyfriend, Chris Dodd, etc.

– New York Magazine, Right Soup and Osmoothie on Dodd’s plan to increase the FDIC borrowing limit some seventeen times it’s current level. Because, you know, we have a bunch of money lying around and we didn’t know what to do with it.

– Ironman with a flashback to Dodd on failing banks.

– Brainflation with an interesting point regarding the constitutionality of Ted Kennedy receiving honorary knighthood, and Chris Dodd’s response. I don’t imagine that that this is going to turn into a scandal, but my guess is Dodd hadn’t thought about it before laughing off the claim. That is how many politicians these days view the Constitution (see the recent blatantly unconstitutional DC voting rights bill that passed in the Senate with Dodd’s support).

Cross-posted (with minor modification] at The Artful Doddger.

Greg Gutfeld Savages Libs Who Took His Joke from 'The Five' Way Too Hard
Townhall
'All theater. 100% of it': President Biden -- who is sick -- is reportedly out for dinner without a mask
Twitchy
With 'Yes' Votes on a Federal Vaccine Database, 80 Republicans Want to Seal Your Fate—Seal Theirs and Vote Them Out
Redstate
Twitter Censors American Heart Association Article on mRNA Vaccines and Cardiac Health
PJ Media