The Congressional Budgetary Office has just released its review of the President’s budget proposal: A New Era of Responsibility. The CBO numbers show us sinking faster, at the hands of Obama’s fiscal death squad, than we first thought.

Tapping into my inner Ross Perot, and my love of charts, here are some of the CBO’s latest estimates. 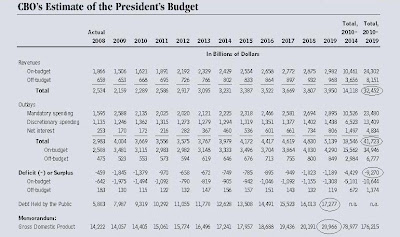 Here is a graphical representation of what is being projected. 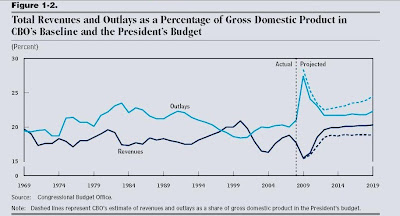 The most telling feature of this is the incredible increase in spending while suffering a severe depreciation in revenue the government will be taking in. As time goes on the estimated gap continues to widen which explains the sharp up turn in publicly held debt as a percentage of GDP.

From the CBO Director’s blog,

In a nut shell, the President is making good on his promise of keeping taxes low for those making under $250 thousand a year. Although, while doing this he is engaging in absurd spending that does not correspond with the amount of revenue being taken in. Since the main source of government income is tax payrolls, which are being decreased while expenditures are increasing, heavier taxation of all wage earning quintiles will be required at some point in order to make up for revenue deficits.

Fear not though. The President is engaging in high level talks-with our brightest minds-discussing the contentious problems facing all Americans. Barack Obama Pimps the Bailouts on Jay Leno