Since the stimulus package and the economic recovery being at the forefront of domestic and international affairs many of our other problems seem to be systemic background noise. One of the greater threats becoming apparent is the disturbing situation south of border, in Mexico.

This report is from The Monitor, via ThreatsWatch.

REYNOSA — A violent street battle between suspected gangsters and Mexican soldiers killed at least five people Tuesday morning as separate protests against the military presence shut down parts of the city for several hours. read more…

Why should you care about the interior workings of Mexico? Here is the location of Reynosa in proximity to the United States. 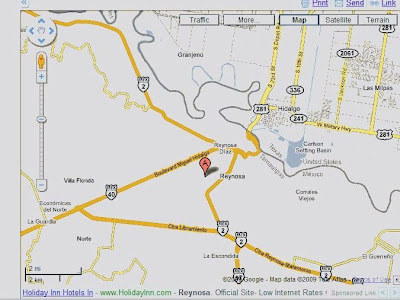 According to the Monitor, there were spillover worries among federal and local authorities.

The Monitor-On the U.S. side, federal and local authorities flooded the international crossings with heavily armed officers, fearing a spillover of the violence.

In recent years, Mexico’s narco-culture has become a growing and dangerous problem. Since Columbia gained a degree of control over the drug cartels’ influence within the country and with better enforcement in the Caribbean, the once stagnated Mexican drug routes have turned into the most efficient way to traffic illegal narcotics from Latin America into the US.

This has in-turn, sparked fierce competition among Mexican drug gangs in areas such as, Acapulco, Monterrey, Tijuana, Juárez, Nogales, and Sinaloa. Violence has been on the rise as turf battles and power grabs erupt.

After Mexican President Felipe Calderón took office, ties between the Mexican government and US were strengthened somewhat. The Bush administration signed the Merida Initiative into law, “A three-year, $1.5 billion anti-drug assistance package for Mexico and Central America.”

However, many of the problems facing the Mexican authorities are actually being influenced by activities within the United States. From the Woodrow Wilson International Center for Scholars.

From the Heritage Foundation,

Although the noise being generated by this growing and persistent problem has reached the ears of the Department of Homeland Security. From a recent DHS press release.

DHS–Southbound Gun Smuggling–A growing wave of criminal violence in Mexico’s border communities and in the interior of the country, fueled by the availability of guns and currency smuggled south from the U.S. poses a serious threat to Mexico’s security and portends deepening problems for our nation’s border regions.

Much of the success to secure Mexico relies on their own internal responsibility and accountability, the US shares a sizable load also. Only until recently, did America start maintaining a strengthened presence on the 2,000 mile border we share with Mexico. While securing the border is a great start, there is far more that needs to be done. We have to clean up our own house by cutting cut off the pipeline of weapons and cash flowing into Mexico. This means aggressive law enforcement against the gangs and people whom are dealing in these illicit trades with the Mexican drug cartels while continuing to partner with the elements of the Mexican government that are still legitimate.