Ever get the feeling you are about to get mugged? Have you ever come home to find your home has been ransacked by criminal thugs who have just turned your life upside down? Well, if you don’t feel it now, when comes time to pay for the stimulus package, you might.

The state of California, according to the all seeing all knowing Wiki, boasts the eighth largest economy as far as GDP, eleventh as far as purchasing power parity, and is responsible for thirteen percent of the national GDP of the United States. Pretty impressive.

Now for the bad news, as reported by the LA Times, Cali is facing a projected $41 billion budget deficit by the middle of next year. Lawmakers and Governor Arnold “Arnie” Schwarzenegger are feverishly attempting to come to a compromise on how to settle their budgetary shortfalls. Their solutions; $14.4.billion in tax increases,$15.1 billion in program cuts, and $11.4 billion in borrowing.

Here is a more acute breakdown from the Tax Foundation, 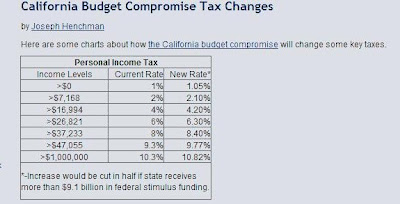 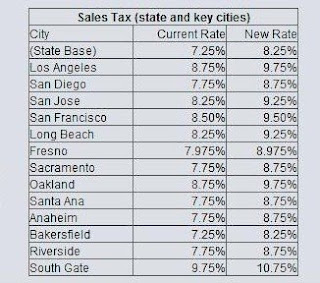 Why look at Cali? Because, California, is the looking glass for future outcomes for the rest of the country, politically and economically. Looking at their solutions might just give some insight as to what to expect from our government and for the country over the next few years .

Now, when it comes time to pay up for the stimulus, what do you think our almost broke country is going to have to do? Raise taxes, cut spending, borrow, or spend more, much like California. Here is the cost per family and per person for just this stimulus, forget the original Bush stimulus ($168 billion), TARP I ($700 billion), Geithner’s proposed TARP II ($1 trillion to $2 trillion), and the national debt, pre-stimulus rich environment (Sept.2007 est.-$9,007,653,372,262.48). 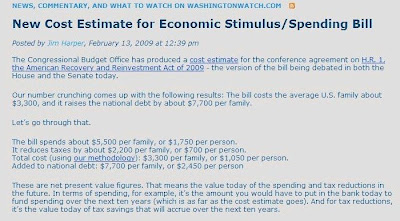 However, this is per American; every man, woman, and child, all 303,824,640 (July 2008 est.) of us. Though, this is not necessarily the people who are going to be paying it back, enter working Americans. The labor force estimates in the US, as of 2008, are at 155.2 million, roughly half of the population. That just about doubles the tax burden, generated by the stimulus, on working Americans who will be required to pay this garbage back. Or, $4,696.20 per American worker, using WashingtonWatch.com’s numbers. Feel like you’re getting mugged yet?