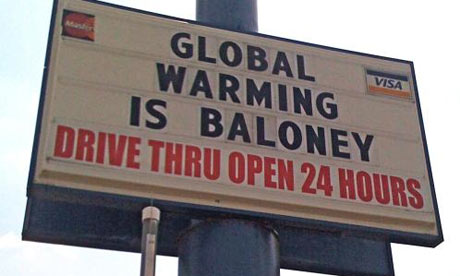 The franchisee, Mirabile Investment Corporation (MIC), has been contacted by Burger King’s corporate offices, but is refusing to take the signs down.

J.J. McNelis, MIC’s marketing president. had this to say to an eco-lunatic / “reporter”:

Reporter: BK Corp issued a statement saying that ‘global warming is baloney’ wasn’t their view and that they had asked you to take them down. Is that your understanding of it?

McNelis: I can’t speak for them. I would think they would run from any form of controversy kinda like cockroaches when the lights get turned on. I’m not aware of any direction that they gave the franchisee and I don’t think they have the authority to do it. The franchisee can put on a sign whatever he wants.

Reporter: They’re saying that within the terms of the franchisee contract it says something along the lines that signs outside a restaurant can’t be used to express any political or religious views.

McNelis: Well, it maybe a religious belief for some folks, but it’s certainly not for the franchisee here and I don’t think that it’s necessarily political either. But I have to tell you that I don’t read the franchise agreement with regularity or else I would have a bad case of insomnia.

Reporter: BK Corp are saying that they’ve demanded that these signs get taken down and that they have now been taken down…

McNelis: Burger King can tell me to use my left hand when I scratch my nose instead of my right but that doesn’t mean I’m going to use my right. They can say whatever they want. The management team can put the message up there if they want to. It is private property and over here in the US we do have some rights, not withstanding a franchise agreement that I could load a Brinks vehicle with I’ve got so many of them. By the time the BK lawyers work out how to make that stick we’d be in the year 2020. I don’t think the franchisees are particularly concerned about that. BK can bluster all they want about what they can tell the franchisee to do but we have free speech rights in this country so I don’t think there’s any concerns. Don’t come away from this conversation with the impression that the franchisee did anything because the BK Corporation told him he had to. They’re only printed words on paper. The contract is only as strong as the ability to enforce it. Some things can be enforced, other things can’t. I know BK would like to have you believe they have the authority and the willingness to make us do all kinds of different things, but that’s not how the world works.

We have some free speech rights in this country Mr. McNeils, for now.  However, the fifth column is firmly in charge.  Don’t be surprised if that “changes” soon.

Read the full story and conversation with J.J. McNeils here.