“There is no problem that surgery cannot make worse.”

We will restore science
to its rightful place…

The most casual witness to Mr. Obama’s first words as president should have immediately understood what was meant: Mr. Obama was uttering a great boast. He and his many “fellow citizens” would lift science from the dustbin where it had been tossed by the preceding presidency. Mr. Obama implied he was not a small-minded Luddite smashing the machinery of science; George W. Bush was the very emblem of intellectual torpor, whereas Mr. Obama is enlightened, progressive. He and his followers will restore science’s boldest claims:

We will restore science
to its rightful place,
and wield technology’s
wonders
to raise health care’s quality
and lower its cost.

America will turn its hopes to the competency of men and women devoted to the deepest inquiries into existence, matter, nature, energy; the human body. America the Great, consisting of the most expansive and excellent minds united to Mr. Obama’s new vision, will reject the intellectual indifference of the past, an indifference born of the the fear of change. America will reject those who deny the consensus of scientists that man-made global warming is real. America will reject the refusal to use human embryos for the harvesting of stem-cells, cells that hold so much promise for the infirm. Science has been forsaken for far too long. The time has come to restore science to its rightful place.

It is a bold boast. It is nearly a believable one. But boldness does not make it true: saying that science shall be restored falls rather flat when considering the source of so great a claim. In fact, hearing the leader of the Democratic Party speak of science in such glowing terms is nearly risible. It is hard not to laugh simply because the Democratic Party, particularly its most liberal members, hate science. They always have.

What do the following things have in common:

It is perfectly clear what all of these have in common: they are the fruits of science. Not bad science. Not rogue science, but science in its purest form, even its most beneficent form: Good things were offered, bad things followed. Each good thing was offered as proof of science’s interest in helping; each was offered as a solution to a problem. Who could have predicted that the solutions would cause new problems?Surely Mr. Obama could not be talking about restoring science to the levels we’ve known in the past, right? Surely he does not mean restoring science to the place where it kills, poisons and maims humanity, and ruins the earth’s environment. Surely he is not suggesting that all those without access to healthcare have nothing but an unalloyed desire to see doctors at any cost, the very doctors who have killed, maimed and wounded so many. (Where is a person most likely to contract a necrotizing, flesh-eating bacteria? That’s right. In a hospital.) He could not be asking us to believe that “technology’s wonders” are particularly wonderful, could he?No. He could not be.

HOW, AND WHY, LIBERALISM HATES SCIENCE

Barack Obama said yesterday that his administration would not be one that would “deny facts.” (This will be explored more fully in a separate column.) Without making any great leaps of faith, it can be concluded that Mr. Obama is contrasting himself — again and enduringly — with his predecessor. But the question is what Mr. Obama means by facts. Does he mean by facts the sort of facts used by the World Wildlife Foundation in its “Save the Polar Bear” campaign, facts like 40%-50% of all polar bears MIGHT vanish by 2050, or that polar bears COULD be extinct by 2100? Does he mean by facts that humans MUST change their ways or the world MIGHT be irreversibly damaged by profound and unmitigated warming? Does Mr. Obama believe that propositions built around such conditionals as “MIGHT” and “COULD” and “MAY” and “PROBABLY” are facts? Does Mr. Obama believe such non causa pro causa fallacies endemic to global warming “science” are the sort of “facts” that should rule the Oval Office? Apparently he does.

Liberals hate science for a whole host of reasons. The most important reason is that science stands in the way of one of liberalism’s most precious beliefs: that all humans are created equal. Egalitarianism is arguably liberalism’s principal tenet; it is its chief cornerstone. Ironically it is a religious and not a scientific conviction: there is actually nothing scientific about it at all (nor is there anything Judeo-Christian about it, either). It is a perfectly humanistic belief, based solely in faith. It apparently does not matter to liberals that Darwin himself would laugh at its naïveté and senselessness. Evolution is unarguably all about inequalities; if all human forbears had coursed through time as equals, the genus, and not just the species, would have been extinct long ago. Inequalities are the very engine of evolution. “Survival of the fittest” and “natural selection” are about one speciatic characteristic having an advantage over another. Progress, if we can call it that, is founded on inequalities. The human species has advanced simply by competition, with the spoils going to the advantaged.

Hence, liberalism hates science. The simplicity of science in animal breeding proves the case of evolution; not all dogs, or horses, or chimpanzees, are equal. But this simplicity is despised by liberalism, as it stands in the way of its political paradigm. Equality under law is one thing, and it is hard to dispute. But equality of beginnings and ends; to promise equality at the start and the finish, at the beginning of a game and its end, is the religious, almost manic, goal of liberalism. Supervising, so to speak, social outcomes is invasive and contra-scientific. But not only is “just trying” sufficient to earn liberalism’s stamp of equality, just “being” is sufficient. The losers get the winnings, even if the winnings were rightfully earned by the winners. To liberals, everyone gets a medal; everyone gets an A; everyone is above average.

But there is an Orwellian aspect to all of this: All men may be created equal, but in liberalism, there are some who are more equal than others. If a liberal accepts Darwin’s theory of natural selection, that there are profound differences between not only the species but even within the human species, he does so assuming that some privileged members of the human species are sufficiently advanced to direct the evolution of the rest who are not as privileged. The “elite” know what is best, not simply politically, but in evolutionary terms: the phalanx of liberal psychotherapists are here to shape and mold, serving as facilitators of “real change,” moving all toward a better humanity. However, this class of facilitators is not equal to those they facilitate; but the whole edifice falls at elitists’ feet if they permit themselves one moment of honest reflection.

How else do liberals hate science? They hate it when it does not speak to their deepest prejudices: gay marriage advocates continue to declare that science has shown a genetic cause of homosexuality, even when science has shown no such thing (more on this tomorrow, by the way, in a devastating argument). The science of the gay gene is not only problematic and presumptuous. (Are all things genetically caused desirable and acceptable, and who decides? Are there irresistible, immutable genetic influences on gay behaviors, or do gay behaviors affect the genetic code?) The science of the gay gene is not scientific. It is really wishful political and religious thinking. It seeks to find a genetic cause of a sexual aberration, solely to say the aberration is equal to the norm: Two gay men living in “committed, loving relationship” is equal to a man and woman married, raising children.

Liberals hate the science associated with global warming. They tout consensus; they praise it as if it is incontrovertible proof. But they ignore the facts; they ignore the fallacy (consensus gentium) — the irrationality — of the idea of submitting to pop-opinion. Who cares that the mass of scientists who sign on as members of the “consensus” possess expertise in areas irrelevant to atmospheric science? When an electrical engineer, or a radiologist or histologist, signs on to the theory that human influence on TEMPERATURE trumps even the sun — that humans can influence temperature beyond “repair” — attentive folks note that liberals disregard the glaring fact that the consensus is rigged by experts ignorant of the facts. The political leverage and convenience gained by liberals who ascribe to global warming “science” is all about control of society and manufacturing, and the redistribution of wealth. Global warming scenarios justify political seizure of industry, profits, assets, all for the “safety of the planet.” Any real science that might undermine the liberal premise, or at least give a liberal pause, is anathema.

Liberals hate the science of what is considered straight sexuality; traditional monogamy’s health and social benefits are well-known, but liberals dismiss such as puritanical and simple-minded.†† Liberals hate the science of conception; the obvious beginning of human life is conception — science and reason show us this — but (many) liberals choose ambiguity about the genesis of life, solely to placate consciences weighed down by the guilt and shame (imposed by no one but conscience) of abortion known by women (and men) who sought comfort in the life-denying tools used by science to evacuate the unwanted from countless wombs. Liberals also disregard the science about the grief, despair and alienation that follow such “private” choices.

So there is something ironic when Barack Obama declares that he will restore science to its rightful place. At best, this means that Barack Obama will use science selectively, finding just those facts that work, that our convenient. Forget that technology’s wonders have unleashed countless nightmares on the planet, many of which were unleashed to chase other nightmares away. Barack Obama will restore science to its rightful, toxic, brutal place.

In other words, science will be used the same way under the new boss as it was used, allegedly, under the old boss. Cynically, manipulatively. Conveniently.

Just look at how smart these people are: 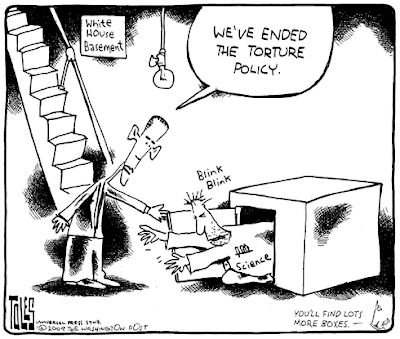 †The Industrial Revolution is added here because it’s generally considered the transition to a more toxic era of human behavior. It may have been unavoidable; it quite clearly proved to be a very beneficial transition in many ways. But it is the beginning, in one sense, of humanity emitting “global warming gases” into the atmosphere.
††Not every liberal thinks this way, of course, but by and large liberalism shows a much greater acceptance of pre-marital sexuality — and other variant forms — than does conservatism. As for guilt, there are many in the sciences, particularly the social sciences (e.g., psychology), who believe guilt is unhealthy.