John Wayne Gacy was a Chicago Machine Democrat. Oh, and so is Barack Obama 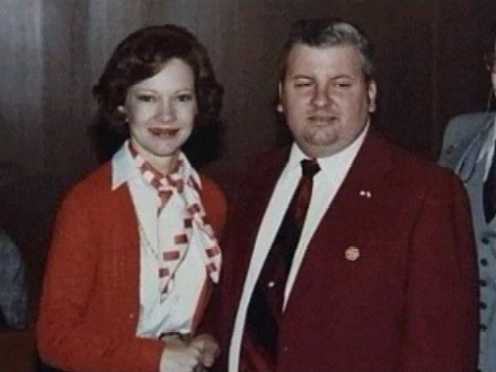 John Wayne Gacy was one of the most foul, ghastly, human monsters to ever slither across this earthly firmament. The depths of his rotted, fetid soul was an infinite cesspool of the most repugnant man-scented nightmares. He was the absolute embodiment of undiluted Evil. The hand seen shaking Roslyn Carter’s  is the same hand that snuffed the life out of some 4o young men for no other reason than an attempt to slake an unquenchable thirst of warped and twisted homicidal, homosexual appetites.

How did a hideous monster get so close to the First Lady of the United States? Barack Obama is also a Chicago Machine Democrat. Thus, I posit Barack Obama might be a closeted homosexual serial killer.

You know:  Guilt by association. I mean, look at the pictures. Pictures don’t lie… do they..?

Certainly, both John Wayne Gacy and Barack Obama have shaken Rosalyn Carter’s hand. “One hand washes another”, or some such. If that doesn’t prove something, I don’t know what does.

Well, pardon me: this outrageous postulation makes about as much sense as the one swirling around that “whites”  like me  had anything to do with the shooting death of a black man in Ferguson, Missouri –because I’m “white”.

Yes, I’m white. White, white, white. Yawn. At least I’m white on the 2014 color-wheel. Back in 1911, though, when my Grandparents landed at Ellis Island, they were Jewish– which was, at the time, about as “White” as Little Black Sambo. The Deed Restrictions to the home they eventually purchased in Lansing, Michigan originally had covenants against “Rendering Lard or Soap, or selling to Jews”.

Culturally speaking, the same (alleged) hatreds applied to my Grandparents as they do to Michael Brown’s.

I am fed up with being called responsible for crap like that which is occurring in Ferguson, Missouri because of some back-handed, obtuse references to the color of my skin, without even a passing nonce to who I am.

With all due respect to race-hustlers such as the absolutely loathsome Messrs Eric Holder and Al Sharpton, John Lewis and Michael Eric Dyson, I have no need to look in a mirror, or search my soul, and any other such poetic rot.

In fact, I’ve seen a rise in anti-Jewish hatred in America that members of the 1930’s Klan would embrace. But, the sight of (amateurishly backward) swastikas painted on the porticoes of American synagogues hasn’t caused me to run out an torch the local Sak-N-Pak.

And, that’s the point: I won’t indulge –along with the mob–  in some dime-store Guilt by Association, and call Barack Obama a possible homosexual serial killer because he belongs to the same political machine as another homosexual serial killer. Just because I have the same skin-color as some police officer in Missouri doesn’t mean I am a racist, for God’s sake, as Eric Holder suggests.

Such sentiments are broad-brush poison. I reject it, and him.