Brock Lesnar Bashes Obamacare!! " I am a conservative Republican" Who doesn't want it! 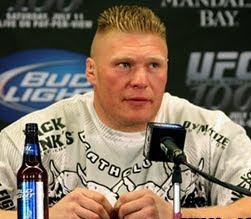 Brock Lesnar gave a press conference regarding his absence from the UFC octagon, due his very serious intestinal condition. He said years of a high protein diet had caused his slowly progressing illness, but assured he fight world that he would be back fighting this summer.

But as a side note and much to my delight, it turns out that Broke is somewhat a political hack! He surprised more than just me when he started lambasting the White House and heath the care reform bill.

“Probably the low point was getting health care from Canada,” Lesnar said. “Not to get into the political side of things, but our health-care system is a little radical, but we’ve got the best doctors, I believe, in the world here (in the U.S.). Our system does need some restructuring, but I don’t believe a total reform is the answer.

“The only reason I’m mentioning this is – I’m mentioning this to the United States of America, because President Obama is pushing this health-care reform, and obviously I don’t want it. I’m a conservative Republican. … I’m speaking on behalf of Americans. I’m speaking on behalf of our doctors in the U.S. that don’t want this to happen, and neither do I.”

I can’t help but wonder how many new fans he made when he came out bashing Obama and his health care disaster. I know I am one now! Go Brock, and who the hell is Fedor?