Nobody Messes With Joe Biden (Except Iran & Muslim Terrorists) 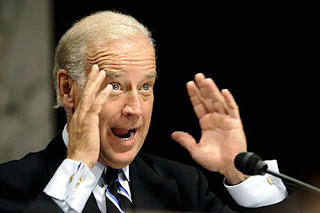 The Vice President of the United States was allowed in public yesterday. His face frozen by multiple injections of Botox, his eyes rapidly blinking like one just released from a darkened room and into the light after months of seclusion, and his scalp covered with freshly planted artificial hair, Mr. Biden is the living embodiment of dishonesty and falsehood.

His interview on Meet The Press was no different.

Attempting to refute the claims of former Vice President Dick Cheney by making up lies, plagiarizing others’ successes and weaving together a tapestry of tall tales that even toddlers wouldn’t deem credible, Mr. Biden reiterated exactly why he isn’t allowed in public much.

Even for a man with a striking lack of coherence and freed from the constraints of reality in his rhetoric flourishes, the task at hand was huge. How does one in a single interview claim that Iraq “wasn’t worth the price” and yet take credit for the successful conclusion of the war via a war surge strategy that both Mr. Biden and Mr. Obama voted against in the senate?

Apparently, however, for the man that claims paying higher taxes is patriotic and holds “transparency meetings” behind closed doors, anything is possible.

The hapless statesman who once suggested that the international community carve up Iraq into three parts based on ethnicity, proved to be nearly Obama’s match for self-promoting hubris. Mr. Biden acted shocked that former Vice President Cheney would dare suggest that President Obama didn’t think there was a war anymore. Citing Obama’s sole reference to the “overseas contingency plans” as actually being a war again in his State of the Union, Biden attempted to re-write and thus negate the entire first Nobel Peace Prize winning year of the Obama presidency.

Then he did it. Vice President Biden actually took credit for President Bush’s hard-fought successes. Successes that the vice president fought hard against.

Still, credit is due to the Obama Administration. A huge re-writing of history is necessary, and who better to do that than a Washington blowhard who never did care much for facts or reality.

The reality is that Mr. Biden and Mr. Obama voted against President Bush’s surge plan for Iraq.

In fact, Mr. Biden is on record in the Boston Globe during the summer of 2007 as saying “The surge isn’t going to work either tactically or strategically. Tactically it isn’t going to work because … our guys go in and secure a neighborhood, but because we don’t have enough troops, we have to turn it over to the Iraqis, and they can’t hold it or won’t hold it.”

In the spring of 2008, Mr. Biden reiterated his concerns saying that “I believe the president has no strategy for success in Iraq. His plan is to muddle through, and hand the problem off to his successor.” On the “failure” of the surge itself, he argued that “Violence has come down, but the Iraqis have not come together. There is little evidence the Iraqis will settle their differences peacefully any time soon.”

His boss, the esteemed military expert, Barack Obama declared the following about the surge in July 2008, “So far, I think we have not seen the kind of political reconciliation that’s going to bring about long-term stability in Iraq.”

Now, Mr. Biden has the audacity to claim that the successful conclusion of the war in Iraq will be “one of President Obama’s greatest achievements.”

Of course, by “achievement” he means something that was in place thanks to President Bush and a policy which the Obama administration has not changed. Apparently only the bad things that happen during Obama’s administration are President Bush’s fault. Good things accomplished by Bush before leaving office fall under the category of “Obama’s successes.” Even the actual withdrawal of troops from Iraq is being completed on a time table established by the Bush Administration. In short, besides a lot of hot air, anti-American drivel, and a healthy dose of pessimism, Obama and Biden have nothing to do with the success in Iraq.

Former Vice President Dick Cheney was also a little surprised to hear Biden’s self-aggrandizing over Iraq: “Well, I — I guess I shouldn’t be surprised by my friend, Joe Biden. I’m glad he now believes Iraq is a success. Of course, Obama and Biden campaigned from one end of the country to the other for two years criticizing our Iraq policy. They opposed the surge that was absolutely crucial to our getting to the point we’re at now with respect to Iraq. And for them to try to take credit for what’s happened in Iraq strikes me as a little strange.”

Of course, this is the man who claimed to regularly visit a restaurant in Delaware that’s been closed for 20 years. Reality waved good-bye to him decades ago.

In the almost the same breath, the Vice President went from patting himself on the back to claiming that the war in Iraq was “not worth the price.”

Now, one expects an anti-American radical like the intellectually bankrupt and slovenly propagandist Michael Moore to make such comments. The sitting Vice President of the United States however, should never publicly demean the mission our soldiers are currently fighting–and dying for. Privately, he can stew all he wants about the injustices of liberating millions of people from a brutal regime that used biological weapons on its people, committed mass acts of genocide and the brutal torture of women. Publicly, however, he should just shut his trap.

In Biden’s world, not only is Iraq a dazzling success of the Obama Administration, but Iran is not “an immediate threat,” despite near daily warnings of working towards a nuclear arsenal and grand designs to deliver a “striking blow” to either the West (i.e. America) or Israel.

Just because they openly talk of wiping us off the map via nuclear weapons doesn’t mean it is a concern according to Biden’s way of thinking. His larger concern is that if Iran “continues on the path of nuclear weapons” then “you know the Middle East…Saudi Arabia, Egypt, Turkey, etc. would be under pressure to acquire nuclear weapons.”

So a nuclear Iran with all of its anti-semitic and anti-American threats of violence via nuclear weaponry is not a threat, but a nuclear Turkey or Egypt, well that’s cause for concern.

On this Biden has been consistent. In the fall of 2009 he told CNN that he was unfazed by Iran’s plans for worldwide Jihad, “I am less concerned — much less concerned — about the Iranian potential. They have no potential at this moment, they have no capacity to launch a missile at the United States of America.”

So delusional is Biden that he even thinks that America’s debt-holding overlords, the Chinese, will eventually come around and be on our side regarding Iran. Sure, Joe, sure they will. We have such a bargaining chip to tell them what to do at this point.

Don’t worry though, he also assures us that the chances of another massive terrorist attack (or pesky manmade disasters) on the United States is unlikely. Of course, in his world the Fort Hood Jihadist was acting alone and just experiencing a bad day completely separate from Muslim extremism while the Christmas Day underpants bomber similarly was just a crazy lone wolf stopped by a perfectly working system. You’ll forgive us for not taking your word on it Joe.

We are often told that “nobody messes” with America’s court jester, Joe Biden. Americans better hope so. Mr. Biden and his administration are not taking the threat from Iran or Muslim extremism seriously. From show-trials of enemy combatants to willfully ignoring the growing Iranian threat pursuant to his own faux peace ideology, (also known as the Carter doctrine of “peace through weakness”) this administration is making our national security every bit as ludicrous as Biden’s incoherent gaffe-laden fantasy world. And while Joe’s tall tales are always good for a laugh, when our lives are on the line, it isn’t funny.