Founding Father Caesar Rodney: Who He Was and Why He Matters Today 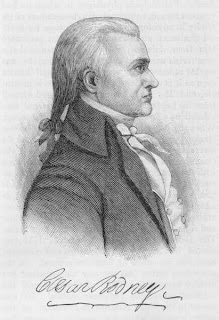 America’s ruling class in 2010 bears a closer resemblance to the oppressive British rule which she broke free from during her founding than her founders. Life, liberty and the pursuit of happiness are no longer “inalienable” and “endowed by our Creator.” An air of self-importance and superiority has so marinated our elected officials that they seem infected with the madness of King George, rather than the laudable liberty-soaked intellect of Jefferson.

Instead, today’s leaders go to great lengths to to conceal the real impact of policies on the economic health and individual liberty of their constituents even while no pretense is made about the same leaders’ personal disdain for those same constituents. Any American lucky enough to attend a town hall meeting this summer can attest to that fact.

Leaders of both parties have, at best, lost the fire in the belly to defend America’s free market system of individual liberty and economic opportunity for all; and, at worst, openly declared war on that same system in hopes of perfecting a Communist utopia where the “city on a hill” once stood.

Caesar Rodney was one of those patriots.

Missing from many history classes in today’s schools, Rodney is indeed a much needed hero for a generation dangerously close to handing freedom over to the clutches of government.

Such was the case in 1775-1776 during the American Revolution. Not all the folks in America were interested in independence and “liberty and justice for all.” Many colonists favored reconciliation with the crown, and did not seek any break with the monarchy.

General George Washington and the John Adams and Thomas Jefferson led Continental Congress understood this and did what they could to lay out cogent arguments for the case for independence while trying to fight off the vastly better equipped British army.

While Mr. Washington led America in war, and the Continental Congress prepared to birth America’s Declaration of Independence, the good Mr. Rodney served in both capacities. Caesar Rodney was a delegate from Delaware to both the Stamp Act Congress and later to the Continental Congress. Mr. Rodney was also a military leader for the colonial militia, having begun his military career in the French and Indian War. After Lexington and Concord and the “shot heard around the world” Mr. Rodney remarked that, “Now one was neither Tory nor Whig; it was either dependence or independence.”

“The readiness with which you took to the field at the period most critical to our affairs, the industry you used in bringing out the militia of the Delaware State and the alertness observed by you in forwarding on the troops from Trenton, reflect the highest honor on your character and place your attachment to the cause in a most distinguished point of view.”

Despite his wartime heroism however, it is in the legislative capacity that Caesar Rodney’s most heroic accomplishment can be found.

At home, Mr. Rodney helped lead the Delaware Assembly in voting on June 15, 1776 to sever all ties with Britain. He also took part in the Continental Congress that drafted the Declaration of Independence.

By early July, however, Mr. Rodney had returned home to Delaware to tend to many of his other official duties and to rest. Caesar Rodney suffered from both asthma and a rare form of facial cancer that left him disfigured and in constant discomfort. The cancer slowly ate away at both Caesar’s face and his energy. Referring to his disorder, Caesar called it “that horrid and most obstinate disorder.”

As the final vote came near, the delegates had decided on an all-or-nothing approach to the vote. Every state had to agree to ratify this Declaration of Independence and stand together against British oppression, or together they must sink back into a serf-like dependence.

As the vote neared, Delware’s other two delegates were at a deadlock. Thomas McKean favored independence while George Read found it too radical a move. Thus the Delware delegation was deadlocked and in danger of voiding the entire Declaration. Mr. Jefferson’s eloquent call for a revolution to protect the rights to “life, liberty and the pursuit of happiness” almost went unheeded.

Caesar Rodney could not let that happen. Upon being notified of the situation, Mr. Rodney made a midnight ride from Delaware to Philadelphia that dwarfs even the famous ride of Paul Revere in importance. Mr. Revere’s ride was indeed a call for readiness in the defense of liberty, but it was Mr. Rodney’s ride that quite literally turned the wheel of history and changed the world.

Caesar Rodney’s ride spanned 80 miles during oppressive summer heat, violent summertime thunderstorms and the accompanying torrential rain. It was a ride that would have challenged a man in good health, but to a man in Rodney’s condition, it was almost certain to be fatal.

Through the mud and cobblestone streets, Caesar Rodney somehow made his way alone to Philadelphia. He was racing toward his destiny. A destiny which would make him a marked man in the eyes of the British crown and quite possibly serve as his death sentence (assuming he survived the ride!)

Through a mixture of the hand of Providence and his own indelible passion for liberty, Caesar Rodney made it to the floor and cast the deciding vote for Delaware in favor of Jefferson’s Declaration of Independence. As he casted his vote, it is recorded that he said,”As I believe the voice of my constituents and of all sensible and honest men is in favor of independence, my own judgement concurs with them. I vote for independence.”

Thus, defying the elements and the illness that ravaged his body, Caesar Rodney put his own sacred honor on the line in the defense of liberty. His vote put Delaware in the “yes” column ensuring that the Declaration of Independence would pass and that a new American nation “conceived in liberty” would rise from the ashes of monarchical oppression. The world had its shining city on a hill to serve as a beacon of freedom to the world.

It is Caesar Rodney’s irrepressible spirit of liberty that America needs in its citizens and government officials today. As Thomas Jefferson famously asked, “what country can preserve its liberties if their rulers are not warned from time to time that their people preserve the spirit of resistance?”

A free America requires self-sacrificing patriots like Caesar Rodney willing to pledge their life, their fortune and their sacred honor in defense of liberty. Our history has been enriched with the noble sacrifices by men like Caesar Rodney. It is now our duty to continue that proud legacy by transforming that glorious “spirit of ’76” into the next great American renewal in 2010.
This article was originally posted on my blog and my Examiner.com page.

Here's How That 'Transgender' Weightlifter Fared at the Olympics
Bonchie

Gretchen Whitmer Could Face a Primary Challenge Next Year From a County Sheriff
T.LaDuke

Jackie Speier Thinks Trump is a Cult Leader; Forgets About the Cult of Obama and Bernie
Jennifer Oliver O'Connell

The COVID Death Toll Spike That Never Happened Last Week. This Is Why
Townhall
'I hope [the legal costs] break you': Steve Schmidt threatens to sue a conservative political consultant over John Weaver allegation
Twitchy
Kamala Harris Is Turning Out to Be Joe Biden's Biggest Mistake
Redstate
The Morning Briefing: The Trump 2024 Democrat Destruction Machine Readies for Battle
PJ Media