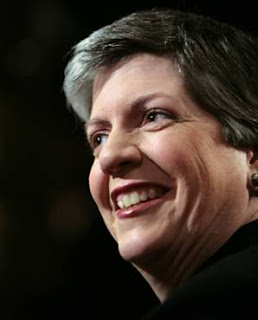 Somewhere in a cave in Pakistan, Osama bin Laden is thanking Allah for Janet Napolitano.

It’s almost as if the United States has selected the befuddled cartoon character Mr. Magoo (and there is a striking physical resemblance between the two) as our Homeland Security Secretary.

For those of you too busy celebrating Christmas to notice, yet another extremist nutbag Muslim has been caught trying to blow us up. In a move sure to be highlighted by President Obama in a future speech as one of Islam’s latest positive contributions to the nation (see his tomfoolery on the Muslim pirates from the time of Thomas Jefferson in his Cairo speech) a Muslim extremist was thwarted while trying to blow up a plane landing in Detroit. This tragedy was averted only by quick-thinking passengers and a rather inept Muslim loon.

Or, as Secretary Napolitano would describe it, “the whole process…went very smoothly.”

Now, in Napolitano and Obama’s world, it is admittedly more important to make Muslims feel special than it is to actually protect Americans from their Jihadic wrath. However, one must have at least a little bit of concern over the Secretary’s complete lack of concern and clear-thinking in this matter of national security. Unless of course, you are an intimate associate of Mr. Obama’s like Reverend Wright, Bill Ayers, Mark Lloyd, Cass Sunstein, Carol Browner or Van Jones, in which case it’s time to break out the bubbly at the thought of the evil “capitalist” America suffering.

Napolitano is probably too busy tracking down the real threat in her mind–radical Christians and pro-life activists. After all, one deranged individual from that group gunned down the saintly church-going late-term abortion doctor (see also conductor of infanticide) Dr. Tiller. Why that one murder alone should override all of the countless acts of terrorism (and thousands murdered) that have happened around the world in the last few decades and almost exclusively (especially in recent years) by the hands of Muslims.

Still, let’s not make any of these fine Muslim Jihadists feel uncomfortable.

Napolitano, with one eye glued to Rick Warren and his dastardly plans for America, was unable to notice the clearly terrorist intentions of Umar Farouk Abdulmutallab, even though his own father had visited an U.S. Embassy to warn our country of his crazed religious ideology and under the suspicion that he was in Yemen attending a terrorist training program.

Yeah, but was he pro-life? Was he a Christian? Because if he’s just a crazed Muslim extremist getting trained in the deadly arts of terrorism 101 in Yemen perhaps even by an offshoot of al Qaeda, well that certainly isn’t grounds to deny him a travel VISA.

Despite the warnings FROM HIS OWN FAMILY, our national security folks, guided by the Obama-inspired wisdom that the “see no Jihad, hear no Jihad” approach to the War on Terror, excuse me, “overseas contingency operations” is best, chose to do nothing.

As a result, a crazed Muslim terrorist gets on a plane bound for Detroit, and as he attempts to blow himself and the other passengers into paradise with the waiting virgins, he is stopped by…a passenger. This had to be the case because this flight didn’t have an air marshal on board. So, thankfully a brave ordinary joe saved the day. In the most sacred obligation our government has (that is keeping us safe) we were left to fend for ourselves.

So a scenario involving ignoring blatant warnings from credible sources about a terrorist, failing to stop said terrorist with chemicals necessary to blow the plane up on his person (and in one report without even a passport) from getting on the plane, and failing to provide the plane with the security necessary to handle a crisis situation like a nutcase trying to blow himself up, is a crystal clear example to the Secretary of Homeland Security of the system working perfectly.

That should make you sleep better at night.

Mr. Obama couldn’t be reached for comment, because he and the family are out in Hawaii partying the year away and “monitoring” the situation from there. And by “monitoring” he means completely ignoring it while importing steak from Japan, dancing the night away to Earth, Wind & Fire and reading GQ magazines about himself. It’s only national security. That’s never been one of Mr. Obama’s pet projects.

It gets better though.

In addition to her absurd proclamation of success in this situation, Secretary Napolitano also lectured that there is no “indication of a larger terror plot.” There were the warnings by his family, the report that he attended a terrorist training camp in Yemen, the reports that he is allegedly connected to al Qaeda for starters. None of these, however, connect him to the real threats in Napolitano’s mind. There is no smoking gun linking him to any pro-life or Christian organizations just yet. Until such time, the stoic Secretary Napolitano will be unmoved in her position.

Of course, Napolitano’s assessment is counter to that of the suspect. Investigators have found that his bomb-making materials were “sewn into his underwear” by “al Qaeda leaders in Yemen.” The suspect himself has “provided detailed information” on his being recruited and trained by al Qaeda for a Christmas day suicide attack.

So, after witnessing Janet Napolitano’s idea of “security” unfold on the national stage, it has become abundantly clear that this administration is staffed with unserious people charge with very serious jobs and our nation is in a much more vulnerable state because of it. The Obama/Napolitano “See no Jihad, hear no Jihad” policy may make Muslim extremists feel better about themselves but it is playing political games with the lives of American citizens.

It is time to put pressure on Washington to commit seriously to the issue of national security. Our nation deserves better security than that which buffoons like Napolitano can offer.

In the Final Stretch for Virginia, Youngkin and McAuliffe Are Tied
Joe Cunningham