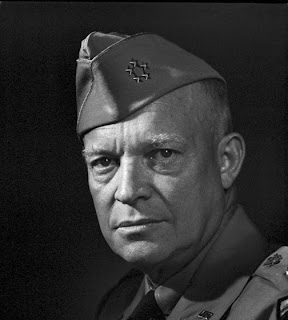 In light of President Obama’s recent “present vote” on the war in Afghanistan, where he incoherently announced a plan both for a troop surge and for retreat, it is always good to reflect back on past leaders.

I was drawn to the words of WWII General Dwight D. Eisenhower. In preparing for the D-Day invasion of France, General Eisenhower (a future U.S. President) wrote this prayer for the army that he so valiantly led:

“Almighty God: Our sons, pride of our nation, this day have set upon a mighty endeavor, a struggle to preserve our Republic, our religion, and our civilization, and to set free a suffering humanity.

Lead them straight and true; give strength to their arms, stoutness to their hearts, steadfastness in their faith.

They will need Thy blessings. Their road will be long and hard. For the enemy is strong. He may hurl back our forces. Success may not come with rushing speed, but we shall return again and again; and we know that by Thy grace, and by the righteousness of our cause, our sons will triumph.

They will be sore tried, by night and by day, without rest–until the victory is won. The darkness will be rent by noise and flame. Men’s souls will be shaken with the violences of war.

Some will never return. Embrace these, Father, and receive them, They heroic servants, into Thy kingdom.

And for us at home–fathers, mothers, children, wives, sisters, and brothers of brave men overseas–whose thoughts and paryers are ever with them–help us, Almighty God, to rededicate ourselves in renewed faith in Thee in this hour of great sacrifice.”

General Eisenhower’s words greatly contrast with the not-so-bold proclamation of our current dithering commander-in-chief. They represent courage, faith and pride in America that has no place in today’s administration. Unlike Mr. Obama’s pride in America no longer being a Christian nation, and various efforts to declare us, in fact, “one of the largest Muslim nations,” General Eisenhower rightly understood that America needed God’s direction, protection and blessing in order to beat back the evils of Nazi Germany. Like President Lincoln’s concern that we “be on God’s side” as a nation to endure, and the references by President George Washington that, “Of all the dispositions and habits which lead to political prosperity, religion and morality are indispensable supports. It is impossible to rightly govern the world without God and the Bible.”

Additionally, General Eisenhower speaks rededicating “ourselves in renewed faith in Thee” while unapologetically praising our war efforts and praying for the victory that will come at the end of a long road of trials due to the “righteousness of our cause.” His words gave pride to our troops, illuminated their great cause of liberation for millions of folks around the globe, and rightly illustrated the long sacrifice and testing that Americans must endure during wartime. His wisdom speaks volume to Americans today and our armed forces fighting in the same vein to liberate millions of folks while destroying the perpetrators of terrorist violence against Americans and all freedom-loving citizens of the world. It is a lesson our nation and leaders would do well to heed.

It is often said that those who fail to learn the lessons of history are doomed to repeat them. Mr. Obama and his rag-tag administration of anti-American socialists have clearly not done their homework and America is worse off for it.

Biden Has Lost the Middle...But a Lingering Question Remains
Townhall
Man arrested for having a gun at #JusticeForJan6 rally was a federal law enforcement agent
Twitchy
Doocy Leaves Psaki a Stammering Mess When He Grills Her on Vaccination Rules Applying to Illegal Aliens at Border
Redstate
Is the FDA COVID-19 Booster Shot Fiasco the Beginning of the End of 'Faucism'?
PJ Media