Obama Might not run in 2012: Finally, something I can support! 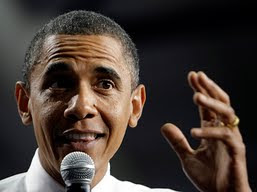 Somewhere, Secretary of State Hillary Clinton is licking her chops. Not so fast, Hillary.

In an interview that few would have foreseen when the Berlin Wall fell, the first black, er, first Asian, president told CNN in China (homeland of his beloved Chairman Mao) that:

“You know, if – if I feel like I’ve made the very best decisions for the American people and three years from now I look at it and, you know, my poll numbers are in the tank and because we’ve gone through these wrenching changes, you know, politically, I’m in a tough spot, I’ll – I’ll feel all right about myself.”

Of course, nobody in their right mind believes that the most narcissistic world leader in our lifetime would ever willingly walk away from power, but it is nice to dream. In fact, many of us question whether our fearless “America’s Top Dictator” Winner would even walk away at the end of a second term, what with all of the covering up of voter fraud in the 2008 election by the Holder Justice Department, and the gaggle of Czars hell-bent on destroying free speech and a free press.

Still, how nice would it be to hear the president announce that he would not seek a second term? Hillary would instantly resign from the State Department and begin working on her campaign, and the nation could breathe a collective sigh of relief that the disciple of Alinsky, Ayers and Wright was leaving the building.

Maybe Sarah Palin? Perhaps the massive throngs of folks greeting her every move on her book tour were enough to frighten the great scripted one?

Sure, she’s unelectable. Even though her overall approval rating in the latest Rasmussen Poll is HIGHER than Obama’s, (51% to 47%) and her appeal among independents now pretty much matches Obama’s (50-49 in favor of Obama.) Perhaps the AP will now assign 11 reporters to debunk Obama’s two books (which many believe were written entirely by Bill Ayers) while placing a photo of Obama in shorts on NEWSWEEK under the title of “what to do about a problem like Obama?” Perhaps they will start telling us how he is irrelevant and can’t get re-elected? Perhaps they will begin assaulting the fact that he has less elected political experience than Palin and no previous executive experience at all? Perhaps they will begin assaulting his education career insofar as his records are completely sealed and his tenure as president of the Harvard Law Review yielded an unprecedented lack of even a single article by Obama, who, by all accounts remained a largely figure-head Law Review president as he was frequently absent and hands-off?

Yeah right. And if they did cover Obama with even one tenth of the venom directed at Palin on an given day, one would imagine that Obama would begin crying hysterically and asking Michelle to take some photo op time out of “her garden” to defend him.

No, America, even if Obama’s chances for re-election in 2012 were severely diminished, in the hands of the lamestream media, that fact will remain hidden from view and most Americans will believe that Obama’s re-election is all but certain.

So again, nobody really believes that the world’s largest ego, who has never met a moment in history that he can’t warp into but a trivial prelude of his arrival in which “few would have foreseen” his glory, would ever walk away willingly from power.

So why say it?

Well, from a political standpoint, it is certainly likely that the most transparent(ly narcissistic) president in our nation’s history is doing a little slight of hand designed to encourage wayward democrats to join him in the socialist destruction of America. Those Democrats who have been whining to the great promoter of death panels and federally funded abortion that their political careers will be over if they vote for this 2,000 page monstrosity.

To that, Obama falsely implies that he just might be willing to sacrifice his own political career to advance the political agenda of Karl Marx.

Now, to be fair, Obama is an ardent disciple of socialist ideology, and his ideology comes first. This is evident in everything the man has done since entering the White House. The war decisions keep getting put off (the latest deadline is “sometime after Thanksgiving”) as war and standing up to radical Islam are not priorities for Obama. His foreign policy is largely designed to undermine America (while simultaneously promote himself) and promote global socialism and utopia. While national security remains an afterthought, healthcare and cap and trade are pursued with a relentless passion. Obama was elected to pursue a radical socialist “fundamental change” of America. He was groomed for this his entire career. So, that he would put his socialist agenda before his political career is not in question. If it came to that, Obama would indeed sacrifice his career for the greater cause of socialist utopia in America. The disagreement is with the assertion that Obama actually thinks his career is in jeopardy.

Everything this administration has done and said during their entire tenure reeks of arrogance. To believe that suddenly Obama realizes that he is merely mortal is laughable. Obama implies he may not run for a second term if his numbers are in the toilet to strengthen the resolve of his fellow democrats and not because of any personal fear that this might end his presidency. He truly believes that he will be loved, obeyed, and ultimately, re-elected. In his self-adulating mind, he is “the one we’ve been waiting for.”

Obama’s hope and stated intention has been to bring “fundamental change” to America. His own Chief of Staff rambles on and on about not wanting “a good crisis to go to waste.” These folks have seized their moment in history to do what decades of socialists and communist sympathizers have failed to do. It is to this end that many are arguing that Obama’s economic policy mirrors that of the Cloward/Piven ecnomic strategy. In short, the strategy proposed by a couple of anti-free market socialist professors from Obama’s stomping grounds of Columbia University, seeks to create such a dependency among the American public and private industry on government largesse, that the entire capitalist system collapses and full across-the-board socialism can fill the void. For more detail on this rather frightening strategy, read this insightful article from the American Thinker.

Think that’s a nutty conspiracy theory? The New York Times has reported Obama as stating that the government stimulus was not given to private companies with the intention of regaining profitability. He intends to have tax cheat Tim Geithner to convey that message to said companies. In the jargon of the Soup Nazi “no profits for you!” If then, the plan in bailing out company after company was not to regain their own solvency and eventual profitability, what was the reason behind such massive government spending?

Obama’s implying that he might not seek a second term, while appealing, shouldn’t be taken literally. This man is a power junky. He cannot and will not leave power without kicking and screaming. This is yet another political gamble set to strong-arm wayward Democrats into throwing away their political careers to advance his beloved socialist “change.” It’s time for grassroots conservatives and fair-minded independents to hold these folks accountable. We need to recruit courageous and unapologetic free market capitalists who will seek to reassert America’s economic and Jeffersonian greatness. In many cases, we need to do so against the wishes of the party bosses. A prime example of which is Florida, where grassroots folks should coalesce behind Marco Rubio instead of the party approved Obama sycophant Charlie Crist. Against so devoted a bunch of Alinsky disciples, we will need the very strongest common sense conservative citizen-legislators. We need folks willing to “go rogue” and defend capitalism, individual liberty and our national security from Obama and his merry band of Mao enthusiasts no matter the cost.

If successful, 2010 could really be the beginning to change we can all believe in, a change that will be Obama’s worst nightmare–a renewed free market capitalist America standing strong in the face of the socialism being thrust upon her by her wayward governing elites.