Islamic Jihad, not George W. Bush, is Responsible for the Fort Hood Tragedy 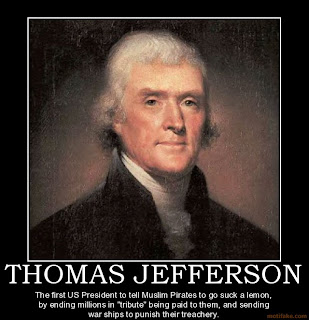 Watching the coverage of the national tragedy in Fort Hood, one is forced into one of two conclusions regarding the media–either they are absolute idiots or they are politically correct cowards. Either way this nation is in for a world of hurt.

The much-maligned 43rd president of the United States for the most part, rightly understood that America is at war with radical Islam. For some reason, the talking heads in the media and the Obama administration have yet to figure that out.

The media was beside itself yesterday and much of the morning today trying to wonder why this Major would gun down his colleagues in cold blood. Had he been listening to Rush Limbaugh, reading the Bible or attending Bob Jones University, however, the entire media narrative would be about how dangerous, bloodthirsty and radical Christians are. Rachel Maddow would be weeping and shaking in fear. Keith Olbermann would freak out and poop his pants in a fit of anti-Christian rage. The Huffington Post and the Daily Kos would be filled with blogs urging readers to kill their Christian infidel neighbors in order to restore peace to the nation.

Of course, we can’t get so hasty with the “religion of peace.” Sure Islam has been at war with the United States since our very first war on terror conducted by President Thomas Jefferson against the Muslim pirates who spent their time capturing our merchant ships, selling our Christian white folks into slavery, taking our stuff and attempting to blackmail our country, but it isn’t politically correct to say so. (It also doesn’t fit the narrative that only white folks are racist slave-traders.) So ignorant is the American public on our rather bloody history with the radical Islamic “Jihadists” that our very own President, Barack Hussein Obama, spent much of his Cairo speech this spring praising Islam and declaring America “not a Christian nation” but in a way one of “the largest Muslim nations.” Sharia Law here we come!

Of course, in the text of his speech, Mr. Obama praised Tripoli for their Treaty with America dating back to 1796 as a positive contribution to our nation’s history as it was one of the first nations to recognize the new American republic. That was the same treaty that established a mutually agreed upon blackmailing of the United States where President John Adams, not interested in going to war, agreed to pay millions of dollars to the Muslim pirates of Tripoli so that they would leave our folks alone and stop selling us Christian folk into slavery. The honorable adherents to the “religion of peace” in Tripoli signed on the dotted line, collected the fee, and continued their mayhem for years until President Thomas Jefferson chose to stand up to them.

Of course, so radical is our Jihad-apologist administration, that they probably agree with their former “Green Jobs Czar” (also known as the man White House Top Advisor Valerie Jarrett beamed about “following for some time” and being “thrilled” to recruit him for the White House) in the belief that George W. Bush and “them Jews” blew up the World Trade Center in some conspiracy theory that makes no sense to anyone other than socialist propagandists like Michael Moore.

So, when a mad-man named Nadal Malik Hasan blows some 12 people away and injures some 30 or more while shouting “Allahu Akbar” the media is completely perplexed as to why this America-loving peaceful gem of a man would do such a thing.

Why, to listen to those folks in the mainstream media, you’d have to conclude that it was George W. Bush’s fault that this all went down. It was his evil war in Iraq which the sane and peace-loving Nadal Malik Hasan was going to be headed to. It was this unjust war that sent the rational future recipient of the Nobel Peace Prize into blinding rage.

Sure, let’s ignore blindingly obvious clue number one: he’s a Muslim. Perhaps that’s why the man’s name was under wraps for so long yesterday. Don’t want to let those evil racist hate-monger Americans know that in a shocking twist this terrorist act was committed by a Muslim. Islam, after all, is the “religion of peace.” (Except for their ongoing bloody Jihad against the western world and “them Jews.”)

Sure, there’s the fact that he apparently had a history of going on and on about how Muslims should stand up and “fight the aggressor” and speaking in general Jihadist terms, but that can’t have anything to do with it. He even apparently posted some of his anti-American Jihadist hatred on the internet. That certainly doesn’t mean anything. It must have been stress. The stress caused by that evil madman George W. Bush.

It just has to be that evil war perpetrated on us by the war-mongering George W. Bush that caused him to snap. He’s just a peace-loving anti-war hero. His Islamic Jihadist worldview is completely irrelevant here. Now if he was Christian or pro-life…

Of course, to make his case against violence and war, Allah’s martyr of “peace” gunned down people in cold blood while screaming the name of Allah in terms that are often associated with Jihadists. Still, we can’t really blame Islam can we? We don’t want to offend any Muslims now do we? Isn’t there just some way to spin it that he was a Christian? Surely he meant something more peaceful by shouting “Allah Akbar.” A loving prayer for those being savagely slaughtered, perhaps?

It’s absolutely frightening how long it took the media to realize that–gasp!–his being a Muslim might be behind the attack. As if to convince themselves, they repeated over and over that “we can’t yet know” why this clown did what he did, while hypothesizing that it might be related to his opposition to the war. It never dawned on these hardcore journalists that the reason he was opposed to the war might be that he was rooting for the other side. The Jihadist rants, the Muslim background, none of that even seems relevant to today’s tough-as-nails journalists. So frightened that they might be “racial profiling” the poor chap is our media that they can’t even acknowledge what is painfully obvious to even a five year old.
Perhaps if the Muslims of the world would like to stop being “racially profiled” they could maybe stop being the ones blowing everyone up. If terrorism was committed anywhere in the world right now by anyone other than Muslims, we might be able to throw them a bone and have rational grounds to suspect someone else. So successful is Allah’s crusade to slaughter the infidels, however, that they have completely locked up the terrorism market. (Somewhere a bleeding heart moral relativist liberal is screaming about the atrocities of America and Israel in defending themselves and lamenting the once every thirty years bombing of an abortion clinic.)

Even the president showed an extremely frightening lack of sensitivity to the subject. No doubt trying to minimize the situation while making radical Muslims feel comfortable, our glorious leader promised to address the situation around 5 P.M. Of course, imagine the surprise of viewers who were treated not to solemn words of sympathy and a calm reassurance to the nation, they were treated to a jovial president giving “shout-outs” to some of his guests at a previously scheduled event. After joking around for some time, it finally dawned on the president that maybe to most of America this sort of blood-shed isn’t funny. Imagine if George Bush had done this. Just imagine the wringing of hands and feigning of horror on the part of the media.

George Bush, you’ll remember, was deemed insensitive and racist (in the words of wise sage Kanye West “George Bush doesn’t care about black people”) because he didn’t have Air Force One drop him into the surging flood waters of Hurricane Katrina the second it hit the coast. President Obama, who still has yet to bother visiting or to even act concerned in the least over this year’s flood victims in Georgia, said through his esteemed spokesman Mr. Gibbs, that his schedule is “so in flux” that he probably won’t get to visit Fort Hood until next week, if at all. (Keep in mind that his schedule’s “flux” did not keep him from visiting New Jersey & Virginia for those “unimportant” elections nearly 10 times in the last month. If he was able to take that many trips for something that was unimportant, how far below “unimportant” does the Fort Hood incident fall?)

Of course, given his tone deaf handling of the Fort Hood situation, one can almost see the Obama administration “not wanting to let any crisis go to waste” and pulling out of Afghanistan under the justification that even our troops are against it now,because peace-loving proud American Muslim Nadal Malik Hasan’s only motivation was to stop the blood-thirsty American war machine and not at all a desire to “slaughter infidels” as his precious Mohammed commands.

The sad reality is that America remains at war with a very violent and blood-thirsty radical Islam. The Jihad continues while America sleeps. As sad as the tragedy in Fort Hood is, the lack of clarity regarding the very real threat of radical Islam is equally jarring. Until the west mans up enough to confront the evil of radical Islam, it will remain the losing side of a blood-thirsty war for civilization. It is a war that admittedly isn’t as important as health care for all or cap and trade initiatives that will send utility bills for the average American “through the roof,” but nonetheless one that the president should maybe make some time to consider.

In the meantime, let’s bury our dead, care for our wounded and vow to bring them justice. For though Obama is too busy making jokes to notice, Allah is responsible for the Fort Hood tragedy, not George W. Bush. It’s time for us to pray that those slain in Texas this week will not die in vain and that America’s leaders will finally get it. Our whole way of life depends on it.

White House Builds a 'Wall'...Around the President
Townhall
People are still having fun with that photo of hardcore MAGA QAnon insurrectionists at the #JusticeForJ6 rally
Twitchy
Police Detain Man for Having a Gun at J6 Rally in DC, but There's a Big Twist
Redstate
Contradictions Gone Viral
PJ Media