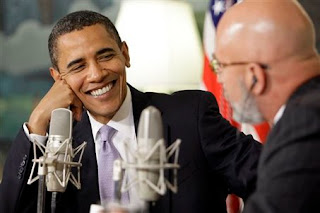 Talk radio personality and MSNBC pundit Michael Smerconish argued in the Philadelphia Inquirer this week that the GOP needs a new primary process that allows moderates a better shot at the nod. Only by nominating moderates can the GOP hope to survive. He couldn’t be more wrong.

Smerconish warns the GOP against nominating the likes of Sarah Palin, Mike Huckabee or Mitt Romney, as each can “excite the base” but would lose the general election to President Obama. History and current polling trends suggest otherwise.

Of course, before even getting to the bulk of Smerconish’s argument, one has to only look back as far as last year to point out that the “moderate” Smerconish, a veteran of George H.W. Bush’s administration, endorsed Barack Obama for president. So naturally, one has to question the motives of Barack’s favorite talk radio host when he begins prescribing the remedy to oust his anointed candidate of just one year ago.

Has Smerconish been so disillusioned with Obama already? Less than a year later, is Smerconish really against a second Obama term? Surely, he has disagreements with the president on policy, but those disagreements existed before the election and Smerconish was able to look past them and endorse the political heir of Ayers and Alinsky nonetheless. Smerconish’s recent sit down love-fest with the president on his radio show speaks the loudest as to his street cred in all things Republican.

It has been made abundantly clear that only Obama sycophants, supporters, and propagandists will be given any access to the White House. The daily invective hurled at anyone even remotely critical of the White House by the esteemed White House Press Secretary (the befuddled Mr. Gibbs) and Obama Communications Director (and Mao enthusiast) Anita Dunn have more than made their point. With the Obama administration, you only get access if you are “friendly” to the White House. Fox News and all others are systematically cut off from any real access for fear a little truth will sneak out. That the president willingly sat down with Smerconish speaks of his good standing with this White House and should put up red flags for those who oppose the Obama administration.

Indeed, Republicans would be foolish to take the advice of someone who publicly supported their opponent as recently as last year.

Moving from the motivation to the actual argument, Smerconish bases his perceived sad state of the GOP on a poll, arguing, “That there has been an exodus from the GOP cannot be denied. A Washington Post/ABC News poll released last week found that just 20 percent of respondents identified themselves as Republican – the lowest figure since 1983.”

Smerconish ignores this conservative growth by charting a moderate path for the GOP in order to win. Where exactly is the logic in moving away from the largest (and currently growing) political ideology? It’s notable that no such calls are ever made by Smerconish or others for the Democratic party to become less liberal, despite abysmal showings for liberals in both of these polls. This also despite the fact that poll after poll has been showing that Americans are increasingly at odds with the Democratic agenda as the president’s polling numbers continue to plummet.

He even quotes a “Republican operative” named Roger Stone as supporting his hypothesis in a bit of subtle peer pressure. Oh, well if Roger Stone is for it, it must be good! Stone’s career reads like a who’s who among liberal to moderate “Republicans.” He worked for Richard Nixon & George H. W. Bush (both hardly conservatives). He worked for moderate Bob Dole in the senate and the moderate-to-liberal former Governor of New Jersey, Tom Keane. In 1996, he ran the Arlen Specter for President campaign (that should tell you all you need to know about his politics.) In fact, the only true conservative name to come up on his list of clients was Ronald Reagan, and pretty much every Republican operative worked for him. Other than all of that, yeah, let’s listen to his advice.

Smerconish’s advice also ignores the lessons of history. Of course, the ever-helpful political punditry in the media never lacks for opinions on the proper way to save the GOP. Of course the roadmap is always the same. Follow the middle of the road. It’s your only hope. Thus, with all the sincerity of the big bad wolf, the media constantly tries to trick the little GOP piggies into letting them in to the “big tent.” Year after year, the establishment GOP nitwits do just that.

Recent history is clear on Smerconish’s hypothesis. Gerald Ford was a moderate and lost to Jimmy Carter in 1976. Ronald Reagan called the party to offer a bold conservative alternative to the liberal Democrats in the late 1970s and led the party to two electoral landslides in 1980 and 1984. His successor, George H. W. Bush, was elected largely on his coattails in 1988, and lost four years later in 1992 after abandoning the more conservative policies of Reagan and embracing the political middle (no doubt thanks to the wisdom of Roger Stone and Michael Smerconish). Four years later, moderate GOP senator Bob Dole also went down to defeat to the strangely conservative sounding Bill Clinton. George W. Bush learned the lessons of his father and campaigned as a more conservative candidate in 2000 and 2004, before abandoning much of his conservatism in his second term, resulting in an approval rating in the twenties. Finally, last year, the GOP nominated yet another moderate in one last attempt to appease the media. In fact, they nominated the media’s favorite “maverick” John McCain. Suddenly, the media hated his guts with all the fury of a high school girl after being dumped. McCain not only lost the election, but he failed to even get Smerconish’s endorsement despite meeting the “moderate” qualification.

History and recent polling seem to be colluding together to disprove the thesis of Mr. Smerconish. Not to be left out, even recent events disprove his theory.

Sarah Palin, the hated and unelectable woman that the media keeps telling the GOP to stay away from, has a bestselling book weeks before it even comes out. So unelectable and loathed by the American people is she, that within a day of her endorsement, Conservative Party congressional candidate Doug Hoffman found himself with an additional $116,000 in campaign cash. Less than a week later, he went from third to first place in public opinion polling, while the “moderate” Republican has fallen to last place.

That sure doesn’t sound like an unelectable and much-loathed woman to me.

The GOP needs to reclaim the mantle of Reagan or risk becoming extinct. Only when the party boldly proclaims conservatism is victory possible. There is a very clear roadmap to a GOP victory in 2012 and it has nothing to do with moderation. The GOP needs to offer a stark difference to Obama or guarantee him a second term. This remains a center-right nation. With 40% of Americans calling themselves conservatives, the GOP would do well to head in their direction.