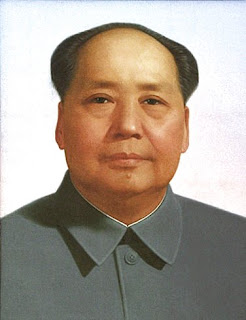 One of my favorite philosophers, Adolph Hitler, used to say that he had to fight his own war. Think about that. Isn’t that neat? You can fight your own wars.

Did the above comment bother you? No, Adolph Hitler is not one of my favorite philosophers. He was a nefarious genocidal mad-man, not one worthy of citing in a speech to students. Rational people understand that you don’t cling to the nuggets of wisdom that come from such folks. Not so in the Obama administration, however.

Obama Communications Director Anita Dunn is the latest Obama aide to be revealed as a communist-loving extremist. Surely, as with all of the previous examples (Van Jones, Cass Sunstein, Carol Browner, Reverend Wright, Bill Ayers, Rashid Khalidi, Louis Farrakhan, Mark Lloyd, Valerie Jarrett, et al) we will find that this Anita Dunn is not the Anita Dunn that Barack Obama knows. He surely had no idea of her school-girl crush on a communist dictator responsible for the deaths of tens of millions of people.

At issue is a speech in which the seemingly unstable Dunn astonishes her crowd by referring to Chinese Communist Dictator, Chairman Mao, as one of her “favorite philosophers.” In fact, here’s the genocide apologist and fan club president in her own words:

“The third lesson and tip actually comes from two of my favorite political philosophers, Mao Tse Tung and Mother Theresa, not often coupled with each other, but the two people that I turn to most to basically deliver a simple point, which is, you’re going to make choices. You’re going to challenge. You’re going to say, ‘Why not?’ You’re going to figure out how to do things that have never been done before. But here’s the deal: These are your choices. They are no one else’s. ??In 1947, when Mao Tse Tung was being challenged within his own party on his plan to basically take China over, Chiang Kai?shek and the Nationalist Chinese held the cities, they had the army, they had the air force, they had everything on their side. And people said, ‘How can you win? How can you do this? How can you do this against all of the odds against you?’ And Mao Tse Tung said, you know, ‘You fight your war, and I’ll fight mine.’ And think about that for a second.

So you have the Communications Director of the Obama Administration praising the wisdom of a Communist Dictator who “had to fight his own war” to “basically take over China.” She couples him with Mother Theresa to soften the blow, yet then goes on in glowing detail to share how glorious it was that he took over China. Her account is one of awe and wonder. She is making the point that this man “fought his own war” to accomplish something great. As a favorite political philosopher of Dunn’s, she is openly admitting to being smitten with Communist dogma. Just like Ayers. And Van Jones. And Cass Sunstein. And Carol Browner. And Obama’s alcoholic, womanizing and absentee father. And pretty much any influential person in Obama’s life. He’s not though. He just works with those folks and consistently gives them positions of influence and prestige.

Also, keep in mind that Mao Tse Tung’s glorious communist revolution of China led to countless murders, oppression and blatant human rights violations in the decades to follow. In fact, his praiseworthy “Great Leap Forward” campaign intentionally led to the starvation and death of anywhere from 34 to 70 million people depending on what study you look at. What’s a few million when counting mass murder among Communist friends?

So the man directly responsible for killing 34 to 70 million people by “fighting his war” in “taking over China” is one of two political philosophers that Anita Dunn “turns to the most” when making her point, and his “war” is one that Dunn recounts with glee to an unwitting crowd of impressionable students. The students slaughtered in Tiananmen Square in 1989 thanks to the Communist regime installed via Mao’s own “fight” couldn’t be there that day, what with the being dead at the hands of a brutal Communist regime and all. Of course, the students in China today know nothing of that horror in 1989 because they, like Dunn, seek to control what information the public gets to here. Good to know.

Of course, this isn’t a scandal because who among us doesn’t quote maniacal Communist Dictators, murderers and genocidal mad-man to make points?

Dunn’s White House machine has begun to spin the story by claiming that she was making a joke. Of course, to believe that lie, you would have to totally disregard the delivery and content of the speech. Dunn goes on and on about how great he is and gives a thorough history of his life story (minus the whole being responsible for the deaths of millions of people.) Throughout her part on Mao, she grins like a cheshire cat and feverishly licks her lips repeatedly. In short, she appears similar to any teen girl when you mention the Jonas brothers.

Of course Dunn would adorn her walls with posters of Mao. She’s the Obama Communications Director. She wants to “control the media” for Obama. She bragged about their control during the campaign where she boasted that, “very rarely did we communicate through the press anything that we didn’t absolutely control.”

Dunn went on to explain that they would pre-tape statements from their officials to avoid actually being interviewed by the press. This, of course, at the behest of the man who wanted to be the most “transparent” administration in history, who has since decided to be the man hiding behind the TelePrompter, staging and scripting every press conference and appearance down to the last jot and tittle.

Again the ghosts of Tiananmen Square sit staring ominously at us from beyond the grave. Their deaths, and the 34 to 70 million others at the hands of Communist China testify against the current “Communism is cool” dogma flowing from the lips of folks like Dunn.

Dunn, however, as an ardent opponent to free speech and the free press, would look longingly at the accomplishments of Communist Dictators while ignoring their horrific human rights record. Like her colleague over at the FEC, Mark Lloyd, she fancies herself a “revolutionary” like Mao or Hugo Chavez, who might just need to strip away free speech so that you dense Americans can finally be told what’s good for you whether you like it or not.

Supporters would have you think it isn’t a big deal that the White House Communications Director cites a famous Communist Dictator who is responsible for tens of millions of deaths and decades of blatant human rights violations as one of her favorite political philosophers. Maybe to some it isn’t. To those of us who stand for freedom and human rights (and yet do not have a Nobel Peace Prize to show for it) it is a big deal. It becomes even more ominous when seen in the proper context of what Dunn’s job is and the gaggle of similarly minded radicals rounding out the Obama inner circle. Whether Obama finds Dunn’s comments innocuous, will feign ignorance of such views, or agrees with them, it is another painful reminder of just how unfit the leader of the free world is for the office that he holds. 2012 cannot come soon enough.

Buy Me Some Peanuts and Cracker Jacks
Becca Lower

Newsom Seeks to Delete Law That Makes it a Crime to Kill a Baby After It's Born
Townhall
'It is pretty ironic': Radio host asks teen climate activist the last time she flew on a plane and where
Twitchy
Lead Prosecutor for Robert Mueller Rips the Mask Completely off in Insane Display
Redstate
Parents and Students Protest Transgender Teacher With Huge Fake Breasts
PJ Media