Obama: A leader only Khadafi, Ahmadinejad, Chavez, & Putin could like 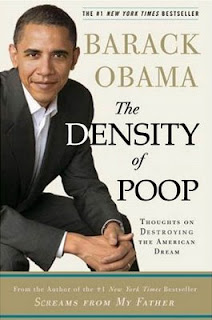 Mmm. Mmm. Mmm. Barack Hussein Obama. As school children in my own state of New Jersey worship Obama in song and chants during the school day, his emminence has taken his rightful place among the dictators, thugs, and terrorists at the United Nation. Beaming with pride as he speaks of a “global” vision (one that doesn’t want America to have any position of prominence) Barry has been living out a school-boy fantasy of his while rubbing elbows with the leaders of Iran, Libya and Venezuela among others. He has no doubt cried tears of socialist joy as Libya’s Khaddafi called for a new Taliban-led nation in place of Afghanistan. As that adorable love-muffin Hugo Chavez joked that the “stench of sulfur” was gone and prayed a blessing over Obama to protect him from an assassin’s bullet as he seeks to impose socialism over America, he probably felt the close bonds of brotherhood.

Barack Hussein Obama (which only recently became okay to say) has been having a blast at the United Nations. While dictator after dictator has slammed the United States and spent hours lying, making up stories, and rambling incoherently, Barry has been spellbound. Among the highlights of Barry’s speech to the UN, largely designed to apologize for America and make nice with the thugs of the world playground:

“In Moscow, the United States and Russia announced that we would pursue substantial reductions in our strategic warheads and launchers. At the Conference on Disarmament, we agreed on a work plan to negotiate an end to the production of fissile materials for nuclear weapons. And this week, my Secretary of State will become the first senior American representative to the annual Members Conference of the Comprehensive Test Ban Treaty.”

Nice point Barry. Show those terrorists around the world hellbent on destroying us that we will defeat them by scrapping our own weapons. We will fight with our bare hands when they attack us with chemical, nuclear or biological weaponry. It’s better for the environment. North Korea, Iran, Venezuela, and Al Queda bring it on! We have a knuckle sandwich waiting for you after you blow us up.

“The time has come — the time has come to re-launch negotiations without preconditions that address the permanent status issues: security for Israelis and Palestinians, borders, refugees, and Jerusalem. And the goal is clear: Two states living side by side in peace and security — a Jewish state of Israel, with true security for all Israelis; and a viable, independent Palestinian state with contiguous territory that ends the occupation that began in 1967, and realizes the potential of the Palestinian people.”

So the community organizer can’t interfere into the workings of Iran because that isn’t our business, but we sure as heck can tell Israel to shove it. That massive country is really too large anyway, so they should give up more land to the “peace-loving” Palestinians. Of course, after giving this land and dividing Jerusalem, the Palestinians will still hate them and want them dead, but at least they will have usurped more land from, as Reverend Wright calls them, “them Jews.”

Barry also spent a large amount of his speech praising the United Nations; it sure would be nice if he even once spoke as highly of America. Of course, to a liberal, a useless organization that accomplishes nothing but feels good about their intentions is worth talking about until the cows come home. Who cares if the food and humanitarian aide is confiscated by dictators while the “peace-keepers” spend their time raping the natives? They mean well.

Obama also spent time with the wise sage David Letterman to tell him that we need more regulation in our lives to avoid further economic collapse. Of course, it was government regulation in the first place that sent the market into a tailspin via the ridiculous regulations on the nation’s lenders regarding high-risk loans to folks who couldn’t pay them. But, sure let’s do more of that. Maybe this time it will work. Mmm. Mmm. Mmm. Barack Hussein Obama. Of course, Hussein’s friends at ACORN were the folks who pushed that legislation that caused the collapse of the market, but again, let’s defer to the wisdom of the great Chicago Hope on that one (after all despite working for ACORN for years, he has now barely any idea of who they are!)

Of course, Barry’s time hasn’t been all business. In the first 9 months of his presidency, “Mmm. Mmm. Mmm.” Barack Hussein Obama has given over 120 interviews, while predecessors Bush and Clinton each did about 40-45 during the same stretch of time. Perhaps that is why the Commander-in-Chief of the United States has only had ONE meeting with his commander in Afghanistan in over 70 days. Who needs to deal with a small matter of war when you can yuck it up with a stooge like Letterman?

Another reason Barry can’t do anything serious on the international stage is that he is all booked up. Fresh off the success of his international hit of denying a missile defense for Poland and the Czech Republic, his “American Apology” tour will again take to Europe to promote holding the 2016 Olympics in Chicago, where no doubt Reverend Wright and Bill Ayers will have a field day commiserating with the visiting dignitaries (at least the socialist/communist ones!)

Yet another reason may be that he was too busy filming promos for the sure-fire late night hit starring the funny-as-a-dead-puppy George Lopez.

Yet never let it be said that Barry is all fluff and no backbone.

In response to an insurance company sending out information to their clients on what Obamacare meant for their company, Obama’s response is to threaten an investigation. In response to ordinary Americans asking questions and resisting one-stop socialism, his response is to attack the folks as “racist” “angry mobs” or claim that they are somehow not authentic. (Apparently not as gritty and realistic as a former community organizer boldly standing before styrofoam “Greek columns” in an attempt to portray himself as some mythical god come to deliver America in their darkest hour during a national political convention complete with a court jester running mate and fireworks!)

In response to Sarah Palin or any other prominent leader raising serious questions about his plan, Obama calls them liars, then on cue resumes reading his same speech from the TelePrompter for the 1,000th time. Since sequels are never as good as the first one, someone is bound to shout “YOU LIE!” in the middle of the speech, sending Obama caterwauling about how mean the big bad “racists” are.

In response to media critics, Obama simply cuts Fox News out of any interviews, and has his crazed Hugo Chavez Fan Club President Mark Lloyd attempt to use the F.E.C. to silence all opposition via government control of the media. In part two of this plan, Obama offers to bail out newspapers (so that he can own them and cause them to become “non-profits” which they pretty much are now anyway) and seeks to indiscriminately cut off internet access to folks like me who write things online that don’t sound like: “Mmm. Mmmm. Mmm. Barack Hussein Obama. Red and yellow black and white he said we are all equal in his sight.”

Yet, for all of his maniacal boldness regarding opposition within his country (or people who actually believe in individual liberty, capitalism and the freedom to speech) he refuses to bat an eye when Iran starts shooting off rockets into the sky like it’s “Shock and Awe” in Baghdad again. His response is to say Russia will help us. Then, of course, they back out or start hemming and hawing and he changes the subject to health care (again) and mumbles something about being “fired up” and “ready to go” for “hope” and “change” while a chorus of paid actors sitting behind him chant “yes we can.”

He is remarkably consistent, however. Healthcare needs to be passed right now without debate or even the slightest perusal of the bill, meanwhile Obama refuses to meet with or listen to the military leaders engaged in a war. He needs healthcare reform as a matter of life or death, but needs a few more weeks to consider what to do about those soldiers dying in Afghanistan.

He has no problem emphatically telling Israel over and over again to calm down, but begins reading Code Pink’s talking points when dealing with Iran, Venezuela, North Korea, etc. Thank God we have Benjamin Netanyahu to stand up to the world’s dictators, albeit virtually alone. Word on the street is that crazy conservative tax-cutter Angela Merkel in Germany was just re-elected in a surprise landslide, so maybe he will ironically have an ally in Germany.

The most revealing contrast to Obama’s “leadership” this past week came when a former governor of Alaska took to the stage in Hong Kong and gave a wide-ranging and largely foreign policy oriented speech which caused even the New York Times to praise it. Never has Obama’s lacking leadership in the face of a very real and growing international threat been more painfully obvious. On one side of the world, Sarah Palin, a military mom, spoke passionately about defending America from a position of strength and talked about freedom and pride in America in a speech that could have been delivered by Ronald Reagan. On this side, however, we have the know-it-all narcissist reading his talking points, throwing temper tantrums and appeasing dictator after dictator with such sniveling, elitist anti-American panache that even Jane Fonda blushes.

America needs a leader who likes, respects, and is willing to fight for the greatness and liberty that this shining city on a hill has boldly stood for since our founding. We need a leader who is a disciple of Jefferson, Adams, and Washington who understands that the great thing about America is not our government, but the freedom we preserve for our people. We need a tough as nails guardian of our American liberties.

The woman from Alaska looked an awful lot like that guardian as she spoke in Hong Kong, and in comparison, our own leader looked like the corrupt slumlord that he has always been. ACORN must be so proud.

They Know They Are Losing

The CDC Signals Another Major Goalpost Move on Being 'Vaccinated'
Bonchie