UPDATE: This is what I get for saying something nice about Barack Obama! Never again! I single him out because of his “brave” stand on Afghanistan and he immediately begins bowing to pressure from the left to abandon it.

The following is from my Examiner.com site. You can view the original here. 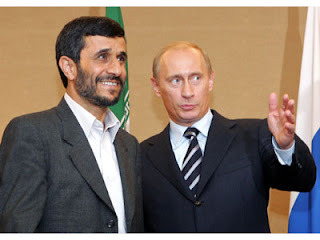 Barack Obama continues to view the world through naive rose-colored glasses when it comes to foreign policy. The only bright spot at the moment, of course, being Afghanistan. President Obama currently supports a surge strategy similar to the one used in Iraq to bring things under control in Afghanistan. On that issue, he has the full support of the conservative movement. Not so much on the statement that “victory is not the goal” in Afghanistan, but in the actual tangible policy, he has our support.

Of course, with the lunatic fringe on his left wetting their pants in fear over the war in Afghanistan, he is going to be getting a significant amount of pressure to “cut and run” from Afghanistan before the job is done under the false pretense that running away from terrorists hellbent on killing us will make us safer. As a result, conservatives should continue to support the President on this issue because he is right.

You would think that the left-wing radicals would be happy overall with the way things are going. Obama’s approach to the North Korea missle launches has been to ignore him. His response to the psychotic anti-semitic loon running Iran’s plans to bring about the Islamic Messiah via nuclear war against Israel and America has been a standing invitation for tea and crumpets at the White House. To be fair, Reverend Wright probably didn’t ever teach Obama on the portion in Proverbs that cautions against “arguing with a fool” as he had so much ground to cover in hating/dehumanizing white folks, America and “them Jews” that he never got around to any actual scripture, so perhaps Obama’s Muslim, er, Christian faith never embraced that teaching.

Determined not to fight a “stupid war” like the one with Iraq, Obama has taken the opposite approach of George W. “It’s okay to interrupt my state of the union speech via boos and call me a liar without an apology” Bush by choosing to ignore intelligence reports that suggest Satan’s little brother, Mahmoud, has the capacity to make nukes and is close on the whole rocket thing. We can’t act, what if those reports are wrong? We might accidentally free millions of people from oppression and remove a genocidal mad-man from power BEFORE he conquers half the world! That would be horrifying!

Everyone knows the only way to deal with a genocidal mad-man is to coddle him and legitimize his regime by planning meetings and allowing him nuclear technology “for power purposes.” So enamored of the Democratic leadership are our enemies that Osama Bin Laden (remember him?) has Jimmy Carter’s anti-semitic tear-jerker about the plight of the compassionate Palestinians, who after all, just want to kill as many Jews as they can, on his must-read list. That should tell you all that you need to know about the teachings of James “everyone who criticizes Obama is racist” Carter. It is truly baffling that this man won only one term before losing in a massive landslide to Ronald Reagan.

Even though Iran speaks of nuking Israel and America, we can rest assured that those statements are just crazy and to be discounted. The statements made by that same genocidal mad-man where he claims that he needs nuclear technology only for power purposes are the God’s honest truth, however. Why would a man hellbent on world domination via Shariah Law and nuclear war lie about his true intention for nuclear technology? Certainly a man who has said the following wouldn’t try to deceive America about his plans:

“Anybody who recognizes Israel will burn in the Islamic nation’s fury.”

“The Holocaust is a false claim, a fairy tale, used as a pretext for crimes against humanity.”

“Israel has no future.”

“[Israel] must be wiped off the map.”

“Those who think they can revive the stinking corpse of the usurping and fake Israeli regime by throwing a birthday party are seriously mistaken. Today the reason for the Zionist regime’s existence is questioned, and this regime is on its way to annihilation.”

“Them Jews aren’t going to let me speak to him.”

Okay, so the last one was from Barack Obama’s spiritual mentor Reverend Wright, but you get the idea.

Indeed, Obama told the world in June, while giving a speech in Prague that he “supports Iran’s right to peaceful nuclear energy with rigorous inspections.” Of course, if Iran, were to say agree to this policy and then cut off inspections completely and violate in excess of 16 United Nations resolutions on the matter, we know with certainty that Obama and his peace-loving pals would pursue a false peace by ignoring the problem. They call this Operation Ostrich. That was made abundantly clear with the Iraq situation. Since Iran’s leader is deranged, and since inspections would fail due to his maniacal plan to bring about the end of the world via nuclear destruction, it is important to realize that this plan would easily allow Iran nuclear weaponry without consequence from the Obama administration. With America largely abandoning Israel in her time of need, thank God they have Benjamin Netanyahu to stand (albeit alone) against the anti-semitism of the Middle Eastern state sponsors of terrorism.

The glory of Operation Ostrich could be seen earlier this year when Muslim Pirates were ignored for days before finally being engaged by the Obama administration. Of course, that may have been because Obama was confused about the Muslim pirates’ true intent, as his speech in Cairo hailed the 1796 Treaty of Tripoli as a positive recognition of our country by the forward-thinking and peace-loving Muslim world. That delightful treaty, of course, was nothing more than an agreement of blackmail whereby America would pay millions of dollars to Muslim pirates so that they wouldn’t attack our ships, sell us into slavery and take our stuff. To Obama, however, that was a moment of Muslim contribution to America worth celebrating.

Under Operation Ostrich, North Korea was also free to launch its missiles at will, and Russia continued to form secret alliances with Iran. This week, Operation Ostrich has re-surfaced as Obama threw former Soviet states Poland and the Czech Republic under the bus by announcing that America would scrap our plans for a missile defense system. Sure, Russia is licking its chops right next door about re-taking it’s former conquests, but we don’t want to offend Putin by defending those folks. This should be no surprise after Russia’s attempt to re-conquer Georgia last year elicited a confused “both sides should back down” position from Obama after several days of his on the international crisis (to be fair, he was on vacation and had only broken his silence during that time to show off shirtless photos of himself on the beach and to discuss his love for SPAM.)

Again, Obama continues to want to see the best in folks. By refusing to see the terrorist side of pals Bill Ayers and Jeff Jones, the communist side of Mark Lloyd, Carol Browner, Cass Sunstein & Van Jones, the racist side of Reverend Wright & Rashid Khalidi, and the non-tax-paying side of Tim Geithner, the great Bamster continues to only see the good in folks. So like Kim Jong Il in North Korea and our pal Mahmoud in Iran, Barry refuses to see the bad in former KGB agent Vladimir Putin. It’s nice to try to see the good in folks, but the leader of the free world can’t afford that luxury. Universal healthcare doesn’t much matter when you have the pre-existing condition of having been nuked to death by your enemies.

So, those of us sane enough to reject the policy of sticking our head in the ground when facing real and growing threats to our country must support Obama where we agree and prod him to action where we don’t. On the issue of Afghanistan, he deserves our support, on the issue of everything else, we need to remind him of the lessons of history.