Perhaps Rachel Maddow Will Be Upset By This Murder? 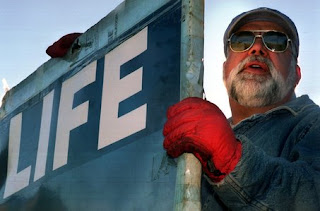 Several weeks ago, I posted about Rachel Maddow’s shock and horror over the untimely murder of the saintly church-going Dr. Tiller, a late-term abortion doctor, who was gunned down in cold blood. Maddow was concerned about another late-term abortion provider who was being “targeted” by Operation Rescue for “peaceful demonstrations” that weekend, which in Maddow’s mind, meant an all out assault on his office would occur with massive casualties. (Perhaps she was mistaking Operation Rescue with her doppleganger Janet Reno, who bravely charged the Waco compound and blew those folks away before breaking into Elian Gonzalez’s house with guns blazing so as to protect themselves against the menacing threat of a small child.)

Today, we hear news from Owosso, Michigan that a well-known pro-life activist named Lawrence Puillon was gunned down in cold blood in front of a local school. Certainly the man posting signs in support of “Life” was such a menace to whoever shot him that they felt their life was in danger. After all, he was 63 years old, with leg braces and an oxygen tank. The poor abortion-loving crowd must have just been terrified of him.

The police have a suspect in custody, but no motive has yet been released. It could well be that the man was just in the wrong place at the wrong time. It, could also have to do with his beliefs. In the past Puillon was spit upon, screamed at, threatened, and once had fruit thrown at his head.

Don’t worry folks. The local Planned Parenthood has already weighed in and told the local press that they had nothing to do with this. They also snuck in a comment that they would “Certainly we do eveyrthing we can to ensure the safety and security of our clients” but that they would nonetheless cooperate with the investigation if called upon. Planned Parenthood, like our gal Rachel, wants to make sure to remind folks of the “danger” of pro-life activists. They might see a sign or pamphlet that tells them the “mass” they are going to have removed is actually another life! Oh the horror! What terrorists!

Eerily, the man told a friend of his, the President of the Flint Right to Life that he was “prepared to die” in defense of the unborn if need be. It may well be that he spoke prophetically.

Whatever the reason, a good American who simply wanted to stop what he believed to be murder of innocent babies, was murdered in cold blood. This should be a cause for outrage for everyone. One has to wonder how soon Rachel Maddow will be reporting on this with tear-filled eyes and a hysterical report of the rise of pro-choice terrorism.

I’m sure she’ll get right on that.