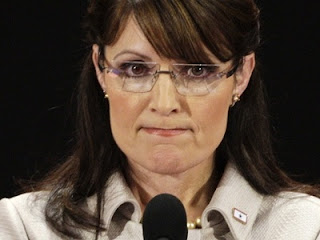 Sarah Palin has just begun to fight. And the liberals are in the corner weeping, shaking and peeing their pants. That mean woman just won’t go away. They tried everything they could to make her irrelevant, but she just won’t go away. Please make her stop picking on us. Harry Reid is probably ready to declare another war lost, Nancy Pelosi is grinning like an idiot while rocking back and forth, Joe Biden is making up stories to get his mind off things, and Ted Kennedy is drinking.

As for her latest assault on liberal idiocy, the following comes from Sarah Palin’s Facebook Notes page:

“I join millions of Americans in expressing appreciation for the Senate Finance Committee’s decision to remove the provision in the pending health care bill that authorizes end-of-life consultations (Section 1233 of HR 3200). It’s gratifying that the voice of the people is getting through to Congress; however, that provision was not the only disturbing detail in this legislation; it was just one of the more obvious ones.

As I noted in my statement last week, nationalized health care inevitably leads to rationing. There is simply no way to cover everyone and hold down the costs at the same time. The rationing system proposed by one of President Obama’s key health care advisors is particularly disturbing. I’m speaking of the “Complete Lives System” advocated by Dr. Ezekiel Emanuel, the brother of the president’s chief of staff. President Obama has not yet stated any opposition to the “Complete Lives System,” a system which, if enacted, would refuse to allocate medical resources to the elderly, the infirm, and the disabled who have less economic potential. [1] Why the silence from the president on this aspect of his nationalization of health care? Does he agree with the “Complete Lives System”? If not, then why is Dr. Emanuel his policy advisor? What is he advising the president on? I just learned that Dr. Emanuel is now distancing himself from his own work and claiming that his “thinking has evolved” on the question of rationing care to benefit the strong and deny the weak. [2] How convenient that he disavowed his own work only after the nature of his scholarship was revealed to the public at large.”

I can only imagine what the sweaty, nervous and often befuddled esteemed Mr. Gibbs will look like trying to respond to the latest onslaught from the irrelevant woman from Alaska. There will be nervous laughter for sure, and a good portion of stuttering. He’ll lie his rear end off and then try to distract the reporters by bringing up the growing threat to Obama from right-wing crazies or announcing that they bombed a baby formula factory in Iraq. Of course, Dr. Emanuel is just following the same path of everyone in the Obama administration. Obama was for single payer before he was against it/for it now, as Sarah Palin noted in her post, and as I noted in my Examiner.com column several days ago. The Obama record is littered with various references to Barry’s love and longing for the single payer system. That’s not popular now, so he’s against it (if only publicly.) Tim Geithner was against paying income taxes before he was for it as the Secretary of the Treasury. Senator Biden declared Obama “the first clean and articulate black man” to emerge on the national scene before putting his racism aside to join him on the ticket.

It is the Obama way. Say whatever will get the most euphoric worship from the audience and then do whatever you want. If they don’t like taking grandma out back and shooting her, claim you know nothing about such a thing. If they don’t want tax increases spew nonsense out of your mouth about cutting costs while your underlings take to the national talk shows to say taxes will be raised. As long as you don’t say it, that’s fine.

Palin continues her assault by talking about what a single payer plan would look like:

“A single-payer health care plan might be what Obama would like to see, but is it what the rest of us would like to see? What does a single payer health care plan look like? We need look no further than other countries who have adopted such a plan. The picture isn’t pretty. [4] The only way they can control costs is to ration care. As I noted in my earlier statement quoting Thomas Sowell, government run health care won’t reduce the price of medical care; it will simply refuse to pay the price. The expensive innovative procedures that people from all over the world come to the United States for will not be available under a government plan that seeks to cover everyone by capping costs.

Our senior citizens are right to be wary of this health care bill. Medical care at the end of life accounts for 80 percent of all health care. When care is rationed, that is naturally where the cuts will be felt first. The “end-of-life” consultations authorized in Section 1233 of HR 3200 were an obvious and heavy handed attempt at pressuring people to reduce the financial burden on the system by minimizing their own care. Worst still, it actually provided a financial incentive to doctors to initiate these consultations. People are right to point out that such a provision doesn’t sound ‘purely voluntary.’”

To those wacko liberal nutcases trying to claim Palin was for death panels before she was against them, she puts them in their place:

“Last year, I issued a proclamation for “Healthcare Decisions Day.” [6] The proclamation sought to increase the public’s knowledge about creating living wills and establishing powers of attorney. There was no incentive to choose one option over another. There was certainly no financial incentive for physicians to push anything. In fact, the proclamation explicitly called on medical professionals and lawyers ‘to volunteer their time and efforts’ to provide information to the public.

Comparing the ‘Healthcare Decisions Day’ proclamation to Section 1233 of HR 3200 is ridiculous. The two are like apples and oranges. The attempt to link the two shows how desperate the proponents of nationalized health care are to shift the debate away from the disturbing details of their bill.”

She then tackles the titanic price tag for such a utopian health care plan:

“Our nation is already $11.5 trillion in debt. Where will the money come from? Taxes, of course. And will a burdensome new tax help our economy recover? Of course not. The best way to encourage more health care coverage is to foster a strong economy where people can afford to purchase their own coverage if they choose to do so. The current administration’s economic policies have done nothing to help in this regard.

Health care is without a doubt a complex and contentious issue, but health care reform should be a market oriented solution. There are many ways we can reform the system and lower costs without nationalizing it.”

She also points to some suggestions made by Arthur Laffer in the Wall Street Journal:

“A patient-centered health-care reform begins with individual ownership of insurance policies and leverages Health Savings Accounts, a low-premium, high-deductible alternative to traditional insurance that includes a tax-advantaged savings account. It allows people to purchase insurance policies across state lines and reduces the number of mandated benefits insurers are required to cover. It reallocates the majority of Medicaid spending into a simple voucher for low-income individuals to purchase their own insurance. And it reduces the cost of medical procedures by reforming tort liability laws.” [8]

Sarah Palin is single-handedly driving the debate from the right. There are other folks out there doing their best. Mike Pence, for one, and Jim DeMint is another. Neither, however, has the instant following that Palin has.

This debate has demonstrated to the media the intellect of Palin and the ability to take a stand on a national issue against the all-powerful Democratic governing majority and their willing allies in the media. She takes the fight directly to the American people while going around the media at large. Her message is resonating with the American people who are increasingly opposed to this bill. The power of her argument is also seen in the actions of the congress.

Sarah Palin is effective because she speaks from a perspective of someone confident in their beliefs. Too often in the political world, the folks on the right go all wobbly on us because they want to have someone like them or it isn’t popular to be conservative. Thus, they water down their beliefs or back away from fights when they look too risky. They play it safe. Sarah Palin demonstrates time and time again that she is someone willing to walk into that fight whether or not it is popular to do so. Her efforts to stave off socialist medicine in this country have been but an example of this.

As the liberal governing majority begins to pare down the bill based on the onslaughts of the right led in a large part by Sarah Palin and talk radio, we are taking the war on health care one battle at a time. Sarah Palin is just the general we need for a time like this!

It Sure Looks Like CBS News Edited Body Cam Footage to Omit a Key Frame in Adam Toledo Shooting
Townhall
'Journalism...ish': The Oregonian deletes 'poorly worded' tweet on the police-involved shooting of a 'white male in his 30s' in Portland park
Twitchy
Men Are Getting Tired of the Hyper-Sexualized Woman
Redstate
The New World Order Is Taking Its Mask Off While Telling You to Keep Yours On
PJ Media