The town halls: Revealing the wisdom in Palin's resignation 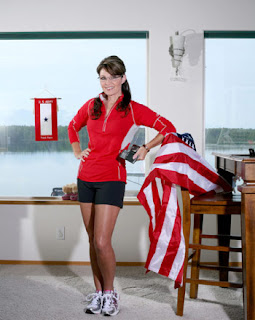 Amid the countrywide smack downs of various public officials in the form of town hall meetings, the wisdom in Palin’s resignation becomes clearer.

While the Democratic majority, drunk with euphoria over the Sotomayor confirmation and the ensuing havoc her activist agenda will wreck with the constitution, sees the crowds as “angry” and “inauthentic,” there is a real truth to the passion and opposition to the Obama agenda that is felt throughout grassroots America.

These “Brooks Brothers” mobs frighten the ivory tower dwelling liberal ruling class because they are more used to sycophantic adulation from the underlings. Seeing the look of fear on Arlen Specter’s face is enough to warm the heart. Not since his days as a prosecutor during the Civil War has the ancient party-hopper faced so much opposition.

The response is akin to Clinton’s 1990s strategy of “nuts and sluts.” Under the “nuts and sluts” defense, Clinton simply swatted away the various credible accusations of sexual harassment and even rape by simply destroying the character of the accuser, thereby raping them a second time with his smiling, nay leering, wife standing by his side while pontificating of a “vast right wing conspiracies” regarding her husband’s sexual addiction.

Obama, Reid and Pelosi want to demonize (and one day imprison if their movement is lucky enough to reach Stalinist proportions) anyone with a question. They do so at their own peril. Gone are the days of reaching out and listening to your constituents. Now, clearly, they are too stupid to know what is good for them, so talking down and talking trash are the order of the day.

The reality is, however, that these crowds are not your garden variety protesters. That is, they have actual jobs and responsibilities, so they can’t just drop their joint and flock to the latest rally at a moment’s notice. The fact that they are coming out in such huge numbers AND around the country is quite telling of the national mood. Also telling is the lack of fainting sycophants in the Obama audiences compared to one year ago. If you remember correctly, last year at this time we were treated to throngs of idiots fainting and crying over Barry. One lady famously told the world through her sobs that she no longer had to worry about paying for her gas or mortgage because Obama was going to take care of that. To re-live that glorious moment click here.

The very fact that chants of “yes, we can” have faded into “angry mobs” has marked quite a change in the electorate, though admittedly, not the type of change Mr. Obama wanted to bring.

While he was expecting to have a schematic of his face sculpture for Mount Rushmore by now, polls find that after 6 months, Obama’s presidency is actually less popular than George W. Bush’s was at the similar time. That is quite a feat given the fact that Bush was an evil war criminal who stole the election and Obama was a quasi-deity “taking a step down” into the presidency.

The problem is that the Democrats seem as out of control in dealing with this health care mess as say, a car driven by a drunk U.S. Senator that is careening off the side of a bridge into the bay. And similarly, as in that case, only the driver will climb out of the sinking car, leaving his mistress to drown to death at the bottom of the bay. In today’s scenario, the Democrats are that mistress and Teddy Kennedy is still the driver.

So, what do these everyday Americans pushing back against socialist policies tell us? That there is real buyer’s remorse going on. They bought the product because of the fancy packaging, but didn’t read the fine print. They want to “change” it back.

How does this tie in to Sarah Palin? Well, first of all, she made resigning cool again. Her nemesis, Senator Kay Bailey Hutchison will be resigning her seat in the fall after something like a century in the senate. Mel Martinez announced today that he will be resigning his senate seat and not returning after the break. Notice, too, that there is no outrage over such resignations. Nobody will question Hutchison’s intelligence or Martinez’s “gravitas” for such a move.

Palin’s resignation was due to frustration over a system that puts power over principle and where status quo is elevated to the top priority. By resigning, but not fading into the background, Sarah Palin can become the embodiment of voter frustration with the governing elites of both parties, who are talking down to America from their thrones in Washington. Her resignation could be a matching of actions and words that is unheard of in political circles these days.

If she plays her cards right, Palin can become the face of the tea parties and the town halls. She can be the Mrs. Smith that will not only bake apple pies, but also go to Washington to drain the swamp.

Unshackled by the commitments and limits of her office, Palin can speak freely for the people.

Palin is also not angry. Despite national rumors of her divorce, Palin simply shrugs it off with a smile and cracks the joke asking, “Divorce him? Have you seen Todd?” as she and Todd stroll the streets of Manhattan planning their next move.

Palin has what Obama does not. It was an essential tool in the arsenal of Reagan. It is the power of humor and optimism. She can field dress the liberal agenda of the Democrats with a smile and a wave. She understands the folks at the tea parties and the town halls because she is one of them. They are not angry. They are protective of their country and willing to stand up to the powers that be if that means defending the founder’s vision of America against an extreme European-style socialist makeover.

In that sense, Palin’s resignation will allow her the ability to walk the walk with the grass roots folks. It will allow her to get her hands dirty in the fight against Obama’s America Version 2.0. In light of this reality, her decision makes more sense now than ever.
UPDATE: Sarah Palin has done just that! In her Facebook post today, Palin labeled Obama’s health care plan “evil” and said the following:

The Democrats promise that a government health care system will reduce the cost of health care, but as the economist Thomas Sowell has pointed out, government health care will not reduce the cost; it will simply refuse to pay the cost. And who will suffer the most when they ration care? The sick, the elderly, and the disabled, of course. The America I know and love is not one in which my parents or my baby with Down Syndrome will have to stand in front of Obama’s “death panel” so his bureaucrats can decide, based on a subjective judgment of their “level of productivity in society,” whether they are worthy of health care. Such a system is downright evil.

Palin goes on to say that, “Human rights and human dignity must be at the center of any health care discussion.”

She concludes by reminding us that government programs don’t usually go away once they are started:

Nationalizing our health care system is a point of no return for government interference in the lives of its citizens. If we go down this path, there will be no turning back.

Palin bluntly takes on Obama’s plan in a way that no other politician is willing to do.

FL Sheriff Has Some Advice for the 'Millions' of People Moving to the State on How to Vote
Townhall
Norfolk Police Department fires officer who was outed for donating $25 to defense fund for Kyle Rittenhouse
Twitchy
WARNING: Bodycam Video of Columbus Police Officer Shows Shots Fired To Prevent Stabbing of Another Person
Redstate
New Dispatch From The Brady White Files: Why Risk Your Life if You're A Cop?
PJ Media