But Did He Charge Them For The Beer? 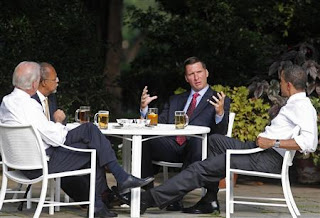 Want to get reservations at that new restaurant, The White House? Well, unless you are an employee of ACORN or a liberal Democrat, you can expect to have to wait a long time.

President Obama had his White House staff charge folks for their lunches while meeting with the President.

This is a return to the policies enacted under Clinton when he would charge friends, family, and supporters for a night stay in the Lincoln bedroom.

Now Obama, like Clinton’s stint in the hospitality industry, has decided to make the White House a for-profit eating establishment.

Well, probably only in certain cases. The guests in question were, after all, evil CEOs that need to be shown their place. One would have to imagine that union thugs, MoveOn.org types, ACORN, and other Obama cronies would not be charged for their lunch. Only when dining with the evil CEOs does Obama need to worry about appearances. It is necessary to help “spread the wealth around” and make sure the money gets to the “right people.”

So now a question must be posed about Obama’s Beerfest 2009 summit with the “stupid racist cop” and the black professor. Did the President and Vice President charge their guests for the beer or were they “on the house” because of the ridiculously racist way in which Obama handled the situation?

I’m sure the mainstream media will get right on that one.