The Wise Latina Lies Her Face Off 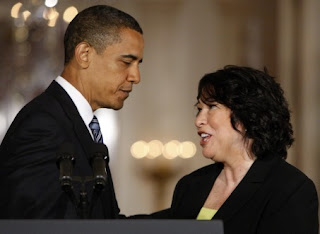 Judge Sonia Sotomayor has proven to be a chameleon. In front of the Senate, you’d think that milady had been nominated by Presidents Reagan or Bush. According to her shamefully dishonest statements before the United States Senate, you would have to conclude that Sonia Sotomayor is a strict constructionist when it comes to her role in the court.

Her record and a lifetime of past statements beg to differ.

Sotomayor’s “wise Latina” quip originally appearing in a speech she gave in 2001 has been repeatedly no less than 6 times according to Senator Sessions, and it bears repeating as Senator Sessions did today:

“I would hope that a wise Latina woman, with the richness of her experiences, would more often than not reach a better conclusion than a white male who hasn’t lived that life.”

Ever the faithful adherent to the law, Sotomayor also has been on record in 2001 as stating that:

“Personal experiences affect the facts that judges choose to see.”

“Whether born from experience or inherent physiological or cultural differences our gender and national origins may and will make a difference in our judging.”

She also famously quipped at Duke University Law School in 2005 that the court of appeals is “where policy is made.” Judge Sotomayor, of course, giggled and acted all coy about how she “shouldn’t be saying it” but nonetheless blurted this statement out in front of rolling cameras and a cabal of sycophantic law students just the same.

Of course, today it is completely different. Today, Sotomayor is pretending to respect the rule of law. Senator Patrick “Gurgling Swamp Monster” Leahy tried to invalidate the above Sotomayor quotes by saying:

Thank you. Obviously, we can talk about your speeches, but, ultimately, we determine how you act as a judge and how you make decisions. I will put into the record the American Bar Association, which has unanimously — unanimously — given you their highest rating.

Yet, wasn’t it just last year that we were told that we should elect B. O. as our president on the strength of his speeches alone? A year later and speeches mean nothing. Hmm. Maybe the apparent suicide of TOTUS has so grieved the Democrats that they can no longer praise another speech again, but I digress.

Sotomayor today claims that her feelings and prejudices shouldn’t and don’t influence her outcomes, yet just yesterday as Senator Sessions pointed out, she was all:

“I willingly accept that we who judge must not deny the differences resulting from experience and heritage, but continuously to judge when those opinions, sympathies and prejudices are appropriate.”

Today, she’s either confused or dishonest (both admirable and sought-after qualities in liberal circles):

“I was talking about the very important goal of the justice system is to ensure that the personal biases and prejudices of a judge do not influence the outcome of a case.
What I was talking about was the obligation of judges to examine what they’re feeling as they’re adjudicating a case and to ensure that that’s not influencing the outcome. Life experiences have to influence you. We’re not robots to listen to evidence and don’t have feelings. We have to recognize those feelings and put them aside.”

In language that failed presidential hopeful John Kerry would understand, she was for using biases and feelings such as empathy before she was against it.

In the face of countless quotes to the contrary, today Sotomayor proclaims her solid fidelity to the law. She even makes the outrageous claim that her record clearly indicates this:

I believe my record of 17 years demonstrates fully that I do believe that law — that judges must apply the law and not make the law. Whether I’ve agreed with a party or not, found them sympathetic or not, in every case I have decided, I have done what the law requires.

In this celebrated record that clearly demonstrates her fierce fidelity to the law and renunciation of activism, Sotomayor has quite a few gems. For more information on them, visit The Heritage Foundation. Among them:

Maloney V. Cuomo, where Judge Sotomayor ruled against the Constitution in declaring that the Second Amendment right to bear arms was not a “fundamental right” thereby allowing local, state and federal governments to outright ban the right to bear arms completely. According to Sotomayor’s terse ruling in the case, under the “due process clause” of the Fourteenth Amendment, the “right to bear arms” is simply not a fundamental right. Instead of fervently using the law to defend her position on the case, Sotomayor and her chums simply declare their conclusion without any explanation or proof. In other words, there is nothing in the law that they anchor their decision to. It is a decision reached in spite of the law and without any attempt to justify or explain it.

And of course, there is the recently overturned by her soon-to-be colleagues case of Ricci v. DeStefano. The case, dealing with white firemen discriminated against by New Haven all in the hopes of maintaining diversity through hiring lesser-qualified minorities is no doubt the work of a “wise Latina” and not the law itself. It is important to note that all nine justices on the Supreme Court (including liberal dinosaur Justice John Paul Stevens) rejected Sotomayor’s applied standard. Once again, Sotomayor’s explanation of her wise Latina decision, again decided without any basis in law, was terse and without explanation.

And finally, returning to the now unimportant speeches given by Sotomayor, we have her repeated support of using foreign law to interpret American law. Of course, in a semantic exercise not seen since the days of Bill Clinton’s fancy tap-dance over the definition of the pithy word “is,” Sotomayor points out that she merely says we should “consider” foreign laws in interpreting our own, not actually “use” it. She would never do that. She does not have inappropriate relations with those foreign laws. Her heart beats for the law of the United States of America alone. It must be that “vast right-wing conspiracy” that gives the impression of her improper relationships with foreign laws.

The problem with Sotomayor is two-fold. Not only is she clearly an activist judge, but she’s also a “liar, liar pants on fire.” To spend your entire wise Latina career making judgements based primarily on your own biases and prejudices with little to no foundational exposition to even feign a fidelity to the law and then to ramble on and on to the Senate about how your record clearly does adhere to the law alone is downright sinister. Judge Sotomayor is a judicial activist. This (and her gender and ethnicity) is why Barack Obama chose her for the court. She shouldn’t run from that. It is the reality. There is no need to hide this fact given the plethora of speeches in which Obama has lectured us about judges needing “empathy” and a desire to adapt our laws to a changing culture. There is also the obvious fact that with the arrival of the deranged comedian from Minnesota to the Senate, the activist-loving liberal “Constitutional play-doh” crowd has at least 60 votes. They also likely have the sycophantic crones like Olympia Snowe and Susan Collins itching to join their majority. So, Judge Sotomayor, be who you are. Embrace your socialist activist. School us dumb “bitter” Americans clinging to God and guns about the “living and breathing” nature of the Constitution that only a wise Latina like yourself can bring out.

The recent suicide of TOTUS and this blatant and shamelessly dishonest presentation of Sotomayor’s judicial philosophy further proves the fact that America is a right of center nation. Like Obama’s constant droning about “not wanting to get into the car industry” right before taking over the car industry and “not wanting to take over health care” as he seeks to take over health care, Sotomayor seems to think that she needs to deceive the American people from her true intentions. Like the ruthlessly power-hungry Shakespearean couple of Macbeth and Lady Macbeth, these “tyrants” know that they must “look like the innocent flower, but be the serpent under’t.” No word yet on whether or not Obama and Sotomayor have secretly been meeting with witches who tell them the future as well or if Banquo’s ghost has frightened them out of their wits.

So, we can take heart in the fact that the American people are clearly on the side of Constitutional fidelity, as the Administration of “all things to all people” has demonstrated through their confirmation charade. We, should also, however, be weeping for the horrendous damage that the activists will visit upon this nation through their deception.

“Our judges are as honest as other men and not more so. They have with others the same passions for party, for power, and the privilege of their corps. Their maxim is boni judicis est ampliare jurisdictionem [good justice is broad jurisdiction], and their power the more dangerous as they are in office for life and not responsible, as the other functionaries are, to the elective control. The Constitution has erected no such single tribunal, knowing that to whatever hands confided, with the corruptions of time and party, its members would become despots. It has more wisely made all the departments co-equal and co-sovereign within themselves.” –Thomas Jefferson to William C. Jarvis, 1820

To resolve this current threat to our judicial system, however, the power is in our hands. As Jefferson also remarked in response to the Chief Justice’s claims that there must be a final arbiter somewhere, “The ultimate arbiter is the people of the Union…” It is truly only the people of this great nation who have the power to protect and defend the Constitution of the United States. Let’s get to it then before Saul Alinsky’s radicals make America into something that our Founding Fathers would have rather fled from than bled for.