The Real Story of Ghana 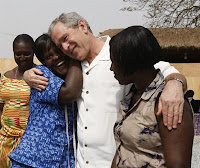 So, Africa’s alleged favorite son, Barack Hussein Obama, the child of avowed socialist activist Barack Obama Sr. of Kenya, returned to Africa on an official state visit. Obama Sr was famous for exactly three things: promoting socialism, driving drunk, and fathering a plethora of illegitimate children that he quickly abandoned. For more on that, read the book “The Obama Nation.”

So, as I was saying, President Obama returned to Ghana where he did give a decent speech. Did you know, however, that the self-proclaimed “Citizen of the World” was barely noticed by the people of Ghana?

It was indeed, a far cry from the scores of socialist Europeans who mobbed to see the king of pop culture and image last summer. Chanting his name like a rock star, they fainted, screamed and wished that Obama could be their personal socialist dictator. Someday, my friends, some day. He has to destroy America before he can fully enact the Green Movement’s desired One World Government that he no doubt will be itching to be in charge of.

Anyway, on this trip, he arrive to much less fanfare. In fact, if you search real hard on Google, you will find that there are some real journalists left out there that covered this little known fact.

So, while the great scripted one read intently from his TelePrompTer in the African heat, there were very few people that came to see him. Do you suppose that he threw a fit upon returning to Air Force One? Surely, this was not the image that he wanted going out to all the world. Rejected in the land of his ancestors? Not the Messiah?!?

Thankfully for us, the media is covering Obama’s tracks on this one. Some stories have covered the brave nature of his speech. It indeed did chide some of the corrupt nations of Africa for starving their people, stealing humanitarian aid and engaging in various genocidal acts. That was something worthy of praise.

Of course, those in glass houses should throw stones buddy. Let’s see, the Obama Administration has the corruption down pat. Ditto for the starving their own people. Okay, so they aren’t actually starving people, but they are enacting stimulus after stimulus, the sole purpose of which is to slow down economic recovery and destroy the free market. Once that is accomplished, we can become a socialist utopia of people dependent upon the government for everything. Then of course, we will have to kiss the ring of Obama even more than we already do! Obama and his buddies don’t want the recovery to happen too soon! They need to maximize the timing for political benefit. They have mid-term elections next year. They also need to make sure that more and more people get discouraged from capitalism and become more socialist. Maybe after they embrace a new America (and perhaps silence “them Jews”) Rev. Wright and Bill Ayers will be able to come over and play at the White House (which Wright will no doubt rename the “Black House” due to his hatred of the white race.)

The glaring contrast between the chirping crickets that greeted Obama and the massive throngs of people that greeted President Bush last year is striking. President Bush led the way in confronting the brutal dictatorships and attacking head-on the poverty and disease running rampant in Africa. In fact, if you were to ask the people in many African nations their opinions of George W. Bush, you would probably be shocked. If you were a mainstream media sycophant, you would probably drop dead from having your head explode in a fit of rage.

The reality is that President Bush showed the world the compassion and the blessing of America’s freedoms. His leadership in Africa was one of the many stories of success during his tenure that the media somehow missed.

The real story of the President’s Ghana trip was the glaring disconnect between reality and the news that is reported in the mainstream media. Where we see Obama being virtually ignored by his father’s continent and giving an albeit brave speech to the camels and rattle snakes, they see a noble story of a man bringing his daughters to learn the history of their people and bravely challenging the leaders of Africa amid throngs of people. It just goes to show you that propaganda is alive and well in America’s media today.

Gee. if these hard-working nose-to-the-grindstone no-nonsense salt of the earth types that run the mainstream media could miss a story like this, what else do you suppose they lie to us about?