Governor Palin: Too Big To Deal With Fishing Licenses & Just The Right Size To Lead A Movement 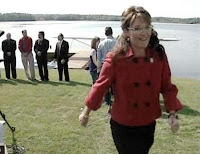 Side note: I do love that television show HOUSE. That Dr. Greg House is so crazy. Wait, he’s also brilliant. Well, I guess brilliant people do sometime come across as crazy and do unconventional things. I guess that’s how they achieve greatness.  My point, is not to compare Palin to a drug-addicted jerk, but rather illustrate that sometimes brilliant people make choices in their career that others wouldn’t have.  That Einstein is another one, dropping out of school and all couldn’t have been a good move for a career in science.  Palin’s resignation may turn out to be just another seemingly crazy move by someone who is brilliant in what they do.

Additional Disclaimer: I always have been and will continue to be a huge fan of Governor Sarah Palin.

Sarah Palin’s announcement of not just refusing to run for re-election but also resigning has taken the political world by storm. I have remained largely silent on the issue because I just didn’t know what to make of it. I still don’t. I do, however, after a few days of reflection and reading the best political thoughts out there, have a clearer idea of what I think it means.

First of all, none of us really knows for sure what Sarah Palin plans to do. We know only what she has told us, which was:

A. She isn’t seeking re-election.
B. She decided that being a lame duck Governor in the cross-hairs of the liberal attack machine was not interesting enough to warrant her time.
C. She seems to plan some sort of major role on the national scene.

We also have the narratives that the media elites have broken her choice down into:

A. She is protecting her family and quitting elected politics (NBCs fantasy)
B. There is some scandal looming (the one already being pushed by liberals was ruled out by the FBI itself.)
C. She is running for president.
D. She wants to write books, host a show of her own and give speeches.

Now, selection A doesn’t seem to make sense with the comments that the Governor has made. Sarah Palin has been very clear that she is “moving in a new direction” and that she intends to fight for conservative ideas on a national scale. That would imply that she isn’t going to disappear into nothingness. That would mean her family will still be vulnerable to attack by the vitriol of the left. Sarah Palin didn’t just quit to protect her family. That may have been a factor, but it wasn’t the only factor.

As for the scandal looming, let’s be serious, there has been an army of dirt-digging liberal trolls infesting the landscape of Alaska since last August. If there was anything serious still out there, it would have been found and reported by now. Again, Palin’s own words tend to disprove this one. If she were resigning to avoid a scandal, she wouldn’t continue to be so forceful in defense of herself and in promising some big higher calling. She would simply go away.

That leaves only C & D. I think Palin’s plan is a combination of both. What does her action say?

Governor Palin only serving 2 1/2 years of her term will hurt her when she chooses to run for president. People will say that she lacks experience. People will say that she is a quitter. The charge of inexperience, however, is not one that would have been solved by finishing her term. She would still have been told that she was only governor for 4 years and that’s not enough experience. The quitting might be harder to overcome, but it can still be done if she uses that extra year and a half effectively.

Experience is huge for a president. It is, however, not unprecedented that the nation elect people without a large amount of political experience. Abraham Lincoln, for example, was a one-term congressman for being elected President. After his defeat for re-election to congress, Lincoln gave speeches and toured around. Most people agree that he did a decent job as President despite his lack of experience.

Additionally, Teddy Roosevelt’s only elected political experience before entering the White House was 2 years as governor of New York before his brief 6 month stint as Vice President. He also didn’t do too poorly.

Of course liberal’s wildest fantasies are being fulfilled by President Barack Hussein Obama, who you might remember basically left the senate a mere 170 or so days in the job. Sure, he still collected a check as an U.S. Senator, but he failed to show up for work because he was busy convincing the nation that he was “the one.”

So that raises the question of who will raise this charge against Palin? Should Obama do it, she can and will respond by asking him how he managed to survive with his similarly minuscule elected experience. Perhaps it will be raised by Mitt Romney during the primary? I’m sure his vast 1 1/2 years of extra elected experience will make a difference. As for the charge of betraying her electorate, I’m sure the people of Massachusetts will have something to say about the man they elected as a moderate Republican who morphed mid-term into a conservative (except on health care where he instituted quasi-socialized medicine.) I guess Mike Huckabee could raise the experience factor, but then again, he had his own problems with the conservatives in 2008 and they are not likely to go away. Tim Pawlenty might raise the issue, but then again the people he is speaking to will be asleep before he gets to his point.

Experience is important, but it isn’t the only thing. It can get you elected President but it isn’t enough to guarantee a successful presidency. To be president, one has to be able to lead boldly. Take risks. Challenge the status quo. Especially in a day and age where all politicians, Republican and Democrat, have sold their souls to the corruption and the ever-growing national government behemoth.

Governor Palin’s move is unconventional. It is risky. It may be her undoing and a sign of insanity. It also may be, however, a stroke of brilliance. A bold political move that liberates her to be the leading conservative voice against Barack Obama. You can’t apply conventional rules and standards to a politician who continually succeeds by defying them.

Palin represents the last of the true citizen politicians. She wasn’t born into money and power. She didn’t get into office because of who her father was or who she was married to. She didn’t come from a wealthy family that bought an office for her. She didn’t come from a corporate background that allowed businesses to buy her office and her political soul. She started at the grassroots with nothing and become a national star. Without the office of governor, Sarah Palin will really become one of us, those extremely frustrated with the government and ready for a change. As an ordinary barbarian, Governor Palin can travel the country raising massive amounts of money and drawing huge crowds. She can begin to harness this grassroots movement that has started with the tea parties and build it into a real wave of change in a way that Romney’s pizza parlors full of 100 or so people can’t do.

As for the governorship itself, Ann Coulter said it best:

As Palin said, God bless people who run for political office, but – and she didn’t say this part – she’s too big to be a lame-duck governor stuck dealing with fishing licenses in Anchorage right now.

She’ll be much bigger now and can play on the national stage without constantly setting off state ethics investigations by loons, parasites and liberals. None of this applied to McCain or Kerry – both of whom went back to the Senate – because their national campaigns diminished them. Palin’s national campaign made her a major star. As she said, she’s not retreating, she’s advancing in another direction.

Instead of dealing with fishing licenses in Alaska, Palin can now do what the elites have been telling her to do: she can get up to speed on issues, and engage in serious debate on those national issues for the next 3 years.

Imagine if Palin uses her star power to not only stand in opposition to Obama, but also lead the GOP to victory in 2010. That combined with a bestselling book or two, the onslaught of media appearances and speeches that she will give and the unprecedented media attention that she inevitably will attract in doing so, and you have a new head of the conservative movement and the Republican party.

Mitt Romney and his muckraking crew of former McCain aides may find at that point that the Governor has created such a tsunami of grassroots political support that even his establishment support will not be enough to overcome her.

Her move to resign suggested the type of president she would seek to be. One that is willing to overturn long-standing traditions and expectations to radically reform Washington. She will become the anti-Obama.

When conservative leaders who are plugged into the grassroots folks like Rush Limbaugh and Mark Levin tell me that Palin’s resignation does nothing to diminish her credibility to run for president and seem genuinely excited about her future, that tells me all that I need to know. As Rush pointed out, he is a shining example of how not following the same old rules that everyone else follows can be a good thing!

There is indeed something larger here than meets the eye. A massive conservative movement is coming and it just might take out the media’s socialist messiah. Whether it lands Sarah Palin in the White House in 2012 or beyond, I cannot say. I can say that this woman may be just the breath of fresh air that conservatives, and the country needs to help America find it’s way back to the path of freedom and liberty.

What They Say Is an Attack On the LGBT Community Isn't an Attack, It's a Defense

So, That's Why Alec Baldwin Thought He Could Point a Prop Gun at People and Pull the Trigger
Townhall
Spot the FED! Glenn Greenwald highlights 'mysterious not-yet-indicted Ray Epps' who was caught on video inciting Capitol breach on Jan 6
Twitchy
A Big Electoral Shift Shows That Democrats Have Overplayed Their Hand Going Into 2022
Redstate
Ugly: He Urged Jan. 6 Protesters to Attack the Capitol, but Is This Instigator Really a 'Fed! Fed! Fed!'?
PJ Media