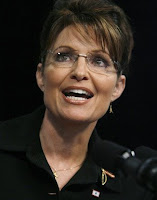 What kind of conservative is Sarah Palin?

Rather than curling up in a fetal position weeping because the mainstream (see also socialist propaganda machine) media doesn’t like her, Governor Palin has consistently led on conservative issues since losing in November as the running mate to John “Maverick” McCain.

She does so on both the political stage and in her personal life.

It is a lesson that out-of-touch leaders in the Republican party would do well to learn.

Governor Palin doesn’t shrink away from challenging the Obama administration on everything from cap and trade to foreign policy, to social conservtatism of defending the right to life to even finding time in her busy schedule to visit our troops overseas and show her support.

Of course, to listen to the folks in the media, you would expect Sarah Palin to be sitting at home drooling on herself and trying hooked on phonics to learn how to read.

While other “leaders” in the party like Mark Sanford and John Ensign have failed miserably in massive failures of moral judgment, Sarah Palin has walked the walk. She has defended the unborn, the special needs community, and young women against a culture of death and sexual degredation. She has done so at great risk to her own reputation among the in crowds. She chose, however, to do right and give the consequences to God instead of throwing away her morals to feel good in the moment as other conservative leaders of late.

While other leaders find it difficult to challenge Obama’s policies, Governor Palin has consistently done so with class and with a direct appeal to the American people. Her commonsense optimistic approach to conservatism is infectious and just the type of antedote to the hypnosis so many Americans find themselves under by the socialist incantations of Obama and his minions. She confronts Obama’s policies from cap and trade to the stimulus disaster, to national defense with ease and with an approach that everyday Americans can listen to without having their eyes glaze over in boredom.

She also gets high marks from the Alaska National Guard for her role as Alaska’s Commander-in-Chief. She has shown herself to be a very hands on Commander-in-chief attending all of the deployment ceremonies and now visiting for a second time the soldiers stationed in the middle east.

Yet, still there are those who underestimate Palin or buy into the media spin. Governor Palin still stands as the only conservative Republican with enough charisma and conviction to win Americans to our cause. She has demonstrated on economics, on social issues, and on national security that she’s one of us. She represents the future of the GOP (2012 or beyond) and a beacon of hope to a nation sinking into the abyss of socialism.