Why I Won't Defend Mark Sanford 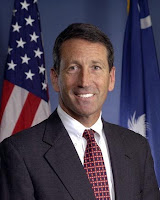 Pray for, yes. Defend, no.
I was just starting to get to know Governor Mark Sanford in recent weeks with his refusal to take the stimulus funds and his higher than normal national profile as he began to test the waters for 2012. I have to say that most of what I saw impressed me.

All of that, however, was undone by the events of the past week. I will not defend Mark Sanford against a scandal of his own doing.

It brings to mind the famous freak-out scene in Shakespeare’s Macbeth when Macbeth, riddled with guilt, has been screaming at the ghost of Banquo in front of his dinner guests, consisting of a who’s who of Scotland (except of course, for Macduff who hates his guts.) None of the other people present see this bloody apparition, however, so in their eyes he “looks but upon a stool.” Lady Macbeth tries to cover up for him by telling the crowd that this “condition” of freaking out randomly for no reason is an ailment that Macbeth has had since childhood.

Macbeth himself says, “I have a strange infirmity, which is nothing To those that know me.”

It is a classic “pay-no-attention” “nothing to see here folks” response to a clear loss of control by their leader.

Those who are defending the actions of Governor Mark Sanford are engaging in their own cover-up now akin to this Shakespearean example.

He violated the most sacred vow he will take by betraying his wife. He did so while serving as a prominent GOP governor, and a potential 2012 presidential candidate. The level of hypocrisy, arrogance and dishonesty in pursuing such a line of behavior is on a level with Bill Clinton in the 1990s.

The fact that the Governor used state trips to conduct his affair, and virtually abandoned his responsibilities, leaving his state without a governor for days on end so that he could canoodle with a mistress in Argentina reveal the worst kind of narcissism and poor judgement in today’s leadership.

Understand too, that like the classic tragic hero, Governor Sanford’s fall from grace is of his own choosing. Tragic heroes have a free will to choose to do right or wrong. They always choose to do wrong, but in the end their undoing comes at their own hands. They can’t point to anyone else as being to blame. This scandal is a totally self-made debacle for Sanford.

Some are calling for Sanford to resign as governor. I will leave that decision to the people of South Carolina. Misusing state funds and abandoning his state duties for days at a time seem pretty serious failures in his executive responsibilities. Whether they rise to a level of impeachment is a matter for South Carolinians. It should be noted that Bill Clinton was impeached for less, however. At least he was still conducting his duties as president while being serviced by Ms. Lewinsky.

The level of narcissism needed to conduct that affair while lying about his location and considering a presidential campaign is shockingly high. Sanford not only tossed away his own career and integrity, but also that of his party who was looking to him in a time of crisis.

This is the same reason that I can never support Newt Gingrich for president. I can appreciate both men as still having something to contribute to the national dialogue, but I also do not intend to lower my standards of what makes a good president. In the 1990s I was disgusted by Bill Clinton’s behavior, and I can’t excuse the same behavior in Republicans just because I agree with them politically. In Newt’s case, cheating on his wife with an intern while leading the GOP during a time when the Democratic president is being impeached for lying about cheating on his wife with an intern was the height of hypocrisy.

These brazen actions on the part of Gingrich and Sanford speak to their personal moral character. They lack the judgment to lead the nation. If Mark Sanford has to run off to the Amazon for a little extra-marital loving just to deal with the tough job of South Carolina Governor, he’s clearly not up to the task of president.

Some will argue in the coming days and weeks that Sanford may be able to rehabilitate himself before 2012. No thank you. I do hope he does put his life back in order and makes amends with his betrayed family. I do not, however, think than an apology after blatantly getting caught with his pants down, so to speak, makes him a good leader. The presidential ship has sailed on Mark Sanford. We should look to men and women who speak to our better nature rather than those who reveal our worst failures.

He is now just another man of promise who sold his soul for power, lust and greed. He is now a poster boy for what’s wrong with politics right now. We need genuine leadership who will speak truth to power and not sell their soul for their own personal gratification. The Washington swamp is full of this soiled type of corrupt politician. We need genuine leaders with integrity if we are ever to drain that socialist swamp and return to the beacon of freedom that we have always been.

Please don’t tell me that I should defend Mark Sanford against his own poor choices. I will pray for the Sanford family, but I will not make excuses for a man that walks out on both his wife and his job and uses state funds to do it. Governor Sanford is the only one who can right this wrong and that will take time. There should be, however, consequences to poor behavior, not rewards. Perhaps he should go hike the Appalachian trail after all. A little fresh air might do him some good.

'Is This a Joke?': What the State Department Is Focused on Today Amid Multiple Crises
Townhall
Condoleezza Rice talks some sense into the hosts of 'The View' regarding critical race theory in schools
Twitchy
Joe Biden Has a Senile Moment and Makes a Promise Sure to Tick Americans Off
Redstate
They're at It Again: The Left Is Using Its California Playbook in Virginia
PJ Media