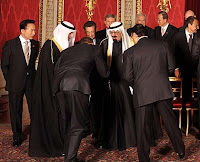 From the Bible, Luke 6:49: “But the one who hears my words and does not put them into practice is like a man who built a house on the ground without a foundation. The moment the torrent struck that house, it collapsed and its destruction was complete.”

President Barack Obama continues to confirm all things radical about himself with each passing day. Yet, he also continues to hide the deep and frightening truth of who he really is behind his personality in a celebrity-obsessed culture oblivious to their own imminent destruction.

During the campaign much was made by conservatives over the associations that Obama has made and maintained throughout his career. We were told that our concerns were foolish and that the likes of Saul Alinsky, Rev. Wright, Bill Ayers, ACORN, et al meant nothing. Yet barely over 2 months into his presidency, Obama’s deeply held anti-American and anti-Christian beliefs are finding ways to bubble up to the surface.

First, we have to understand that the foundation of our entire government and legal system is deeply rooted in the Judeo-Christian worldview and values. The founders and many of those who paid for this great nation with their deep personal sacrifices held to these beliefs despite recent attempts to re-cast them as anti-Christian pagans.

The Bible verse at the top of this blog speaks to the seriousness of comments like the following coming from President Barack HUSSEIN Obama:

In this, he argues against President George Washington, who argued in his farewell address:

“Of all the dispositions and habits which lead to political prosperity, Religion and morality are indispensable supports. In vain would that man claim the tribute of Patriotism who should labour to subvert these great Pillars of human happiness, these firmest props of the duties of Men and citizens. The mere Politician, equally with the pious man ought to respect and to cherish them. A volume could not trace all their connections with private and public felicity.”

“ It is impossible to rightly govern the world without God and Bible.”

And also against President John Adams:

“Our Constitution was made only for a moral and religious people. It is wholly inadequate to the government of any other.”

And the wise sage Benjamin Franklin:

“ God governs in the affairs of man. And if a sparrow cannot fall to the ground without his notice, is it probable that an empire can rise without His aid? We have been assured in the Sacred Writings that except the Lord build the house, they labor in vain that build it. I firmly believe this. I also believe that, without His concurring aid, we shall succeed in this political building no better than the builders of Babel.”

And against President James Madison:

“We have staked the whole future of American civilization, not upon the power of government, far from it. We’ve staked the future of all our political institutions upon our capacity…to sustain ourselves according to the Ten Commandments of God.”

Presidents Washington, Adams & Madison and Founding Father Benjamin Franklin rightly understood that people trying just to be “good for goodness’ sake” in our government would not succeed. They understood that a Biblical worldview and moral code, being the basis for the American Constitutional Government, was essential for the success of this nation in both the private lives of its citizens and in the practice of its government.

So, when President Obama attempts to re-cast the nation as a secular nation without regard to the foundation upon which our nation built our laws, social views, and indeed governing philosophy, he puts massive cracks in the foundation of America. His attempt to remove any Christian influence over our nation’s government and policies is a chilling move to take down this nation. As the Biblical verse suggests, the foundation of anything, whether it be a building or a nation, is essential to its very survival. Obama’s mission in life is to radically change that foundation. He believes it is his goal to re-make America into a nation that he wants it to be. This is the “Change” he came to bring–the total destruction of Christian America and the new secularized socialist America that will be created in its place.

In many ways, this should not be surprising. Obama’s associations, mentors, and past political positions have revealed him to be a staunch socialist on most things. The freqent comments from both Obamas and their friends and advisors on their negative views of America are not to be taken lightly. His Muslim family influence growing up and increasingly obvious loyalty to all things Islamic are barely hidden behind the rouse that he is a “Christian” despite not adhering to any of the tenets of Christianity and not ever referencing said faith. His mistaken reference to his “Muslim faith” in an interview with ABC’s George Stephanopoulos and his recent obsession with reaching out to Muslims seem to suggest that this “sheep” is in fact a “goat.” Make no mistake, Obama is here to destroy America as we know it and replace it with a secular socialist state.

The removal of Christian influence is essential to his success. This is primarily due to one of the central tenets of the Christian faith–that all men are created equal and are equally sinful before God. The Bible teaches that not one person can achieve righteousness apart from Christ. Such a belief serves as a foundational support for our style of government in that it understands that anyone with too much power can become a tyrant. All men are capable of doing bad things on their own, and as such, a Christian view of the world would insist on putting limitations on the power of government. People, even well-intentioned people, will miss the mark and fall short of what they need to do. As a result, no one person or group of people should be entrusted with so massive a power.

If Obama can succeed in fully removing this stumbling block to his power from the majority of the American people, he can convince them that the government rightfully deserves an ever-increasing control over the daily lives of people. President Obama and his secular allies in congress will continue to grow government and encroach on the liberties of the American people until this nation resembles something out of the annals of the USSR or the People’s Republic of China.

Consider some of the following that Obama has done or proposed since taking office:

Dismantling the missle defense of our country while at the same time approving of Iran obtaining nuclear technology. (After all, his advisor was instrumental in giving Iran’s crackpot dictator the stage at Columbia University and Mr. Obama has suggested he wants to meet without pre-conditions with the psycho.)

Bowing to the King of Saudi Arabia, demonstrating the submission he personally feels to the powerful Muslims of the world. (Although he claims that bending at the waist in front of the potentate was simply reaching down to “shake the hand” the shorter king…and countless dimwits will chant “Yes We Can” and believe this nonsense.)

Refusing to commit to attending the 65th anniversary of D-Day at the G20 for fear of offending the Germans.

Refusing to call Terrorist Attacks, instead opting for the “man-made disasters” label that will not offend terrorists.

Refusing to call it a War on Terror, instead opting for the “oversea contingency operations” that make Al-queda and the Taliban feel better about themselves.

Spending as much time as possible putting America down on foreign soil, by referring to us as “arrogant” and doing everything in his power to submit America’s interests to those of the Muslim world and other socialist nations.

In short, Mr. Obama has been shouting from the rooftops about the evils of America while downplaying or downright ignoring the immense history of America’s leadership and protection of freedom at home and abroad. He lacks the ability to discern good from evil and makes no distinction between terrorists and American citizens, between the evil of the Nazi past and the heroism of the allied powers, between those who obey the law and those who break it (see also his tax-evading nominees).

This is the worst kind of leadership. It is precisely this type of leadership that will remove the sound foundation of this great nation and remove America from the world stage forever. It is precisely this kind of leadership that will strip Americans of their rights with a smile, while growing the government monstrosity into the next great threat against mankind. Make no mistake, Barack Obama is an extremist set on destroying the foundations of America and creating a new Obama-style socialist nation that will declare open season to Muslim terrorists while silencing the Christian community and diminishing its importance in society. America is not immune to the lessons of history and should America continue down this path, she will fall like so many before her.

This column may sound like the hysterical rantings of a paranoid conservative. I would suggest that it isn’t paranoia when the threat is real. We are living through another American revolution where our very way of life is under assault from no less than the White House. This great nation will not stand should Mr. Obama succeed in shattering the foundation that has held firm against communism, fascism, tyranny and terrorism. Friends, the hour of our destruction is upon us. It is time to stand against the radical Obama agenda as though our future depends on it–because it does.