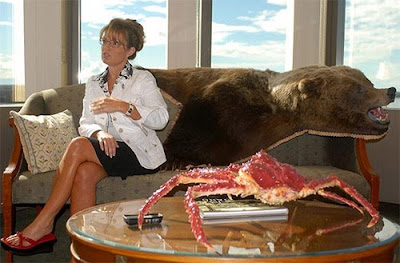 UPDATE: Demonstrating that she is a chief executive who intends to stand on her own two feet and not allow herself to be slowly lulled to sleep in the arms of the Obama-mega government, Governor Sarah Palin announced today that she will be rejecting over 500 million dollars from the Obama stimulus plan. Governor Palin will accept funding for capital projects for various infrastructure needs, but has rejected monies with “strings attached” by the federal government.

Some awesome Palin quotes from the release:

“Will we chart our own course or will Washington do it for us?”

“Simply expanding state government under this federal stimulus package creates an unrealistic expectation that the state will continue these programs when the federal funds are no longer available,” said Governor Palin. “Our nation is already over $11 trillion in debt; we can’t keep digging this hole.”

A link about the details including a video of her announcement can be found here.

I had a discussion with a friend of mine who is also interested in conservative politics. He mentioned that Sarah Palin’s chances in 2012 were non-existent because the media had succeeded in defining her as a dunce.

I have read similar comments from various commentators (most of them liberal) and many of them elites on both sides of the aisle. Consider me in agreement with Newt Gingrich on this one.

When you consider the prospect of a Governor Palin candidacy in 2012, you need to look at the totality of her record and performance before making a judgment. You also need to look at similar moments in American history.

Most people who consider Palin over with will point to her interviews with Katie Couric and Charles Gibson. There can be no mistake that Governor Palin looked ill at ease and wasn’t fully prepared to answer some of those questions, so concerns raised on those appearances are justified. They were, however, edited interviews given at a time when Palin was being told not to be herself and to only regurgitate things that handlers who didn’t like her much were feeding her. That kind of pressure and restrictive environment would take the best communicators among us and neuter them. A large part of successful communication is authenticity and connection to who you really are. In these instances, Palin was told to build her house on the sand instead of the firm foundation of this bedrock truth in communication 101. She labored in vain to be someone that she wasn’t and it showed.

To be fair, however, it wasn’t her campaign and her place was to follow the lead of the nominee and his campaign staff. A Palin candidacy would be free to call the shots. Those moments during the campaign where Palin “went rogue” were more telling of who she was and what she would do. In those moments, Palin emerged as a tough campaigner that was willing to go to battle for what she believed. In those final weeks leading up to the election, a newly liberated Governor Palin began exuding more of the charm and confidence that marked her initial outings and her career in Alaskan politics.

Referring back to those initial outings, take a moment to consider Governor Palin’s speech in Dayton, Ohio on the day that she was announced as John McCain’s running mate. My wife, who had only heard of Palin before that morning because of my political blogging on her behalf during July and early August, was instantly impressed. She was drawn both to her speech and her stage presence. Shortly after the speech ended, my cell buzzed with text messages from various friends mentioning how great she was. One came from a staunchly conservative friend who has always been adamantly against a woman president. His message simply, “McCain just won this election. She’s awesome!”

Within a week, McCain went from trailing Obama from several points to leading by a few. The excitement and support was based around one person and that was Governor Palin. This is significant because this marks the only time in modern history (perhaps even all of American history) where the Vice Presidential selection had such a tremendous impact on the race. There was no such excitement surrounding the Senator from Delaware.

A week later, Governor Palin comfortably stepped onto a national stage that she had not spent months or years seeking and rehearsing for and delivered the second most watched (sorry McCain!) and arguably best delivered speech of either convention. Sure, some would argue that Obama’s speech topped Palin, but most of the coverage was spent talking about the setting and the stage props, not about the speech itself. Obama was overshadowed by the image and the moment, while Palin was master of hers.

Palin came out swinging and energized a movement. She did so with a broken teleprompter, something his royal Obamaness could never do as evidenced by his constant reliance on the teleprompter for even the most simplistic events.

Throughout the campaign, as Governor Palin grew in confidence and began “going rogue” by actually discussing Obama’s radical record and view of America. John McCain virtually refused to show up to the election, while Palin demonstrated her true “barracuda-ness.” Everywhere she went she drew top ratings. This is something that those who dismiss her fail to take into consideration in their quick assertion that she is Dan Quayle version 2.0. Dan Quayle never commanded a following like Governor Palin. He never energized anyone. He was almost irrelevant from the start. As a contrast, in many ways this election only started for the GOP when Palin joined the ticket.

Palin also held her own against Joe Biden in the most watched Vice Presidential debate in history. She demonstrated the uncanny ability to tear down her opponent and remain likeable. Ronald Reagan was a master at this. Dan Quayle was decimated by his geezer adversary while Palin headlined her debate, relegating Joe Biden to a supporting role.

Governor Palin’s record in Alaska will only continue to grow over the next few years. She is already scheduled to address the GOP senate-house conference in a move that will give her a chance to demonstrate mastery on national political issues. Look for Governor Palin to continue to do events like this in the coming months and years.

I do not deny that Governor Palin has a lot of ground to cover to re-claim her reputation. The same could be said of Ronald Reagan and George W. Bush at various stages in their careers as well. Many of the same arguments given for Palin’s “slim chances” in 2012 were used against Ronald Reagan before he was elected in 1980. He too was merely a former sportscaster with a college degree from some unknown midwestern college who “lacked gravitas.” He too, only dealt in big picture public policy and didn’t seem to have a grasp of the issues according to the intelligensia (later proved false by his personal diaries and writings.) Fortunately for Palin, as the wheel of history turns on the Obama Presidency a stunning likeness of Jimmy Carter is beginning to take shape. Obama may have fancied himself a Lincoln/Washington/FDR but history is beginning to paint him in the one-term hues of the failed former peanut farming Commander-in-Chief.

Governor Palin has the talent to knock political speeches out of the park. She has the courage to lead even if that makes her unpopular with the party or special interests. She has a remarkable ability to relate to people and draw huge crowds. She has an authenticity to her that has been lacking in recent politics, and indeed will be sorely missed after four years of the dishonesty and “image is everything” mentality of President Obama.

She also has that infectious optimistic love for America that launched the Gipper onto the pages of history. Governor Palin has her work cut out for her, but those who write her off do so at their own peril. Governor Palin is still a force to be reckoned with and she has a plane to catch to Iowa.

White House Releases Test Results After Biden's Condition Raises Questions
Townhall
'All theater. 100% of it': President Biden -- who is sick -- is reportedly out for dinner without a mask
Twitchy
With 'Yes' Votes on a Federal Vaccine Database, 80 Republicans Want to Seal Your Fate—Seal Theirs and Vote Them Out
Redstate
Twitter Censors American Heart Association Article on mRNA Vaccines and Cardiac Health
PJ Media