Last week was a mixed week for Wall Street and the capital markets on a number of fronts. Thanks or rather no thanks to Hurricane Sandy, the North East faced billions of dollars in damages with New York and New Jersey heavily hit by power outages, gas shortages, fallen trees and damaged homes. The storm damage resulted in a shortened trading week for the capital markets given the closure of the New York Stock Exchange and the Nasdaq on last Monday and Tuesday (October 29-30).

The combination of tepid  earnings reports received last week and once again mixed economic data in the form of the October Employment Report and weaker than expected factory orders for October resulted in mixed returns for the stock market last week. Looking at the three major market indices last week, the S&P 500 finished the compressed trading week up modestly while the Dow Jones Industrial Average and the Nasdaq Composite Index both fell slightly.

Friday’s October Employment Report was the last major piece of economic data that we’ll receive ahead of Election Day this Tuesday. Even that report from the Bureau of Labors Statistics was mixed. According to the BLS, non-farm payrolls grew at a faster pace than anyone forecasted, but the unemployment rate ticked up to 7.9% from 7.8% in September. Below the headlines, the October data showed a dip in hours worked and hourly wages; this essentially pointed our the weak quality of the jobs being created.

While many look at the falling trend line in the unemployment rate, digging deeper reveals the disturbing trends that have been responsible for that “improvement.” Not only have we seen the labor force shrink over the last year, but we’ve seen a pronounced pick up in part-time jobs as Americans struggle to make ends meet. In many cases, it has become increasingly difficult to accomplish that given the rise in food, fuel and other prices for other essential goods. Those increases have pressured what disposable income Americans have had, forcing them to make tough decisions. These disturbing trends have also reinforced the idea of The Cash Strapped Consumer, which has been a key aspect of my Rise and Fall of the Middle Class PowerTrend. 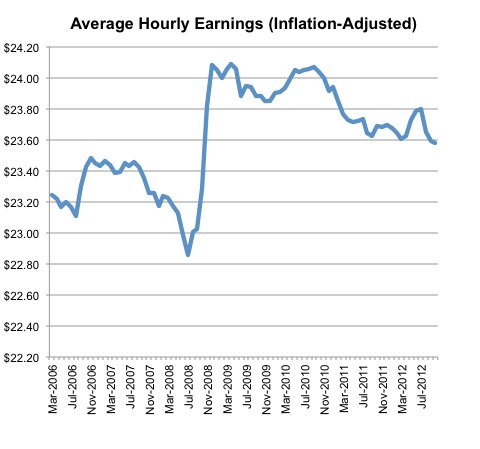 Likely lost amid the Hurricane Sandy flurry of headlines last week was the October reading of Intuit’s Small Revenue and Employment Index. For those that never heard of this report, it measures the change in employment at firms with fewer than 20 employees and is derived using employment data for approximately 170,000 small business employers, a subset of the more than 1 million businesses using Intuit Payroll.

So what did Intuit find?

Small business job creation once again fell in October, marking the fifth consecutive month of month over month declines in Intuit’s Small Business Employment Index. Also falling in October according to Intuit was the number of hours worked. While that metric has been on a steady decline over the last year, the pace of that decline has picked up in recent months.

When the lifeblood of job creation – small businesses – is on the wane, that does not bode well for overall job creation.

Making matters worse, nearly 60% of all S&P 500 companies that have reported their 3Q 2012 earnings results missed revenue forecasts and that likely means job cuts will be back on the table. Already, we’ve heard of job cuts from Colgate-Palmolive, Dupont, Oshkosh Corp., Dow Chemical, and Advanced Micro Devices as well as facility closures from Navistar International, Diamond Foods, Build-A-Bear, Sears, iRobot, Georgia Pacific and others. Keep in mind those announcements were made in last 30 days and prospects for more are high, especially if we fall into the “fiscal cliff.”

The news of those new job cuts and closures set the tone for the Challenger Gray Job Cuts Report for October, which showed a 41% increase in announced job cuts compared to September. There are also growing rumors and innuendo surrounding additional job cuts should the fiscal cliff materialize and the sequestration result in automatic defense and spending cuts.

For what it’s worth, I tend to not look at the unemployment rate published by the Bureau of Labor Statistics. Instead, I prefer to look at what is referred to as the U-6 measure because it includes the “unemployed, plus all persons marginally attached to the labor force, plus total employed part time for economic reasons, as a percent of the civilian labor force plus all persons marginally attached to the labor force.” That metric in my view paints a more accurate picture of what is going on in the domestic economy and more closely mirrors the pain and suffering felt by a large number of Americans. All in all, that rate for October was 14.6% and equates to 46 million Americans dealing with being unemployed or underemployed.

An obvious question – why doesn’t the media report the U-6 number rather than the basic unemployment rate?

I don’t know for sure, but odds are it’s the same answer as to why the Fed dismisses food and fuel when talking about inflation – better optics. It’s not like the U-6 rate is hard to find, the Bureau of Labor Statistic publishes each and every month as part of its monthly employment report.

I believe I can safely say that most investors, traders and Americans would all like to see stronger job creation alongside improving wages and disposable income. Here’s hoping Election Day 2012 puts us back on that path.