https://flic.kr/p/aRwcJn
What do all Americans agree upon but most Democrats are against? Unfettered access to a good public education for their children that includes school choice: Charter Schools.

According to experts and even the president, the best defense against poverty is a good education. So why are most Democrats against school vouchers and charter schools? Because they are more beholden to the Teacher’s Unions than they are to children’s education. They prefer to hold onto the monopoly of public schools and the money its unions funnel into their political coffers, regardless of the mountain of evidence that public schools are mostly failing at producing good results for kids.

It’s uncanny that the Party that creates “rights” for all the various groups of people that they have divided into political blocs, is against school choice rights. They talk of “rights” for same sex marriage, reproductive rights, gender equality, women’s rights, healthcare rights and the list goes on, but not for parents and their children that want school choice rights.

Conservatives believe in the Bill of Rights and that our inalienable rights come from God. But not Leftists that create so-called rights out of thin air to agitate their base into believing they have a real problem and only the Democrats can fix it. They are pros at it and have been for decades but have recently perfected it to a tee by further categorizing Americans into smaller micro-groups. I believe it was the key strategy to winning the White House the last two presidential elections: every micro-group heard their own version of hope and change and believed the words were directed at them.

Personally I despise any tactics that are intended to divide Americans along any lines other than ideology, but especially those that divide us based on race, ethnicity and creed. It’s un-American. The only division I want is a clear difference between Republicans and Democrats or between Democrats. (But for this discussion, I have to use a few of the terms for descriptive purposes but not for dividing.)

School choice and the ability to attend a charter school is one of those issues that divides Democrats, including their staunchest voters: minorities and lower income families. There are numerous examples, most recently the divide between Gov. Cuomo and Mayor Blasio (my bet is on Cuomo), the DOJ suing Louisiana and of course Obama cutting funding for the voucher program in D.C. 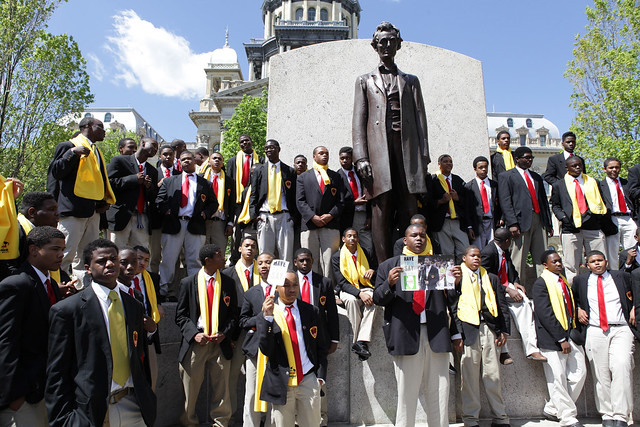 Republicans need to capitalize on the hypocrisy of Democrats that say they want a great education for everyone but continually reject charter schools as a viable option. This has many parents visibly upset at their local and national lawmakers. And rightly so when they see those in authority send their kids to private schools to avoid the subpar schools that their kids would attend otherwise when they just want the same opportunity for their children but can’t afford private schools.

All of the embedded images are pictures I found on Flick.com using the search “school choice”. There were so many but I tried to capture that this is a universal concern for so many parents by showing the diversity in the images. This is not a black or white issue or a Democrat or Republican issue for parents: it’s an issue of giving their children the best chance at succeeding.

This may be Republicans best opportunity to break the cycle of losing the majority of minority votes. They should embrace it wholeheartedly and initiate more charter schools wherever they can and reach out to parents for their thoughts and ideas on how best to implement school choice. Get parents involved and invested in school choice options.

And while this may create a clear difference in policy between our Parties, it may divide some in the Republican Party, most notably Jeb Bush. He stated that he is a staunch supporter of school choice in a Jan. 2014 article in National Review. Even FoxNews.com credits him for opening the first charter school in Florida in 1996.

But the article goes on to question his commitment to school choice given his relentless support of Common Core:

However … Bush is jeopardizing 20 years’ worth of hard-won school choice successes by stubbornly promoting and defending the Common Core math and English learning standards. He doesn’t seem to realize that the one-size-fits-all standards are likely to have the practical effect of making instruction in all types of schools – public, public charter, private and even home schools – depressingly similar and mediocre.

The non-traditional schools will be forced to be less creative in their approach to learning, and will therefore have less value to the public.

I happen to agree with this assessment. If Republicans embrace school choice as a genuine campaign issue and pit Democrats against each other and their voters, well then I’m just fine if Jeb Bush finds himself at odds with the rest of the Party on this issue. I don’t see how he can square his divergent viewpoints.

But this isn’t about Jeb Bush or any one candidate. This is about Republicans showing their true conservative colors on an issue that can improve children’s education across this country and if they take Democrats as prisoners along the campaign trail, it’s all the sweeter.

If they have to call it education rights or school choice rights, I’ll go along with it since even the Supreme Court ruled that every child has a right to a public education. And if they really want to use the Left’s words, state the Democrats are holding kids hostage to a failed public school system and won’t allow school choice for their constituents!

It’s a winning issue, what is known as a pocketbook issue like healthcare; seize the moment Republicans! 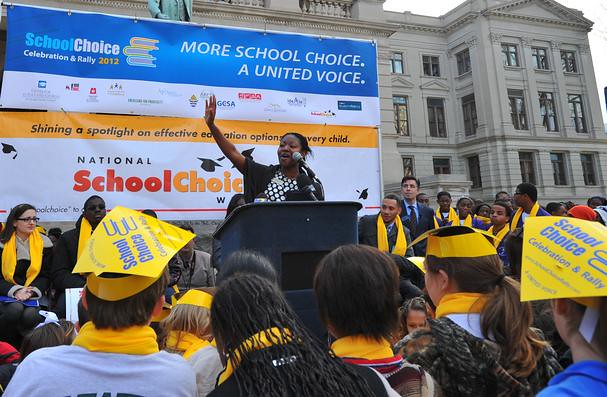