Down the Range: The Wider Point I took for “Act of Valor.” 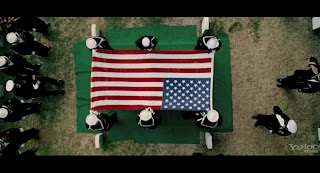 I will just start by saying I was very impressed with the movie “Act of Valor.”  Now that the movie is out, and even before it came out, the independent film had already been critiqued.  I am not going to review the film as attempt to identify a larger point that can be taken form the film.

If you would like a review, Jeff Emanuel’s Red State piece shows depth and an impressive grasp of the details surrounding the film.

I am not going to review the film as attempt to identify a larger point that can be taken form the film.
For those who hated ieven the idea of the film like Huffington Post reporter Jordan Zakarin, cynicism was the order of the day because of what the movie did not show.

“There are a few things it doesn’t have: There are no corrupt officers, no damaged heroes, no queasy doubts about the value of the mission or the virtue of the cause.”

Of course, from a liberal’s perspective, any film that does not show the soldiers coming home wrecked physically and mentally, and thrown in with a twist of the great American bad people – Republicans- starting wars of choice, just cannot be worth its weight in salt.

I rather leave such stuff for others to judge.  I will say the film captures the resplendent nature of our Special Forces as well as that not so shiny side.  As those who receive the freedom the military men and their families sacrifice so much to give us, one can only walk away grateful that the “damn few” put everything on the line when  they go “Down the Range.”   They do this so we can live in a free and just society, one that allows those like Zakarin to marginalize and belittle a film betraying the very act that gives them this right.

The liberals over at Huffington do not want you to see is a film that gives American a glimpse of the dangers the country faces, and the extraordinary lengths they go to keep that from happening.

The part I found so interesting had to deal with the threat of explosive vest wearing terrorist infiltrating across the border of Mexico and into major U.S. Cities with intent on causing economic chaos.

Writing for Reuters,Leah Rozen contends, “If the situation with terrorists is as dire in real life as depicted here, with bloodthirsty enemies of the U.S. lurking everywhere,then what the heck are real Navy Seals doing wasting even a minute of their time making “Valor” rather than getting out there in real life and stopping the bad guys?”

Once again, I am not going to get into the particulars of the debate over whether or not the film should have been made, but I have to bring up the major flaw in this.

It was not that long ago that Federal authorities foiled a plot by men linked to the Iranian government, who aimed to kill the Saudi ambassador to the United States, and to bomb the embassy of Saudi Arabia in Washington.  The plot began with a meeting in Mexico, and involved a situation similar to the one acted out in the movie.  How about the situation in 2005, when the FBI was on the guard for four Chinese men and two Iraqis who were thought to have attempted to smuggled through Mexico a dirty bomb bound for the US.  The authorities do believe that individuals linked with terrorist groups like Hezbollah have entered the United States via Mexico.

The situation in Mexico is dangerous.  Drug cartels are in control over much of the Mexican side, and some fear that parts of the United State also.  They may have reason to fear us if we ever try to fortify the border.  What better way to cause chaos than to assist a terrorist group looking to strike on United States soil.

We are lucky to have the greatest fighting force on the planet, and we are blessed to have them ready and willing to protect us from those who would commit murderous actions on US soil or anywhere else.  When a movie comes along and gives the average American a glimpse into these actions, the last thing in the world they should face is a hostile left wing press. What was in the movie may be real someday, it may already be the case.