Ann Coulter's New Piece is Emblematic of what is wrong with Romney and his Media Cohorts.

Not often do I agree with Alexander Burns over at Politico. Without any “defining South Carolina-Style” moments, nothing happen that will alter the trajectory of the race.

Last night could have been the end of the long nightmare better known as the 2011/2012 Republican debate cycle.  The last debate before the Arizona and Michigan primaries next week could very well be the last debate of the nomination contest.

Therefore, it seems after all these debates and the early voting states, the establishment media still does not get it. 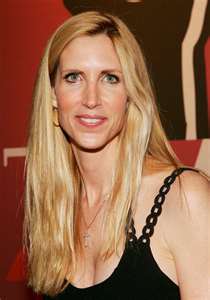 It is probably correct to say that Mitt Romney got the better of Rick Santorum, with the help of Ron Paul and John King.  King set Santorum up to be hammered by the other candidates, and Romney and Paul did the work.  The audience was clearly stacked with pro-Romney people (whether that was the intent or not, who knows), and everything was set up for him to have a big night.

That is not what happened.  Yes, he likely came off looking better in the debate than the other candidates expect maybe for Gingrich.  He should have, after having just about everything he could have to help him.  A better candidate would have excelled, Romney did not, and there is a reason for that.  However, despite this, the media elites still do not get it.

“Severe, strict,” Romney said.  “I was without question a conservative governor in my state.”

This right here is the reason Romney should not be trusted with the nomination.  He cannot even admit the mistakes he has made.  He would rather try to convince voters that they were not mistakes.  It is not just him; it is his advocates in the conservative media.

After naming all the reasons to favor the Romney candidacy, she went on to name the many things Romney has done for conservatism, and failed to name a single thing he did against it.  She even used one of his conservative desecrations and labeled it “the conservative alternative to national health care.”

Coulter claims the establishment has been in opposition to Romney all along:

“The entire NFM (non-Fox media) hate Romney because he is the only candidate who stands a chance of beating Obama.”

That is not all; the Conservative establishment is also opposed to Romney: Sean Hannity, Sarah Palin (because she is a former VP candidate), Rush Limbaugh, and Mark Levin all make this list.

The Republican Party Establishment in Iowa stole the caucus from Romney and handed it to Rick Santorum.  Since Christine O’Donnell, supports Romney while the Weekly Standard editor and Fox News contributor Bill Kristol does not, so according to Coulter, Romney is not advocated by the establishment.  She points to the fact that “Limbaugh, Levin, Sean Hannity (What?), Rick Santorum, Herman Cain, Laura Ingraham, Michael Savage, and many others” supported Romney in 2008 over McCain, as proof Romney is not “closet liberal.”  That is a false dichotomy; there are more than two choices here.  Romney was supported by many as an alternative to McCain.

According to her, those of us who perceive Romney to be the establishment choice do so “simply because they have heard that repeated so often.”  She then moves on to trashing the other candidates, but you can read that for yourself if you care too.

If Coulter was so hot on Romney chances, then why did she say what she did in the video below?

Like Romney, Coulter suffers from the mass record of YouTube videos that can be pulled up at moments notice.

There is nothing extemporaneous about Romney’s delivery, and because of that, he comes off sounding fake.  Conservative already know Romney’s record, it is insulting that he would try to convince them he was anything but the man who once claimed he was an independent during Reagan/Bush, and he is not trying to go back to that.

It is insulting that some conservative pundits try to say the same thing.  As long as people like Romney and Coulter try to persuade conservatives that Romney was a conservative governor, the more these activists are going to tune that argument out.

If Romney is the most electable candidate, then say it.  However, as we just heard Coulter say in the video, Romney has never seemed very electable.  This bewilderment by those who would try to influence others with half-truths and innuendos is getting to the point of hilarity.  They will not see convivial attitudes from working class conservatives until they get a candidate they can accept.

The conservative activist are more engaged and better informed than they were before the advent of the 24-hour news cycle and high-speed internet.  The Tea Party should have taught us this, but some still have yet to feel the winds.