My Response To A Family Member Shocked That I, A Hispanic American, Support The Tea Party Movement

Why Does It Always Come Back To Race? 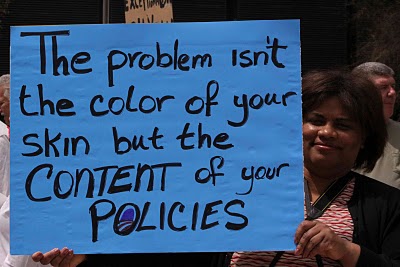 A family member recently left a comment on my Facebook page shocked to find out that I am a staunch conservative and a Tea Party supporter. The hostility was undeniable. His comment demanded to know if I was equally vocal when Bush as he claimed “ran our country into the ground.” He went on to add the usual liberal talking points claiming that Bush left a huge deficit and where was my outrage then. I calmly had to set him straight on the deficit and how Obama has spent half in one year what Bush did his entire eight years in office.

His response quickly got down to the heart of the matter.  He stated that Americans just won’t accept change. Adding….”What I mean by change is a black man as president.” He went on to say that we should be celebrating the fact that a black man was elected president in such a “racist” country instead of protesting.

I was dumbfounded but not surprised. Why does it always come down to race? My intent in writing about this is not to ridicule him but rather to inform those of the same mindset being fueled by the liberal main stream media, why the racism argument is unsound. Out of respect for him I will not share his actual letter but I feel compelled to share my response.

Thank you for taking the time to share your experiences and your concerns. Racism and White Supremacist groups have been around for years and unfortunately ignorance and hate fuel these groups. However, to associate The Tea Party Movement with these groups is completely unwarranted, dishonest and there is a calculate agenda behind injecting the “race card” to try to marginalize, demean and vilify the movement. Furthermore, the Tea Party Movement has not been hijacked by right wing racists. Additionally the fact that a Black man was elected president proves that America is not a racist country.

You mention that in your local protest you observed signs depicting Obama as a monkey, Nazi signs and people chanting racist remarks. I can assure you that this is not representative of tea party members. I am sure that you are aware that there have been left wing sites popping up encouraging people to infiltrate tea parties with misspelled, racist and other equally vile signs to support their ridiculous stereotypes and bias of the tea parties. They came and they failed as tea party members smoked them out and tagged them immediately with signs such as ” I’m not with stupid.”

I have been to tea parties across the nation, California, Nevada, Tennessee, South Carolina, Alabama, Florida. I was at the DC 912 March where over 1 million people gathered and have been to subsequent protests in DC in October and December and not once did I observe what you have cited and what the left leaning media tries to depict. These people are everyday folk who are genuinely concerned about the direction this country is going in. They are mothers and fathers, grandmothers, grandfathers, young and old, independents, moderates, conservatives, Democrats with buyers remorse, Republicans, Atheists and Christians, (yes, you can be an Atheist and a conservative), Blacks, Whites, Asians, Hispanics. This is not a color issue. I was blessed to have attended my local Tax Day Tea Party with a black conservative woman whose sign summed it up beautifully “THE PROBLEM IS NOT THE COLOR OF YOUR SKIN BUT THE CONTENT OF YOUR POLICIES.”

People are not angry because Obama is a Black man. They would be equally outraged if a White mas was trying to fundamentally change our country from the principles in which it was founded on. Are people racist when we appose Nancy Pelosi or Harry Reid? Absolutely not! It is their radical agenda that we oppose. There is a war going on not based on race but on radical liberal progressive ideology versus the principles that this country was founded on based on The Constitution. The left leaning media interjects race into the argument as a red herring. It is quite clear from their extreme biased journalism where they stand on the issues.

It was the Liberal Main Stream Media who viciously attacked Colin Powell and Condoleezza Rice. before each was  appointed as Secretary Of State, He served as the first Black Chairman Of The Joint Chiefs Of Staff , she as the first, not only female, but first black National Security Advisor. No one accused opponents of Powell and Rice of being racist then. They went after these public servants with a vengeance because of their political ideologies pure and simple.

Also Republicans were much vilified for opposing Obama’s nomination of Sonia Sotomayor. Again the left quickly pulled the race card. It’s a pattern. When they are losing the argument….pull the race card. Of course it could have had nothing to do with her history of legislating from the bench. Yet the media has a short memory. Have we forgotten when Bush nominated Honduran born Miguel Estrada for the Supreme Court? The left went after him with a vengeance. Where they screaming racism then? Of course not. So what is the moral of this story? It’s acceptable to oppose conservative minorities but God forbid you appose a liberal minority because you will quickly be attacked, maligned and labeled a racist. The bias and hypocrisy is disgusting.

Where was the outrage when left wing nuts were protesting Bush calling him Hitler, a monkey, a murderer and carrying signs calling for his death? This is not a race issue. The real war is against political ideologies. Here are links to pics of the hate that was unleashed on Bush and the Main Stream Media ignored. I can’t imagine the outrage that would unleash if such hate was found in a tea party protest.

This Administration is the main instigator in perpetuating the racism fallacy. They were effective in using it to demonize the Clintons during the primaries and I think that we can both agree that the Clintons are not racists. Yet Obama and his ilk continue pulling the race card on anyone who is a threat to their agenda. It is shameful how Liberal pundits continue attacking Black  and other minority conservatives who dare to challenge their policies. These people are called sell outs, sambos, house “Negroes”, Uncle Toms, etc. Donny Deutsch of MSNBC was recently suspended for daring to critique Keith Olbermann‘s hateful rhetoric against conservative hosts, but did nothing when Deutsch referred to Marc Rubio, a Cuban American Conservative running for Senator in Florida, as  a “coconut.” You know…brown on the outside white on the inside. This racist term was ignored. Again I cannot imagine the outrage if a conservative anchor had made such a comment.

This is just a sample of the hypocrisy that conservatives endure and quite frankly it’s getting old. My best friends are Black and staunch conservatives who oppose Obama on his policies. It would be hard to apply the racist label on them.  Is racism still alive and well? Absolutely. There will always be hateful, ignorant people that don’t even subscribe to any political ideologies but simply hate because of the color of a person’s skin. You and I as Hispanics have dealt with it all our lives, but I can assure you that I have not witnessed it or experienced it in The Tea Party Movement. I would not associate or support a cause that spews racism. As far as these hateful white supremacist blogs who call themselves Christians, yes they are out there but they are in no way connected to the Tea Party Movement. There are nut balls in every facet of society and my heart is grieved that they would call themselves Christians because I can assure you that a true follower of Jesus Christ would not advocate hate. These people have and will always be around spewing their ignorance.

Just in case you may be thinking that I am merely regurgitating conservative talking points I assure you that  I am speaking from experience. My local eyewitness news ran a hit piece demonizing the Tax Day Tea Parties in Orange County as a bunch of racists. They claimed that one of the black speakers was the only person of color in attendance at the Santa Ana rally. My husband led the attendees in reciting the Pledge Of Allegiance. They completely ignored the fact that, I, his Hispanic wife stood proudly next to him waving the American Flag or the other Blacks and Hispanics in attendance. I was even interviewed by a local Spanish TV station on the reasons that I support the Tea Party Movement. All this was lost by ABC because the truth would not have supported their grotesque biased hit piece.

In response to your comment about why as you stated ” there was no protests when Bush ran the country into the ground in 8 years.” That my cousin is a matter of opinion. I have already explained to you in my comment on Facebook why your statement is not sound as Obama has already spent half in his first year what Bush spent in his entire 8 years in office. However, I will agree with you that he started spending like a liberal his last years in office and his support of TARP paved the way for massive government take over of our financial system. And yes, the apathy from conservatives across the nation allowed this to take root. But no more. The American people have awakened and we will hold our leaders accountable. As conservatives we are demanding that the Republican party go back to it’s conservative roots that Ronald Reagan believed in. We will settle for nothing less. The spending, deficits, bailouts, government takeover of institutions, and weakening of our national defense needs to stop. That’s what the Tea Party Movement is all about. We will no longer vote for someone simple because they have an R after their name. This is about conservative values and ideals and will support candidates who stay true to their conservative roots and will support and defend our Constitution.

I hope that you have a better understanding of where I stand and why I support Tea Party Movement. My hope is that both sides will take the time to get educated on the issues and do their homework on the leaders that are running our country. Knowledge is power and we are blessed to have the Internet at our fingertips so that we no longer have to be brainwashed by either the left or the right. We can arrive at our own conclusions by simply taking the time to educate ourselves with the truth.

Blessings to you and yours.

Woke Is Everywhere: University of Alabama Prefaces Each Play With a 'Diversity Statement'
Alex Parker