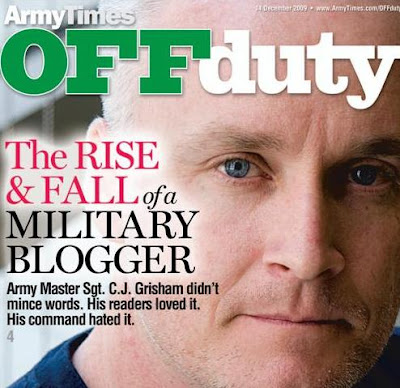 Blackfive Blackout: MilBloggers Supporting CJ Grisham
Posted: 15 Dec 2009 10:59 PM PST
FOR TODAY, Wednesday 16 December 2009, many if not most, fellow milblogs — including This Ain’t Hell, From My Position, Miss Ladybug, Boston Maggie, Grim’s Hall, and those participating in the Wednesday Hero program — are going silent for the day. Some are choosing to go silent for a longer period of time.
The reason for this is two-fold. First, milblogs are facing an increasingly hostile environment from within the military. While senior leadership has embraced blogging and social media, many field grade officers and senior NCOs do not embrace the concept. From general apathy in not wanting to deal with the issue to outright hostility to it, many commands are not only failing to support such activities, but are aggressively acting against active duty milbloggers, milspouses, and others. The number of such incidents appears to be growing, with milbloggers receiving reprimands, verbal and written, not only for their activities but those of spouses and supporters.

Read the rest at Blackfive.