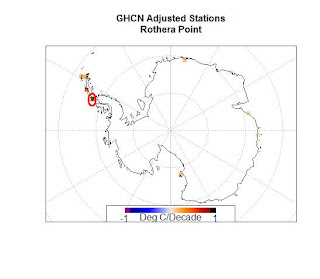 We have all been told that Antarctica is warming at a tremendous rate. Well, one source of the “AGW” scam is the GHCN, the Global Historical Climate Network. And they measured the temperatures in the Antarctic for the last seventeen years at this place, Rothera Station.

FOR THE ENTIRE CONTINENT.

AND ITS NOT EVEN IN THE ANTARCTIC POLAR CLIMATE ZONE.

Its amazing what happens to that “warming trend” when you take location of the sensor and factor in other measurements…..

In case it has escaped those of you that still believe in AGW, this is how big Antarctica truly is: 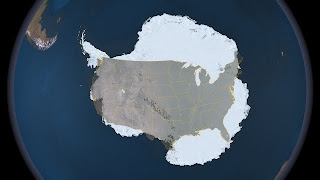 Would you trust the scientists that based the average temperature of the United States measured by one thermometer in Miami, Florida? Let’s add these to the 100 Reasons why AGW is false.
Update!: (Yes, I am that quick)

In case one of you poor, poor deluded fools that still believe that AGW is “settled scien 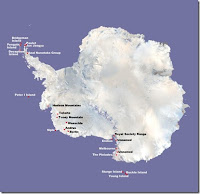 ce” here is what happens when data from MORE Antarctica measurements are reconstructed….

And here is yet a completely different take on the subject of Antarctic warming in the western half: Volcanoes.

Quote of the Decade:

There is a reason why geologists are not included in the IPCC process – we can explain observations using known scientific facts without inventing scientific novelties. The IPCC, by ignoring the geology of the Earth, can then invent novel explanations for the same observations, the existing one being human emission of some CO2.