not all is lost (except maybe the meaning of irony) 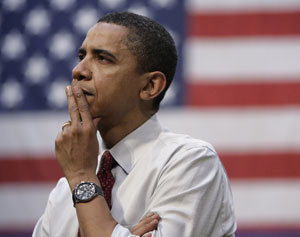 Well, President Obama is at it again, yesterday he gave yet another superfluous speech on the “torture issue” steeped in contradictions and false conclusions. Who knew Obama took the Constitution so seriously? If you have been keeping score thus far in this young president’s tenure, the blaring fact that he has completely thrown out the rule of law, the Constitution, and years of legal precedent while dealing with the economic crisis, may leave you with the conclusion that he is a giant hypocrite for evoking (falsely I might add) these same principals as the justification for ramping down our intelligence apparatus. Unfortunately, consistency of thought is lost on Obama and his supporters. His address yesterday was complete nonsense (as a speech on “torture”), yet not all was lost; in the spirit of Joe Biden, I took large portions of his text, slightly retooled it and was able to assemble a fine speech for our next president to give as a rebuke of Obama’s own reckless unilateral and illegal economic policies. The bold text are my additions, surprisingly not much editing was required. (While reading keep in mind Obama’s recent policies of violating private citizens’ property rights in the restructuring of Chrysler by seizing secured collateral and giving it away to the UAW (5th Amendment, ...nor shall private property be taken for public use, without just compensation), his subversion of the legal process, his hastily voted on economic recovery package, and all the political rhetoric, fear mongering, and dishonesty to justify his unilateral seizure of the American economy. Enjoy)

[…] I believe with every fiber of my being that in the long run we also cannot keep this economy strong unless we enlist the power of our most fundamental values. The documents that we hold in this very hall – the Declaration of Independence, the Constitution, the Bill of Rights -are not simply words written into aging parchment. They are the foundation of liberty and justice in this country, and a light that shines for all who seek freedom, fairness, equality and dignity in the world. […] I have studied the Constitution as a student; I have taught it as a teacher; I have been bound by it as a lawyer and legislator. I took an oath to preserve, protect and defend the Constitution as Commander-in-Chief, and as a citizen, I know that we must never – ever – turn our back on its enduring principles for expedience sake. […] Fidelity to our values is the reason why the United States of America grew from a small string of colonies under the writ of an empire to the strongest nation in the world. […] It is the reason why we’ve been able to overpower the iron fist of fascism, outlast the iron curtain of communism, and enlist free nations and free people everywhere in common cause and common effort. […] Unfortunately, faced with an uncertain economic threat, our government made a series of hasty decisions. And I believe that those decisions were motivated by a sincere desire to protect the American people. But I also believe that – too often – our government made decisions based upon fear rather than foresight, and all too often trimmed facts and evidence to fit ideological predispositions. Instead of strategically applying our power and our principles, we too often set those principles aside as luxuries that we could no longer afford. And in this season of fear, too many of us – Democrats and Republicans; politicians, journalists and citizens – fell silent. […] There are no neat or easy answers here. But I can tell you that the wrong answer is to pretend like this problem will go away if we maintain an unsustainable status quo. As President, I refuse to allow this problem to fester. Our economic interests won’t permit it. Our courts won’t allow it. And neither should our conscience. […] And we will be ill-served by some of the fear-mongering that emerges whenever we discuss this issue. Listening to the recent debate, I’ve heard words that are calculated to scare people rather than educate them; words that have more to do with politics than protecting our country. We are launching a review of current economic policies by all of those agencies responsible […] to determine where reforms are possible, and to assure that the other branches of government will be in a position to review executive branch decisions on these matters. Because in our system of checks and balances, someone must always watch over the watchers[…] […] There is a core principle that we will apply to all of our actions […], we will constantly re-evaluate our approach, subject our decisions to review from the other branches of government, and seek the strongest and most sustainable legal framework for addressing these issues in the long-term. By doing that, we can leave behind a legacy that outlasts my Administration, and that endures for the next President and the President after that; a legacy that ensures economic prosperity. […] Both sides may be sincere in their views, but neither side is right. The American people […] don’t elect us to impose a rigid ideology on our problems. They know that we need not sacrifice our economic security for our values, nor sacrifice our values for our economic security, so long as we approach difficult questions with honesty, and care, and a dose of common sense. That, after all, is the unique genius of America. That is the challenge laid down by our Constitution. That has been the source of our strength through the ages. That is what makes the United States of America different as a nation. […] The Framers who drafted the Constitution could not have foreseen the challenges that have unfolded over the last two hundred and twenty two years. But our Constitution has endured through secession and civil rights – through World War and Cold War – because it provides a foundation of principles that can be applied pragmatically; it provides a compass that can help us find our way. It hasn’t always been easy. We are an imperfect people. Every now and then, there are those who think that America’s economic success requires us to walk away from the sacred principles enshrined in this building. We hear such voices today […] And though we have made our share of mistakes and course corrections, we need to hold fast to the principles that have been the source of our strength, and a beacon to the world.