This is Kevin DeWine's kind of Republican. Kick both of them out of the Ohio Republican Party. 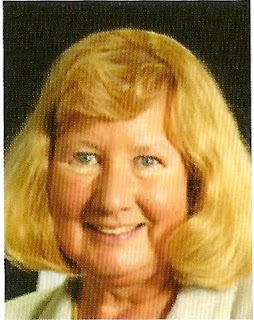 How would you describe someone who chose to stand with Ted Strickland over Ken Blackwell in 2006, and proudly displayed Strickland bumper stickers and signs on their vehicles and property?

Would you call them a Republican? Hardly, right? Well, guess what? Such a person sits on the Ohio Republican Party State Committee. The person in question is Nancy Suhadolnik, wife of Gary Suhadolnik. Not only did Gary go to work for Strickland, he also speaks out frequently against Governor Kasich.

And judging by how much money Kevin DeWine is spending to keep her in her seat, she is the most important person in the ORP. One family in Broadview Heights has now received TEN postcards and 10 robocalls promoting Nancy and the 24th district committeeman Jeff Dean, in just 2 weeks. Remember that TV and radio ad buy I referred to yesterday? That buy alone is enough to buy a new Mercedes. And a person inside the ORP has said that DeWine is willing to spend $100,000 just in Nancy’s 24th district alone.

Check out the first cards sent out. 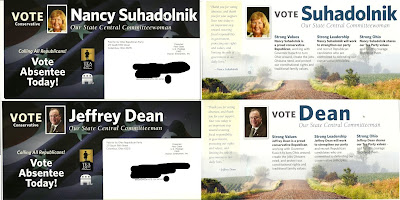 Nancy Suhadolnik is working with Governor Kasich? A complete lie. The Suhadolnik’s have “Tea Party Values?” This is completely offensive. And the dirt road and farms? This is Cuyahoga County. Those don’t exist there.

Just a couple of days later, here come cards 3 and 4. 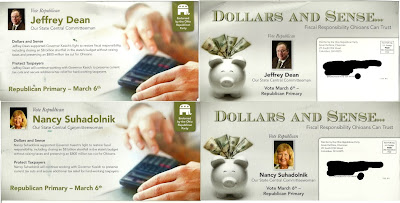 Hey, according to cards 7 and 8, State Central Committee members can bring “new jobs and better opportunities.” 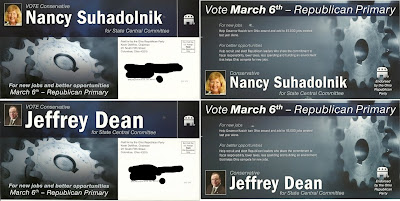 Want to see really stupid? They want us to believe that State Central Committee members have the power to repeal Obamacare. *facepalm* 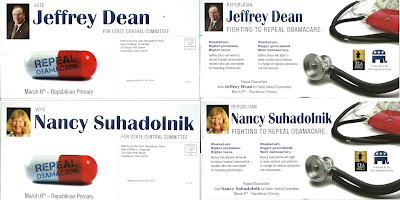 Remember that amendment to change the rules of who could be seated on the committee? Nancy is hiding behind the secret vote. This was her response to a constituent who asked her about her vote:

Thank you for your interest.
The issue was debated and there were many good points made on both sides.
It was voted that this would be a secret ballot and that the votes would remain a secret.
I respect the process.
Sincerely,
Nancy Suhadolnik

I’ll let you draw your own conclusion. My opinion is that she voted for the amendment and doesn’t have the guts to even stand by her decision. She is loyal to Kevin DeWine. Make no mistake about that.

These candidates are for party committee seats. Unpaid positions that meet a few times a year. They aren’t legislators. They dont vote on state laws or budgets. So…why in the world is Kevin DeWine spending up to $100,000 just in this district. Because they have the one power DeWine is interested in above all else. The vote to keep him as chairman or find someone else. Its more important to DeWine to spend that money keep his chairmanship, than it is to defeat Democrats.

So, how do we get rid of Nancy and Jeff? By electing someone to the committee we can trust. If you live in the 24th district, please vote for Stephen L. Sabolich and Kim O’Malley.

What is so special about Steve and Kim? Both of them are unabashed supporters of Govenor Kasich. Steve was one of the founders of the Westshore Tea Party, and a hard worker for Issue 2/SB5 and Issue 3/The Ohio Project. Kim was volunteer of the Year for the Cuyahoga County in 2010, and she was personally responsible for bringing Gov. Kasich to Independence Ohio in support of Issue 2 pre-election. They are true grassroots. They walk the walk, folks. Share this post with every GOP primary voter that you know, and ask them to keep forwarding it on.