It appears that Missouri will remain a Red State in the 2008 election. Not all of the provisional ballots have been counted yet, but McCain remains ahead by approximately 5000 votes and it would take a big turnaround for MO to go to Obama. This is a rather big deal, as MO has been a bellweather state for decades, only missing the winner twice since 1904 (1956 – Stevenson over Ike, and 2008)…the best “bellweather percentage” in the US. MO has moved ever so slightly left from the 2004 election – Kerry won only three counties in MO in 2004…in 2008, Obama won nine, but in both cases, the Dems took the major metro areas of St. Louis and Kansas City, and Boone County, the left-leaning home of the University of Missouri. 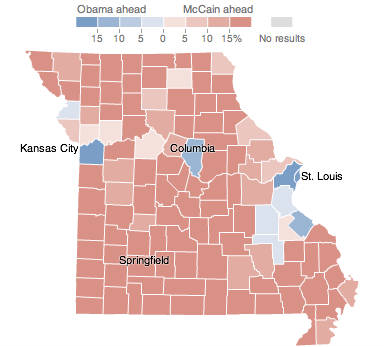 In Missouri’s 2nd Congressional District, Rep. Todd Akin easily won re-election over Bill Haas, whose only prior political experience was as a member of the St. Louis School Board. Akin won with a 62.3/35.4% margin over Haas, wtih the Libertarian candidate picking up the rest, despite the fact that much of St. Louis County strongly favored Obama in the POTUS race. However, most of Akin’s district falls in the more wealthy and more Republican precincts on the west side of the county. His district also extends into St. Charles County and farther north into Lincoln County. Both St. Charles and Lincoln are traditional GOP strongholds, but even they trended farther left in this election. While Obama’s huge rally in October was widely covered as drawing nearly 100K of his acolytes fans, it was not widely reported that a rally for John McCain and Sarah Palin drew over 20K in a small minor-league ballpark in O’Fallon, MO, shortly before the Republican Convention…another sign of the strength of the GOP in my neck of the woods.

Akin was elected in a close race for former Rep. Jim Talent’s House seat in 2000. However, in the subsequent elections, he has seen relatively little competition. And we hope it remains that way.

Akin is one of the House’s most reliable conservative votes. The American Conservative Union has awarded Akin a 97.4% lifetime rating, and 100% in 2007. He is a strong social conservative who votes consistently pro-life. He has a Master’s of Divinity degree from the Presbyterian Church in America’s Covenant Seminary in St. Louis, and he is a member of the PCA…which is fairly indicative of his social conservative credentials. He is what I consider a solid 3-legged stool Republican – strong in all three key facets of conservatism (social, fiscal, and defense).

Just this afternoon, I heard Rep. Akin on KMOX radio, describing his opposition to the GM bailout proposal (listen to the interview here). Akin believes that Chapter 11 is the only way to remedy the structural issues with the GM corporation (expenses, governmental regulations, labor problems, etc.). Contrast Akin’s position with that of US Senator Christopher “Kit” Bond (R), who supports the bailout package. Note: This is not a slam on Sen. Bond – while I don’t particularly agree with him on this one, his conservative record with the ACU is over 80%, which isn’t perfect, but it’s not bad – much better than the Leftist Senator from MO, Claire McCaskill (8% rating from the ACU).

I have been fortunate enough to have good, solid GOP representation in MO during the time we’ve lived here…until the 2006 election, when McCaskill won James Talent’s Senate seat (Talent had served out the remainder of the term of the late Mel Carnahan). It has been quite nice to not have to worry about the vote of my House rep! Unfortunately, the MO governor seat was won by Democrat Jay Nixon, the current Missouri Attorney General – a position given up by current MO Governor Matt Blunt. He will be another one sorely missed by conservatives in Missouri. (One bit of good news from this year – Kenny Hulshof was running against Jay Nixon for the governorship, and his seat was up for grabs. Blaine Luetkemeyer held Hulshof’s seat in District 9 for the GOP, despite the fact that the lefty stronghold of Columbia is in the district. This was a key one for the MO delegation and for the House Republicans.)